The Debate Over Marriage Equality 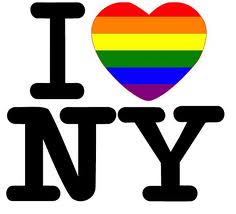 As a native of upstate New York, I have been closely following the latest installment in the fight for marriage equality–and the equally passionate fight by right-wing Christians against it.  I constantly find myself having to prioritize all of the issues of the day in my own mind, and often this issue is considered by some to merely be a devisive distraction.  While I understand the argument by those who may or may not be a supporter of marriage equality that this issue should not take priority over such things as the economy or education, I have to wonder if a nation that [still] systematically marginalizes segments of its population is worth saving.

I suppose I should preface the following with a full disclosure of who I am.  I’m a 30-year-old woman, white, straight, married.  I’m also a Christian.  Yes, you read that right.  Open-minded, “reconciling” Christians do exist!

Let me also wholeheartedly acknowledge that I have many conservative friends and family members (who I love dearly)–and not all of them are opposed to marriage equality, but most of them are.

I would like to counter the two main arguments of right-wing Christians in opposition to gay marriage:

1. “The Bible says that homosexuality is wrong and marriage is between a man and a woman.”

The Bible does in fact make references to homosexuality and marriage.  My response to this argument–SEPARATION OF CHURCH AND STATE!  The new “fad” for conservatives is to keep the U.S. Constitution in their back pockets at all times; yet they seem to think that the Bill of Rights begins with the Second Amendment, claiming that this is a Christian nation, and that we should be governed by Christian values.  Nope, sorry.  Religious freedom is not debatable.  We should be governed by human values that are religiously neutral.  Period.

2. “Making gay marriage legal will redefine marriage for everyone.”

Really?  I didn’t know that such legislation would allow officials to rip you and your “opposite-marriage” spouse out of your home, forcefully divorce you, and then force you to marry a same-sex partner.

Also, doesn’t this just allow for the individual freedom for every couple (gay or straight) to define marriage for themselves?  Don’t all couples already do this?  Some couples define marriage as a necessary evil because they have children and society (or family) tells them it’s the right thing to do.  Some couples define marriage as a financial “contract,” i.e., the elderly rich man that marries the hot, young blonde (she gets the money, he gets to live out his remaining days with a hot, young blonde).  Some define marriage as simply the next step that you take in life after dating for a period of time.  Some even define their marriages as “open,” each with their own set of rules for what is acceptable and what isn’t.

My husband and I don’t fall into any of these categories.  I would consider us to define our marriage as a partnership built on love and a shared passion for making a difference in the world.  The legalization of gay marriage would never change that for us.

My goal is not to change conservatives’ minds about the righteousness of homosexuality or gay marriage (although I wish I could).  All I want to know is, what exactly are they so afraid of?  Just be comfortable with who you are, and live life the way that’s right for you…

And please let others do the same.

Next post: Spurs Deal George Hill to the Pacers