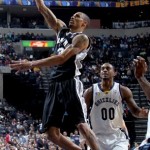 The San Antonio Spurs have tradeed 6th man George Hill to the Indiana Pacers for the draft rights to 6-7 San Diego State forward Kawhi Leonard, 6-10 Latvian forward Davis Bertans, and 2005 second round pick Erazem Lorbek, a 6-10 center playing in Spain.  Leonard the cornerstone of the Spurs end of the deal is an athletic, tough-minded small forward who can play lockdown defense and rebound.  Perimeter defense and rebounding were both areas that the Spurs needed to improve upon coming out of this year’s embarassing first round playoff elimination to the Memphis Grizzlies.  However, George Hill has been a fan favorite in San Antonio.  He had been a solid contributor at both the point guard and shooting guard for the Spurs and is a good defensive player in his own right.  Hill still has so much potential improvement and upside to his game, I would not be surprised if he develops into an all-star caliber player in Indiana where he will most likely be a full-time starter.  During the 2009-10 season, George was dubbed by Spurs Coach Greg Popovich, “My favorite player.”  While I generally keep faith in the decision-making ability of Spurs General Manager R.C. Buford, this trade is a pretty tough pill to swallow.  Leonard is going to have to bring some nasty athletiscism, have a nose for the ball off the glass, and channel the second coming of Bruce Bowen on defense to make me forget about George Hill anytime in the near future.  The one saving grace to losing George is that he is returning to Indiana, his home state where he played both his high school and college ball.  So where does the rest of theLeftAhead Spurs Nation come out on the trade?  Was this a good move?