Join the Fight to FUND OUR FUTURE

As of February 2012, TSEU has collected over 2,000 signatures for the FUND OUR FUTURE petition drive. We are circulating these petitions on the campuses of all of our public institutions to demonstrate that employees, students, parents, alumni, and citizens are serious about Texas fulfilling its obligation to provide quality, affordable public higher education. These petitions will be delivered to candidates and legislators during the 2012 general election cycle. At that time we will ask all prospective legislators for their commitment to make higher education funding a legislative priority in 2013. Download the Petition Here.

In recent months, politicians ranging from Texas Congressman Lloyd Doggett to President Barack Obama have publicly recognized the fact that higher education is critical to the future economic security of our society. In an opinion published in the Daily Texan, University of Texas alumnus Doggett wrote, “Investing in higher education is investing in our competitiveness. … With increased global competition, we should be strengthening our commitment — from pre-K to post-grad — to ensuring we have the world’s most able workforce.” Source: Government Affects Students | The Daily Texan. Addressing an audience at the University of Michigan, President Obama said, “College is the single most important investment you can make in your future.” Source: Obama Proposes Link Between College Aid and Affordability | The Boston Globe.

Unfortunately, many students don’t have the knowledge or skills needed to succeed in college or the workplace, and Texas is failing to invest in our future. While tuition continues to increase at public colleges and universities, the Texas Legislature cut higher education funding during the last legislative session and decreased grant assistance for financial aid. These cuts have led to overworked staff and decreased student services. Teachers and support staff are underpaid, lack job security, and have limited access to benefits like health care and child care. Source: Trends in Student Aid | The College Board. This is bad for university workers, and bad for the students they serve.

The cuts not only reduce university workers’ ability to serve students well, they force students to pay more for their education, potentially putting a college degree out of the reach of qualified poorer and middle-class students. Grant assistance for financial aid matters because the primary barrier to obtaining college education is cost.

Between 1999 and 2010, average tuition and fees at the state’s 10 largest public universities rose by about 120%, to nearly $8,000 annually. According to the Institute for College Access and Success, 58 percent of Texas’ 2009 college graduates were carrying student loan debt — an average of $20,015 each. Source: A Bubble in Higher Education | Fiscal Notes. In 2010-11, graduate students received 19% more in grant aid per FTE student (after adjusting for inflation) than they had a decade earlier. They borrowed 75% more per student in federal loans in 2010-11 than in 2000-01 (see graph below). 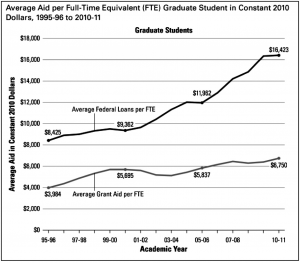 Labor unions are at the heart of the struggle to provide educational opportunities for all. Labor unions helped build the American middle class in the 20th century, and the attack on workers’ rights to organize has led to a decline in middle class prosperity. The labor movement fights against the corporate takeover of public services and the corporate takeover of our democratic political system. Greater union membership and participation means better wages and working conditions for everyone (see graph below). 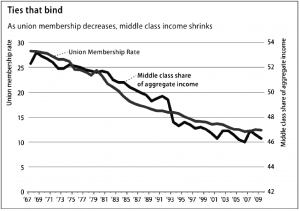 TSEU is actively engaged in the struggle to protect the jobs, pensions, and voices of university workers so that they can provide the best education possible to our students. Our universities work because university workers do, and they are essential to maintaining public institutions of the first class.