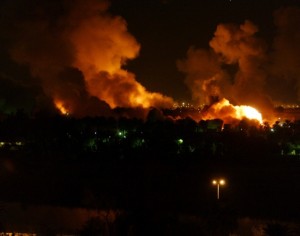 Today, the President of the United States implemented Operation Iraq Freedom to remove Saddam Hussein from power. I have been involved in a world wide peace movement protesting the inevitable series of events that began today. While I will now publicly put my support behind the courage of the armed forces executing this operation, I cannot in good conscience do anything but continue to vehemently oppose the actions of my country’s leadership. My love of this country and my duty as a a patriot compel me to dissent, and compel me to do it loudly and aggressively. I will continue to publish Seeds from the White Rose with a passion for truth and independent voice that I believe is even more vital for America today than it was yesterday. Some might consider it ill form, cowardly, or even un-American to perpetuate division by continuing to print criticism of our leadership during a time of war. I call it liberty. I think its is the very thing that our troops are so bravely risking their lives to defend. In my opinion, our political leadership has recklessly put millions of innocent Iraqi citizens as well as thousands of my American peers in harms way to accomplish goals that are undoubtedly illegitimate and quite possibly illegal under international law. The will of the international community is against the actions of our leadership, yet they are defiantly proceeding. Should you agree with these sentiments, then continuing to voice opposition to President Bush’s actions is the most patriotic thing you can do. Don’t let them guilt you into thinking otherwise. I will continue to fight here at home in the hopes that the message will be received that any blood spilled in the coming weeks is unacceptable. I hope you will too. God bless all the soldiers who are fighting so selflessly on both sides of this war for what they believe in.