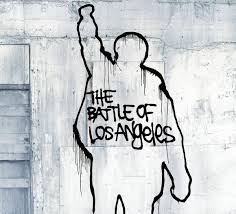 The Battle Of Los Angeles

– Last night, the LA Lakers waved the white flag of surrender rather than making a stand against the San Antonio Spurs in their home city. The #BlackAndSilver manhandled them 120 to 89, dealing the historic franchise their worst home defeat in playoff history. While the writing has been on the wall for some time regarding this disastrous season for the Lakers, keep in mind that this is still the same team that many pundits predicted could win 70 games last summer when Dwight Howard and Steve Nash were brought in to team up with Kobe Bryant.

There isn’t a whole lot to say about the Spurs performance, other than they are rounding into the same type of overpowering machine as last year. This type of systematic dismantling of opposing defenses propelled them to win their first ten playoff games in 2012 without a defeat. Of course, we don’t want to replicate last year’s results. I would much prefer that the Spurs face some adversity earlier in this year’s playoffs. Speaking of adversity, it was really disappointing to hear that Russell Westbrook is out indefinitely. If a rematch of last year’s Western Conference Finals is in the cards, it would be much more gratifying to take on Oklahoma City at full strength. Hopefully Westbrook can get sooner rather than later.

Back to last night’s carnage, my player of the game was Cory Joseph. He has been playing tough and has been active around the basketball throughout the series and is noticeably contributing to the cause. I know that Coach Pop gets plenty of credit for being a genius and what not, but pulling Cory Joseph out of the D-League to become the Spurs starting point guard earlier in the season when Tony was injured was a brilliant move. Pop could have easily filled that hole with a combination of Patty Mills and Gary Neal and just bode the time until Tony returned. Instead, he gave Cory the confidence boost he needed to take his game to the next level and become an effective player. That foresight is paying off in spades right now. Hopefully, Cory can continue to have that Speedy Claxton type high energy presence off the bench behind Tony. If so, we might be looking at lights out, guerrilla radio at the Staples Center tomorrow.