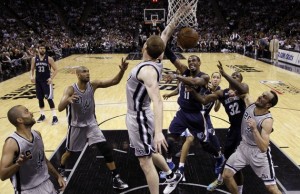 Coming Home – The San Antonio Spurs defense continued to impress yesterday afternoon as they held their opponent to under 92 points and 47 percent shooting for the third straight playoff game defeating the Memphis Grizzlies 105 to 83 in Game 1 of the Western Conference Finals. The Spurs most dominating performance of the playoffs (thus far) came at an opportune time given that this opponent had parlayed a Game 1 theft job in San Antonio into a first round upset just two years ago. From the opening tip, the outcome of this Game 1 was hardly ever in doubt as the Spurs dominated the Grizzlies from the opening jump with the exception of a singular 10 – 0 Memphis run in the third quarter. The Spurs made buckets and locked in on defense which is a lethal combination. While it would be foolish to assume that the Spurs could continue to play at this level for the duration of the series, I don’t think that it is unreasonable to declare that Memphis is incapable of matching the #BlackAndSilver at this level of play. The Spurs played close to their maximum capabilities in Game 1 which is higher than the Grizzlies’ maximum capability. The Spurs are a more talented offensive basketball team. Memphis is a tough, defensive minded group with a lot of heart and they are more than capable of imposing their will to bring San Antonio back down to earth in order to give themselves a chance to take control of this series. But matching San Antonio’s Game 1 level to win this series? Highly unlikely. The Grizzlies don’t appear to have enough weapons on offense to match a Spurs team that is hitting on all cylinders at both ends of the court.

The player of the game yesterday was once again the Red Rocket. After playing limited minutes against the Warriors, Matt Bonner was ready for the Western Conference Finals stage when Coach Popovich called his number. Tony Parker and Manu Ginobili did a masterful job of breaking down the Grizzlies perimeter defense to find open shooters and Bonner along with the other Spurs three point bombers got their work in yesterday by lighting up Memphis for a franchise playoff record 14 three pointers. Matty contributed four of those triples which was huge because it stretched the floor forcing one of the Memphis big men to have to guard away from the paint. Bonner also played tough inside against Zach Randolph and Marc Gasol on defense. While he only had two rebounds, he consistently held his defensive position on the block, which negated the Memphis big men from getting into rhythm and capitalizing on their biggest advantage over the Spurs: size and strength. Zach Randolph finished the game with a mind boggling 2 points on 1-8 shooting. The Spurs can rest assured that Randolph and Gasol will bounce back and play light years better in Game 2, but if we can stay locked in and keep the same focus and intensity, the Spurs will have a great opportunity to board a plane for Memphis on Friday with a 2-0 series lead which is something they were unable to secure two years ago against this opponent. Even if this comes to fruition, Tony Parker clearly will not be satisfied and he will not allow the team to celebrate yesterday’s triumph for one second. He continues to impose levity on the San Antonio locker room by constantly harping on the valuable experience the Spurs gained having had endured last year’s heart break. A reflective Tony was quoted in last night’s post-game press conference informing all who would listen, “Nobody’s happy in our locker room, because we were up 2 – 0 last year and we lost. So it’s just one game.” Tomorrow night is another game. Hopefully it will include another overpowering performance by the San Antonio Spurs. Hopefully we can set ourselves up to be in the same position that we were in last year (2-0 lead in the Western Conference Finals) before the wheels came off. If given the rare opportunity of a second chance, I’m confident the Spurs have the fortitude to seize it. First things first. Here at home, we need to do one. Once it hits your lips.