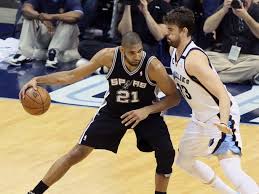 Hustle & Flow – For the second game in a row, the San Antonio Spurs went to overtime against the Memphis Grizzlies and for the second game in a row, Tim Duncan came through in the clutch. The Spurs defeated the Grizzlies 104 to 93 last night to take a 3-0 lead in the Western Conference Finals. The 93 points put up by Memphis is the most that the Spurs have allowed in the last five games (since they elevated their collective defensive play Back to Black in the middle of the Golden State series) and for the fifth game in a row the Spurs held an opponent to under 47 percent shooting allowing Memphis to only shoot a paltry 39.2 percent from the field (38-97). The Grizzlies also had a nightmare night from the line shooting 55.6 percent and missing 8 free throws and a few in critical moments in the fourth quarter that could have helped them secure the win in regulation. In Game 2, Tony Allen was able to sink a pair of clutch free throws to help Memphis force overtime. In Game 3, on two separate occasions in the final two minutes of regulation, he split a pair of free throws. With so much at stake, these are the type of critical misses that can haunt you for weeks if not years upon end. I know that the Spurs have experienced our fair share of these disappointing blown opportunities over the years.

Earlier in the evening, it was the Spurs who were experiencing a nightmare. San Antonio began the game entirely unprepared to play. We looked stuck in neutral as the clearly focused Grizzlies fed off the energy of the FedExForum home crowd to turn the Spurs over eight times in the 1st quarter and take an 18 point lead. Watching this occur felt like Déjà vu. Last year, up 2-0 against the Oklahoma City Thunder in the Western Conference Finals, the Spurs came out flat in Game 3 and suffered a blowout loss (102 to 82) which shifted the momentum in the series. We appeared to be willing to concede a similar Game 3 outcome last night as the Spurs’ starters looked like zombies in the opening quarter and didn’t even seem to be capable of managing the basics such as passing the ball from the point to the wing. Tony Parker, in particular, did not have his head in the game as he committed four of the eight 1st quarter turnovers. Halfway through the abysmal quarter, Spurs Coach Greg Popovich made a decision that most NBA coaches wouldn’t even dare entertain in such an important playoff game; he benched his entire starting five. While the second unit didn’t do a whole lot to get the Spurs back into the game while closing out the quarter (San Antonio still trailed by 16 after the period), the message was clearly received by the starting five. Tim Duncan and Tony Parker, in particular, went on to play dominating basketball the rest of the way. Duncan finished the night with 24 points, 10 rebounds, 5 assists, and 2 blocks and Parker finished with 26 points, 5 assists, 4 rebounds, and 3 steals. Because of his dominant play in overtime, Timmy earned my player of the game honors for the second game in a row. The utter brilliance of the performance of the #BlackAndSilver in the overtime period was a work of art. San Antonio outscored Memphis in overtime 18 to 7 while going 8-10 from the field and 2-2 from the free throw line. Duncan had seven points, a rebound, and the most spectacular assist you could ever hope to see as he through a no-look pass to Tiago Splitter with about two minutes left in OT. Standing with the ball on the high post, Timmy turned his head towards perimeter to pass the ball to the wing and then ripped a pass inside to Tiago for an easy layup. This one play epitomized the consistent excellence that Duncan has displayed throughout this playoff run and especially in the overtime periods of the last two ball games. Timmy is clearly on a mission this postseason and when he’s locked in like this, at this time of year, I begin to count my blessings that he has always and continues to play for San Antonio. Tim Duncan is one of the few all-time great players who will play his entire career for one team and every Spurs fan should feel beyond fortunate that this historic career has been played for our team.

While being up 3-0 in the Western Conference Finals, really any NBA playoff series, is an amazing accomplishment, once again, the Spurs are hesitant to start celebrating a trip to the NBA Finals just yet. There is still more work to be done in Memphis, Tennessee. In the post-game press conference, Coach Pop said that “Game 4 is all that exists for us.” Manu Ginobili pointed out how incredibly blessed the Spurs are to be in this position given that the last two games went into overtime. He said after the game, “We are very lucky to…be 3-0, I mean…I really didn’t expect to be in this situation now.” The Spurs could very realistically be facing a 2-1 hole with Memphis being the team with an opportunity to go up 3-1 by the weekend’s end. Nonetheless, San Antonio is the team in this excellent position, which provides us an opportunity to close out another playoff series. Amazingly, for Tim Duncan, Monday provides an opportunity to close out the 30th playoff series of his career against only 10 defeats. And the days go by, but if we keep our play focused and building towards a crescendo tomorrow evening, the San Antonio Spurs could find themselves in position to write the script for another historic Memorial Day. Same as it ever was.