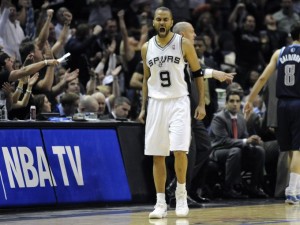 The OtherSide – Within 24 hours of the birth of his first child, son Josh, and on little to no sleep, Tony Parker came up aces in Game 5 of the Western Conference, First Round series with Dallas. The Spurs defeated the Mavericks 109-103 last night at home in front of a fiery crowd at the AT&T Center to take a three games to two lead over our in-state rivals. Congratulations are in order for Tony on becoming a father and on being awarded last night’s player of the game honors. While responding to a question in the post-game press conference about Tony’s whirlwind day, Coach Pop observed, “I think his child was a little more important than the game, but he managed to do ’em both.” Thankfully, for Spurs fans, Coach Pop was right about Parker’s ability to multitask as TP led the Spurs with 23 points and added 5 assists in his strongest performance in the series so far. With 1:52 left in the game, and San Antonio clinging to a four point lead, Tony drained a cold blooded 25 foot three pointer that inevitably put the margin of the Maverick’s seemingly wire to wire deficit too far out of reach for them to pull off a spirited fourth quarter comeback attempt. While Dallas was able to tie the game on a few occasions, they were never able to break through and establish a lead despite the fact that Dirk Nowitzski and Vince Carter shot lights out in the second half. On that note, Vince Carter (a half man – half old as dirt former NBA superstar) has been 100 percent amazing in this series. He has turned back the clock to be, at times, the most dangerous weapon on the court for the Mavericks and is the only reason that this series is not over and the Spurs aren’t enjoying a little rest whilst preparing for a second round opponent. Carter had 28 points on 10-16 shooting last night and went an unbelievable 7-9 from downtown. His shot-making ability has been ridiculous in this series and unfortunately for San Antonio, because of it, we still have to fight to get one more victory against one of the best 8th-seeded teams that the NBA has ever fielded.

Indeed, tomorrow night’s Game 6 and the opportunity to close out the series is shaping up to potentially be a massive challenge for San Antonio. Not only did Dirk find his rhythm for the first time in the series in the second half of Game 5, but couple that with the undeniable fact that Vince Carter’s playoff confidence is currently at an all-time high. Then, add to the equation that DeJuan Blair will be jacked up and will bring an extra little something to the American Airlines Center (energy-wise) in order to give himself another shot at revenge against his former teammates after having served a one game suspension in Game 5 for his dubious impression of Pele on Tiago Splitter’s head during Game 4. Lastly, we must factor in that those loveable Dallas Mavericks fans will be lathered up and foaming at the mouth to do what they can to help their team even up the series and give the Mavs an opportunity to return to San Antonio for Game 7 where they could potentially steal this series. The arena which is housed in a city that is so corporate that it doesn’t even have the originality to come up with its own corporate sponsorship so it shares one with Miami is shaping up to be the epitome of a hostile environment tomorrow evening. But the San Antonio Spurs didn’t amass the best road record in the NBA this season by cratering under the pressure of performing in hostile environments. I fully expect us to have a razor sharp performance tomorrow and put ourselves in a position to win the game and send Mark Cuban fishing. I expect the Spurs sharp shooters to finally find their collective rhythm and for #BlackAndSilver three-point bombs to be free fallin’ from the sky all night long over the city of Dallas. The Mavericks have put up a valiant effort to make the sixth installment of this playoff rivalry another classic confrontation of wills, but despite all of the pageantry that this series has had to offer, I expect it to have become just another playoff battle for future NBA Hall-Of-Famers Tim Duncan and Dirk Nowitzki to add to the memory bank, so they can nostalgically reflect back upon someday, come Saturday morning.