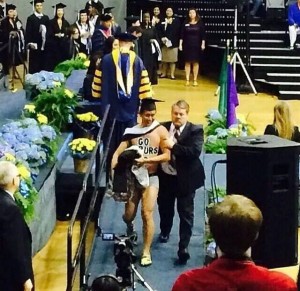 Time Is The Enemy – At the St. Mary’s University graduation ceremony yesterday, one of the graduates ripped off his robe after walking the stage to reveal that he had written “Go Spurs Go” on his chest. Now, besides being hilarious, that was just about as #BlackAndSilver…#playoffs as it gets and, as it turns out, it was also just about the most dramatic thing that happened yesterday with regards to the San Antonio Spurs Western Conference Semifinal match up with the Portland Trail Blazers. For the third time in a row in this second round series, the Spurs did our best to mimic the performance that we had in Game 7 of our first round series with the Dallas Mavericks by pummeling Portland 118-103; this time on their home turf in front of more than 20,000 desperate Blazers fans at the Moda Center. Tony Parker continued to set the tone by jumping on the Blazers early, scoring 8 points on 4-5 shooting in the first few minutes of the game. Because of Tony’s hot shooting at the start, Portland was unable to use the energy of the crowd to establish an offensive rhythm for the game that might have allowed them the opportunity to play from ahead for the first time in the series. While the Blazers led briefly in the first quarter, the Spurs didn’t seem to have a problem reestablishing a lead and once again were able to blow the game open in the second quarter. When it was all said and done, Tony Parker (who was once again the player of the game) had put together another MVP caliber stat line with 29 points on 12-20 shooting and 6 assists.

Even though Portland was able to once again play measurably better in the second half, they were never able to really put the outcome of the game in jeopardy. One of the reasons that the Blazers were never able to turn the corner is that, while they took a page of the Mavericks defensive playbook and used committing a lot of hard fouls as a tactic in trying to slow down the Spurs offense, San Antonio uncharacteristically caught fire from the charity stripe. The Spurs tallied a perfect 25-25 from the free throw line last night which allowed us to fend off the runs that the Blazers were able to put together and maintain a comfortable lead on the score board throughout the second half. In the post game press conference, a befuddled Tony remarked in reference to the Spurs’ perfect free throw shooting, “That’s not going to happen again. We’re one of the worst teams in free throws, ya know?” Whether or not the Spurs might be able to repeat that free throw shooting performance later on during this year’s playoff run, it certainly helped San Antonio put Portland on the brink of elimination heading into tomorrow night’s Game 4. While Portland is capable of putting together a performance tomorrow that would allow them to avoid the embarrassment of a sweep, I’m sure most Spurs fans are well aware of the statistics that the Blazers are facing having dug themselves a 0-3 hole in the series. Even though pretty much every San Antonio fan probably believes that this series is over because no NBA team has ever comeback from down 0-3 in an NBA playoff series, we can also rest assured that these statistics do not comfort Coach Pop and his players one bit and that they are going to show up tomorrow evening focused and determined to go ahead and take care of business in Game 4 so that we don’t have to risk any possibility that we might become the first team to blow a 3-0 lead in an NBA playoff series. Hopefully the Spurs will continue to remain locked into this spiritual plane of basketball Santeria that we have channeled in order to play our best basketball of the season over the course of the last week. After the grueling demands of a seven game war with the Mavericks in the first round, and given that the match up on the other side of the bracket between the Thunder and the Clippers could produce a long, hard fought series, it would benefit the Spurs a great deal to take care of business tomorrow and give ourselves some much needed time of to recuperate and prepare for the Western Conference Finals. With Coach Pop serving as our Babaaláwo, or father who knows the secrets, there is no reason to think that the San Antonio Spurs can’t continue down our path of righteousness and find one more dominant performance tomorrow night to put this series to rest and give ourselves some in the process.