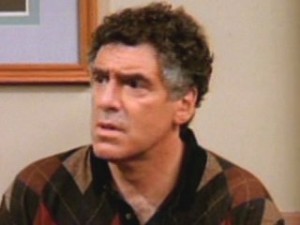 Friends S1:E8 – Hey there, girls and boys. I’m glad to have you back this week for another installment of my Friends blog series. It is really encouraging to see so many of you out there are already religiously reading the greatest experiment in pop culture since Saved By the Bell: The College Years. (Although it is a little less encouraging to find out that only about one-third of you are actually heeding my advice. I mean, I serve up free platters of wisdom on a weekly basis and it stands to reason that most readers would happily take advantage. Apparently not. Although I must say, the world would be a better place if more of you did. But that’s neither here nor there.) What I want to talk about today is the triumphant return of a television program that was thought to have been buried at sea. Congratulations are in order to former-Friends actress Lisa Kudrow on the comeback of her HBO series, The Comeback. Last night, Kudrow’s critically acclaimed show ended a hibernation that makes the Family Guy hiatus seem, in comparison, like a 15 minute power nap. Because it’s not television, HBO aired The Comeback‘s Season 2 premiere last night, the first episode since September 4th, 2005. If you’re not doing the math at home, that’s over nine years off of the air.

The Comeback is the latest entrant into a fascinating fraternity of American television programs that have returned (in various forms) after officially being put to rest. While historically there are other examples, this phenomenon seems to have become a trend that is gaining steam over the last decade. The aforementioned Family Guy was, perhaps, the trail blazer when it returned in 2005 after being cancelled in 2001. Of course, in 2008, Sex and the City fans were treated to the return of Carrie Bradshaw on the big screen after the series run had ended in 2004. Unfortunately, the franchise got greedy and also released a Sex and the City movie sequel in 2010 that turned out to be so bad, it was an affront to the concept of selling out. More recently, Arrested Development made a big splash when it returned for a fourth season on Netflix in 2013 after being cancelled by Fox in 2006. Then, this year, there was the unconventional return of Veronica Mars as a feature length film after being off the air as a television program since 2007. The Veronica Mars film project might have never been realized had it not been for an army of dedicated fans willing to provide grass-roots funding on Kickstarter to see their beloved show resurrected. Finally, who can forget the magical return of Seinfeld, as a fictional reunion episode that takes place inside the larger plot of the seventh season of Curb Your Enthusiasm. The Curb Your Enthusiasm Season 7 Finale (the one that presents the Seinfeld reunion episode) was brilliantly conceived and flawlessly executed and will forever stand as one of the finest moments in American television history.

All of this is to say, as Friends fans, never say never. Who says, just because at this point the Jack Geller character might be buried at sea, that the whole show needs to be. I for one would love to see the Friends comeback episode that has Joey growing old living in a room over Monica and Chandler’s garage. And who wouldn’t be curious to watch Ross and Rachel parent a college-aged Ben Geller-Willick-Bunch and a pre-teen Emma Geller-Green? God knows what Phoebe would be up to these days. So whose with me? This needs to happen. And I’m not talking about a half-hearted attempt by Jimmy Kimmel at fan fiction. Let’s be the change that we’ve been waiting for. Let’s be the change that we seek.

Recap in the Key of Phoebe – This is the one where Ross and Monica’s grandmother dies; twice, Chandler tries to figure out the quality he has that makes people think he is gay, Phoebe informs the gang that using a little yellow pencil allows her to sense the spirit of Debbie (her best friend from junior high who was struck by lighting on a miniature golf course), Rachel wears the shoes that Paolo sent her from Italy, Joey watches the Dallas Cowboys play the New York Giants on a portable TV at Ross and Monica’s grandmother’s funeral, Ross falls into a hole in the ground at the cemetery and then gets loopy at the reception after taking pain medication for his injuries, and Monica’s dad (Jack Geller) informs her that when he dies he wants to be buried at sea.

Chan Man Quip of the Week – [The Setup] At the very beginning of the episode, Chandler is eating ramen noodles for lunch in the break room at his office when Shelley, his co-worker, comes in. Shelley asks Chandler, “Hey gorgeous, how’s it going?” [The Knockout] Chandler looks up at her and (with utter contempt) responds, “Dehydrated Japanese noodles under fluorescent lights. Does it get better than this?”