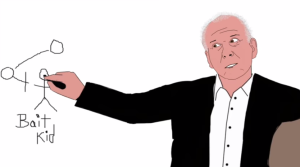 A new and exciting vehicle for expressing adoration for the professional basketball franchise located in San Antonio, TX has emerged on the blogosphere over the past couple of years. What, you ask, is this new phenomenon that I’m referring to? I guess I would most accurately describe it as Spurs Fan Fiction. It is, indeed, a quite recent phenomenon thats arrival I would best pin point to the summer of 2013 during the team’s march back to the NBA Finals for the first time since wining the championship in 2007. In the beginning, much of the fan fiction seemed to have been centered around bloggers using their creativity to poke fun at Coach Gregg Popovich’s cantankerous and sometimes mysterious persona. It seems to have branched out from there to draw inspiration from some of the idiosyncarcies of the Spurs’ Big Three; legends Tim Duncan, Tony Parker, and Manu Ginobili. We here at theLeftAhead have even dabbled in some Spurs Fan Fiction, most prominently with Fourteen Down. The genre seems to be gaining tremendous steam and we couldn’t be happier about it. The latest contribution to this emerging subculture hit the web yesterday and has been turning a few heads. The premise is spectacular. Quoting the video description on YouTube, “This show is about the truth: the San Antonio Spurs are actually a team of covert international commandos.” After reading that, I couldn’t have been more excited about pressing play. After watching it, I felt that the plot fell a little flat but I’ll let you judge for yourself. It appears this might become a recurring series so, if that is the case, I’m not going to worry too much about the story line of this “pilot” not being able to match a promising premise and solid animation. I’m still sold. So check it out and see if you’re sold too. Should this, in fact, become a recurring series, I’ll add the subsequent videos in the comments section of this post. Until next time.