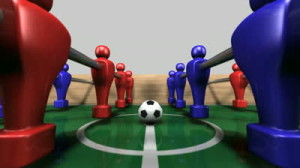 Friends S1:E12 – Howdy, boys and girls. Welcome back for another installment of your favorite Friends blogger’s favorite Friends blog series. I hope you have been enjoying binge-watching the show on Netflix. It has been available via the streaming service for twelve days now which means that many of you might have already sprinted through more than half of the series. A few of you, with too much free time on your hands, may have already streamed the entire thing. If, in fact, you have already binge-watched the complete series on Netflix, I give you mad props for your effort and dedication but I also sympathize with the fact that you have inadvertently tattooed The Rembrandts – “I’ll Be There For You” permanently into your brain. Take it from me (a guy who made this mistake years ago), it really sucks at first but eventually you get used to the song popping into your head out of nowhere, inexplicably and without warning, a couple of times a week for as long as you will live. It’s not so bad. I’ve learned to embrace it. Nowadays, when the song wrestles its way into my thoughts, I just start freestyling my own lyrics. This is a good way to take the power back from The Rembrandts and reassure myself that I am still in control of my own destiny. You can occupy my mind, Rembrandts…but you will never take my freedom! The fact, however, that (because of my affinity for Friends) I’ve probably heard “I’ll Be There For You” more times than any other song in my entire life is quite a sobering thought. Perhaps I should start listening to Bone Thugs-N-Harmony – “1st of tha Month” twenty times a day again (like I did from like 1995 through 2002) so as to overtake The Rembrandts and not give them the satisfaction of topping my “music listening career” play count.

I don’t have a great deal of time to devote to this post (the boss has me tied up with helping theLeftAhead Bot cover a breaking news story) but I am very excited about today’s episode because there is something that I have been needing to get off of my chest for many, many years. Today we are covering the episode where Joey and Chandler purchase the foosball table. Part of the foosball storyline in this episode is that Monica is (hands down) a better foosball player than both Joey and Chandler. She plays them (with Ross as her partner) midway through the episode and then plays them again (on her own against the two of them) at the end of the episode. Both times she wins easily. Given Monica’s competitive nature, it stands to reason that she would be able to get the upper hand on Joey and Chandler on their own foosball table. There is just one problem to this storyline, as it is portrayed on camera, and this problem has bothered me since the first time I saw the episode twenty years ago: Monica is not actually beating Joey and Chandler in foosball in this episode because she is in violation of the rules every time she takes a shot. Monica spins the rods which (besides being a pet peeve of mine) is patently illegal according to the rules of the game. Each time that she scores while spinning the rods, what actually should happen is the goal should “not be counted as a point and [should] be put back into play by the goalie as if the ball had been declared a dead ball between the goal and the nearest two-man rod.” In order to actually score, Monica would need to turn her handle without her rod spinning the player more than 360 degrees during any given shot attempt. This is how civilized people play and win at foosball. Granted, you could make the argument that none of the Friends characters actually know the rules, therefore Monica is in fact better at this lawless bastardization of the game that all involved are complicit in playing. I would argue, however, that there is no excuse for someone as competitive as Monica Geller to not take the time to learn the rules of a game before embarking on the task of dominating her friends at it. There, I’ve said my piece and (after holding that in for twenty years) I now feel much, much better. Have a great week, everyone. On to the recap…

Recap in the Key of Phoebe – This is the one where Rachel plans a weekend getaway with Paolo, Ross decides he doesn’t want to know the sex of the baby he is having with Carol and Susan, Monica tries to get rid of a dozen lasagnas, Joey and Chandler get a foosball table to replace the kitchen table that Joey broke, Phoebe is forced to tell Rachel that Paolo hit on her while she was giving him a massage, and Rachel inadvertently tells Ross that he is, in fact, having a son after she breaks up with Paolo and cancels her weekend getaway to the Poconos.

Chan Man Quip of the Week – [The Setup] Joey and Chandler are at a furniture store trying to pick out a replacement for the kitchen table that Joey broke. Chandler, gesturing at a table with a bird pattern asks, “What about the birds?” Joey responds, “I don’t know, birds just don’t say, ‘Hello, sit here, eat something.'” Chandler, willing to compromise, suggests to Joey, “You pick one.” Joey surveys the showroom floor and counters, “All right, how about the ladybugs?” [The Knockout] Chandler, visibly flabbergasted, shoots back, “Oh, so, forget about the birds, but big red insects suggest fine dining.”

Next post: The San Antonio Spurs Visit the White House