President Obama Speaks at the 50th Anniversary of the Selma Marches 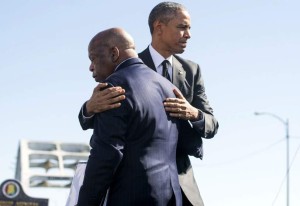 On Saturday, March 7th, 2015, President Obama gave a speech on the Edmund Pettus Bridge at the 50th anniversary of the Selma marches. It was an exceptional address which expressed humble gratitude for the marchers and the enormity of the history that was made on the very same bridge fifty years before on “Bloody Sunday.” The speech offered sober reflection on America’s past while challenging Americans to embrace our responsibility of citizenship for shaping the promise of our country’s future. President Obama forcefully orated qualities of our character as a people that exemplify America’s promise including one brilliant example that we found touching in regards to our pursuits here at theLeftAhead. He exclaimed, “We are storytellers, writers, poets, and artists who abhor unfairness, and despise hypocrisy, and give voice to the voiceless, and tell truths that need to be told.” Indeed we are, Mr. President. And as one of America’s greatest storytellers, Barack Obama’s words continue to inspire all who are open to receiving his message championing America’s promise. To that end, we encourage all of our readers take the time to watch this speech in its entirety below.