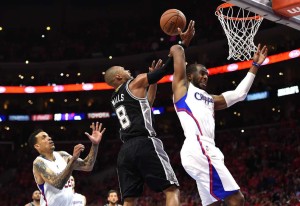 Ready or Not – Whew. Let me catch my breath. It’s been almost 48 hours, but I’m still feeling the effects of all the nervous energy it took to watch the most entertaining game of the 2015 NBA Playoffs thus far. That was big. On the verge of falling into a disastrous 0-2 hole on Wednesday night in Los Angeles at the Staples Center, the defending champion San Antonio Spurs edged out the Los Angeles Clippers in overtime 111-107 in Game 2 of the Western Conference First Round to tie the series at one game apiece. Clippers winning streak snapped. Home-court advantage snatched. Now that we’ve escaped, sleepwalkers awake. All of the pressure in this series has shifted to the third seeded Clippers and their superstar point guard who is desperately hoping to silence his critics by making the first deep playoff run of his 10 year NBA career. Chris Paul did all he could in Game 2. Blake Griffin, his sidekick, also played phenomenally once again save for one costly turnover in the closing seconds of the fourth quarter with a two point lead. That turnover allowed Patty Mills to streak down the court, get fouled, and sink two clutch free throws that tied the game, sending it into overtime, and gave new life to the Spurs in the process.

Up 10 points after a spectacular Kawhi Leonard fade-away jumper with 6:41 left in the fourth quarter, San Antonio seemed poised to bully our way into a comfortable road playoff win. But a combination of Hack-A-Jordan, mindless Spurs turnovers, and going cold from the field at an inopportune time allowed L.A. to claw their way back into the game over the final few minutes and take the aforementioned two point lead. There was a terrible sinking feeling in my gut as we squandered away the lead that harkened back to some of the Spurs’ playoff road meltdowns against the Shaq and Kobe Lakers in the early part of the previous decade. While the contest on Wednesday took place in that same building, this time we stayed the course, kept the faith, and persevered. Patty was spectacular. Playing heavy minutes to help fill a gaping hole caused by losing Tony Parker to an injury and compounded by losing Manu Ginobili on an uncharacteristically boneheaded choice to stop a fast break with a foul when he already had five at the 3:51 mark in the fourth quarter, Mills went 5-9 from the field and a potential season-saving 6-6 from the free throw line for 18 points. The player of the game, however, was none other than Time’s Father himself, Tim Duncan. Timmy just keeps adding to the legend, earning his 100th career post season double-double with 28 points (14-23) and 11 rebounds. He added 4 assists, two steals, and a block to boot. Duncan set the tone early which allowed the Spurs to play with a lead for most of the game. He also helped get San Antonio over the hump in OT with a vintage runner right in DeAndre Jordan’s eye to put us up 101-98 with about three minutes left.

Patty hit four more clutch free throws down the stretch in OT to seal the game. My heart was pounding on each one. This victory was huge for the #BlackAndSilver because now, if we can take care of business at home, we have the inside track to defeat the toughest first round opponent of the Gregg Popovich / Tim Duncan era. I’m looking forward to our first opportunity to defend our home court tonight back in the cozy confines of the AT&T Center. I’m getting ready to get in my zone and make sure we deliver. But before I do, one more thing. Yesterday, Kawhi Leonard was named NBA Defensive Player of the Year. While he seemed like a dark horse candidate given that he had missed 18 games due to injury, the honor is well-deserved because at this point there is absolutely no doubt. The man is the greatest defensive basketball player on the planet, hands down. If you don’t think so, you’re either fooling yourself or you’re simply not watching. Congratulations, Whi. Spurs fans everywhere will be hoping you bring your defensive A game tonight. Against this talented opponent, we’re going to need it.