Joseph Stalin is the Fiddler on the Roof 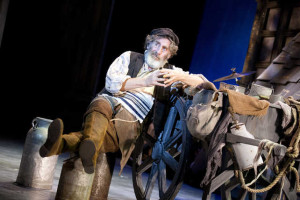 Friends S1:E21 – Hey there, all you friendly connoisseurs of Friends. How’s everyone doing this lovely Monday afternoon? I’m resplendent myself, thanks for asking. It is an exciting time here at theLeftAhead. Not only am I embarking on the stretch run of blog posts for Friends: Season One, but if you’ve been checking in on the site over the past week, you will have noticed that Ted James, our fearless Editor-n-chief, is back writing with a vengeance as part of his annual Black & Silver blog series covering the San Antonio Spurs’ playoff run. Being a Spurs fan is a prerequisite for landing a job at theLeftAhead, so I’d be remiss if (before moving on) I didn’t add, Go Spurs Go! Now that that is out of the way, I’m really excited because there are only four episodes left of Season One to write about over the next four weeks and then I’ll probably be leaving on an extended summer vacation. (Isn’t being a television blogger cool?) Mr. James would prefer me to stick around the offices over the summer and blog about something else other than Friends during the off-season. In his words, “I hired you as a pop culture writer not just to blog about a show that went off the air over 10 years ago.” But (as I was sure to remind him) contractually, he can’t force me to work over the summer so long as I am still fulfilling my obligations to the Friends 20/20 project. So we’ll see. It could be four more Friends blog posts and then peace out until September. Or maybe you’ll see me periodically during the summer blogging about hip hop album releases and summer blockbuster movies. (I mean, did you see the trailer for Jurassic World? I could easily put together 1000 words of sarcasm about that hot mess.) Only time will tell.

Research for today’s episode provided a magnificent opportunity for one of my infamous internet deep dives. Yep, researching Joseph Stalin in preparation for this piece proved to be fertile territory. For example, did you know that Joseph Stalin was born Ioseb Besarionis dze Jughashvili and was an ethnic Georgian? Did you further know that Joseph Stalin was fond of American cowboy movies? Born into different circumstances, who knows. I can see it now. John Wayne and Joseph Stalin are The Night Riders. See, that’s why I’m here. To make jokes about tyrannical Russian leaders while adding to the depth of your historical knowledge. But as hilarious as the subplot of Chandler tricking Joey into taking Joseph Stalin as his stage name was, unfortunately this is also the episode that Ross is forced to say goodbye to Marcel. We talked extensively about Marcel (played by Katie the Monkey who is still thriving in Hollywood to this very day) in a previous blog post but I’d be remiss if I didn’t point out once again that in limited appearances, Marcel is one of the most memorable Friends characters of the entire series run. Unlike Justin Bieber, Ross loves his furry friend enough to try to find him the best possible home when he is no longer able to keep Marcel. He somehow wins the “zoo lottery” and gets Marcel accepted into the San Diego Zoo. The writers create a clever comedic premise of likening Ross placing Marcel in a zoo to a parent getting a child into college. As you will see later in the CMQOTW, the analogy provides Chandler Bing with ample ammunition to deliver razor sharp wit and humor. The other storyline finds Monica becoming friends with a woman who stole her identity in an effort to learn how to live free and in the moment. Aside from Fake Monica trashing on Dead Poets Society (one of my favorite all-time movies), this storyline also proves to be quite entertaining. It is fun to watch Monica operate outside of her comfort zone. And that, ladies and gentleman, is what I’ve got. So (if you’re playing along at home), we are now officially seven eighths of the way through Season One. We’re so close to summer, I can already feel the sand between my toes. Enjoy the recap, etc. and I’ll see all of you history buffs next week. Alas (as close as we are to Summertime), there is still work to be done. Study hard because you never know…they don’t call it a pop quiz for nothing. Carpe diem!

Recap in the Key of Phoebe – This is the one where Monica befriends a woman who has stolen her credit card and her identity, Ross is forced to come to grips with the fact that he can no longer keep Marcel, Joey tries to come up with a new stage name, Rachel and Phoebe help Monica track down the fake Monica, Chandler fills Joey’s head full of embarrassing stage names, the gang says goodbye to Marcel after he is accepted into the San Diego Zoo, and Joey changes his stage name to Holden McGroin after he discover that Joseph Stalin is NOT the Fiddler on the Roof.

Chan Man Quip of the Week – [The Setup] The guys are sitting at Central Perk trying to figure out what to do with Marcel after Ross has received the bad news that he can’t keep him. Joey asks, “Isn’t there any way you can keep him?” Ross replies, “No, no. The vet says unless he’s in a place where he has regular access to some… monkey lovin’ he’s just going to get vicious. I’ve just gotta get him into a zoo.” Joey, continuing his inquisition, asks “How do you get a monkey into a zoo?” Chandler bursts in, “I know that one! No, that’s Popes into a Volkswagen.” Ignoring Chandler, Ross continues, “Well, we’re applying to a lot of them. Naturally our first choice would be one of the bigger state zoos, y’know, like, uh, San Diego… right? But that might just be a pipe dream, because, y’know, he’s out of state. My vet knows someone at Miami, so that’s a possibility.” [The Knockout] Chandler interjects, “Yeah, but that’s like two blocks away from the beach. I mean, it’s a total party zoo.”