You Forgot Your Legs 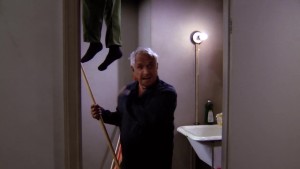 Friends S1:E23 – What’s golden, my friends of Friends? Can you guess why I am excited on this beautiful Monday afternoon? That’s right. You guessed it. Today we are reviewing the penultimate episode of Season One. And you know what that means, right? Exactly. Only one more week until I get a three month break from the cumbersome weekly grind of this project! Yes, yes, y’all. Summer is coming. Now, I don’t want to get the reputation as a slacker or someone who despises his job, but considering that when I proposed the idea for this project to my editor, I did so fully expecting him to reject it. I never intended to have to write for deadlines at theLeftAhead. I was just trying to demonstrate an ability to think outside of the box during the pitch meeting with my editor. Well, the joke was on me when he approved the project and I found myself committed to 24 Friends deadlines a year for 10 years. Nevertheless, I will be one-tenth of the way through my commitment after two more posts so let’s get right down to business, shall we? When we last left our heroes, they were rushing to the hospital to bare witness to the birth of Ross’ son. In this episode, we meet the gang back at the hospital and watch hilarity ensue as Ross and Susan almost miss the birth of their child by accidentally getting themselves locked in a supply closet with Phoebe. Phoebe also puts on hospital worker Ben’s uniform in the supply closet which later gives Ross, Susan, and Carol the inspiration to name their child Ben.

Another important layer to this episode happens as Monica and Chandler are killing time in the waiting room. They joke about being in a relationship. This is the first time in the series that we see these two interact romantically. While the interaction takes place in jest as they are clearly joking about being involved, it raises the question of whether or not this was foreshadowing on the part of the Friends writers or just a coincidence. Put a pin in that for now (they will find themselves interacting in this way again during the beach episodes and before their eventual hook up) but it was definitely worth making a note in this blog series of the first time that these characters flirted with the idea of a relationship. Moving right along, I’m also excited to report that we actually have two Gandalf Gaffes to dissect this week later in the post. So considering that we have some red meat to chew on later and in the spirit of brevity (in other words, getting me one step closer to summer vacation), I’ll close by wishing a happy belated Mother’s Day to all of the moms out there in our readership. Happy Mother’s Day to you too, Carol Willick. Ben is a precious baby boy. Oh, and Happy Lesbian Lover’s Day to you, Susan Bunch. On to the recap…

Recap in the Key of Phoebe – This is the one where Ross gets locked in a closet with Susan and Phoebe while Carol is in labor, Joey befriends a pregnant women whose boyfriend isn’t around to help with the birth, Rachel flirts with Carol’s doctor, Chandler and Monica joke about being in a relationship (hmm…foreshadowing?), Phoebe helps Ross and Susan see the bigger picture while they are fighting and inadvertently puts the idea out there to name the baby Ben, and Ross gets to the delivery room just in time to see the birth of his son right after a janitor informs him, “you forgot your legs.”

Gandalf Gaffes – Today we have a double play! There are two gaffes for the price of one in this episode. Our first gaffe takes place in a conversation between Rachel and Chandler at the hospital. Rachel has just returned from changing into a dress to impress Carol’s doctor (who she was previously flirting with). Chandler asks, “Rachel, what is the deal with you and doctors, anyway? Was, like, your father a doctor?” Rachel responds, “yeah” confirming that her father is indeed a doctor (we come to find out later in the series that Rachel’s father is a heart surgeon). Discovering that Rachel’s father is a doctor in S1:E23 contradicts a phone conversation that she had with him in S1:E17. After Monica (pretending to be Rachel on a double date) informs Rachel’s dad over the phone that she had sex on his bed with Billy Dreskin (presumably an old boyfriend) during freshman year, Rachel calls her father back and attempts to undo the damage. Rachel tells her dad on the phone, “Daddy, why why would I sleep with Billy Dreskin? His father tried to put you out of business.” This conversation insinuates that Rachel’s father is some sort of business owner and not a doctor. It is possible that she could have been suggesting that Billy Dreskin’s father tried to put him out of business as a doctor, but it would not have likely been phrased that way. She might have said something to the effect of, “his father tried to sue you for malpractice.” Therefore, the most likely conclusion is that Rachel’s father was originally conceived to be a business owner in S1:E17 which makes it a Gandalf Gaffe to reference him as a doctor in S1:E23. Since there is a tiny bit of wiggle room to make the argument that Billy Dreskin’s father could have been trying to put a doctor out of business, we will rule this as a level one infraction.

For our second Gandalf Gaffe, it appears that the Friends casting department has tried to slip a fast one by us. In this episode, they use June Gable (the actress who plays Joey’s agent Estelle Leonard) as the delivery room nurse during Carol’s pregnancy with Ben. June had previously appeared in S1:E6 as Estelle Leonard. Here’s where it gets a little tricky. Estelle’s scene was actually cut from the broadcast version of S1:E6 (she doesn’t reappear as Estelle Leonard to make the broadcast cut until S2:E10) but remember, our bible for the Friends universe is the extended versions of the episodes that appear on the DVD release. Estelle’s scene is included in this version of the episode, therefore June Gable has already been established as Estelle Leonard by the time S1:E23 rolls around where casting contradicts an established role by having her play a delivery room nurse. This Gandalf Gaffe is also a level one infraction since it does not directly create a plot contradiction.

Gandalf Gaffe #4: Rachel’s father is referenced as a business man in S1:E17 but that reference is contradicted in S1:E23 when Rachel confirms that he is a doctor.

Chan Man Quip of the Week – [The Setup] The entire gang is in the delivery room with Carol, Ross, and Susan. A nurse, sensing the ridiculousness of having the father’s entire group of friends in the room, announces, “All right, all right, there’s a few too many people in this room, and there’s about to be one more, so anybody who’s not an ex-husband or a lesbian life partner, out you go!” Monica, Rachel, Phoebe, and Joey wish Carol good luck and start exiting the room. Chandler appears to be following them out and then turns around to address the nurse. [The Knockout] He mischievously propositions her, “Let me ask you, do you have to be Carol’s lesbian life partner?”