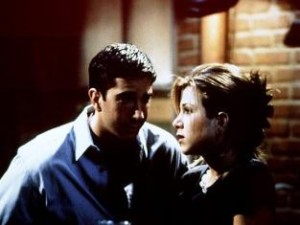 Friends S1:E24 – Buenas noches mis amigos y amigas. I hope everyone has had a spectacular Monday. I know it is somewhat bitter sweet for you to read this knowing that it is our final blog post of the season and our last opportunity to spend time together discussing Friends. But don’t fret. This is, after all, just a season finale and not a series finale. We will be back together again on September 21st. Plus, I have some good stuff planned for us today. Don’t worry. I have no intention to pull a Mad Men and bid you adieu by [Spoiler Alert] showing you a Coke commercial that just leaves you wanting more. When we’re all finished with our business here today, I promise you will leave satisfied. So lets get right into it, shall we? The moment we have all been waiting for has finally arrived. It is the Season One finale and every thing thus far has been leading up to the writers giving us (the audience) what we want. We’ve been waiting all year to see Ross and Rachel finally get together and now (in the season finale) we get to see them kiss and live happily ever after. Wait, hold up…they don’t live happily ever after? Well, at least they finally kiss. One out of two ain’t bad. Wait, hold up again…they only kiss in Rachel’s imagination? Son of a…

Yep, these Friends writers sure do have some nerve. They knew that the audience was expecting to have all of our Ross and Rachel dreams finally come true in the season finale, but (instead of giving us a warm and fuzzy feeling to float through the summer on) they decided to kick us in the teeth by teasing us with Ross and Rachel kissing in day dream sequence and then hitting us with the heartbreaking cliffhanger of Ross deboarding the plane with Julie while Rachel waits to surprise Ross at the gate. I remember watching this cliff hanger twenty years ago when it originally aired and I remember being pissed. I watched it again this morning (for like the 50th time since) and guess what? I’m still pissed. Sure, the cliff hanger served its purpose of making me spend the whole summer of 1995 itching to find out what happens next. But at the same time, the frustration was palpable to know all summer that there was another obstacle keeping Ross and Rachel apart. Damn you, strange women kissing Ross as he’s leaving the airplane! Twenty years ago today, millions of people screamed that in unison at their television screens and just like that, in less than ten seconds of screen time, Julie (played by Lauren Tom) became one of the most-hated character in American sitcom history. We’ll come to learn this fall that Julie is actually a very sweet person, but for now and also for the summer of 1995 (and all the emotional scarring that this cliffhanger caused a pimple-faced teenaged Friends fan)…damn you, Julie!

On that note, it is time for us to start preparing to part ways for the summer. Over the course of this first season, we’ve had a good run. You got to know a little about me (and all my eccentricities), we had some laughs, but most importantly…we got to revisit our favorite TV show in a new and exciting way. I hope you’ve enjoyed the first edition of this Friends 20/20 blog series and I hope you will keep coming back for future installments. We are now 24 posts into our 236 post series, so we still have plenty of room and time to grow this thing into something spectacular together. Sure, other people have blogged Friends on the interwebs already and sure, there are plenty of other places to go in order to celebrate your love of the show. But thanks for giving theLeftAhead a chance to scratch at that insatiable itch for Monica, Rachel, Phoebe, Ross, Joey, and Chandler for a few minutes each week. I’m looking forward to coming back bigger and stronger for Season Two and I’ll hope you’ll be back to continue to be a part of this wacky journey. We may not be the most technically proficient Friends blog series in existence, but I guarantee you we’re the most creatively unique. So, if you looking to continue to make history together, I’ll see you again, dear friend, on September 21st. I’ll be there for you. I’m hoping you’ll be there for me too. Together, the sky’s the limit. But if (for some reason) you’re only here looking to see a half-baked idea for a blog series crash and burn, stop looking [all I do is win].

Recap in the Key of Phoebe – This is the one where the gang throws Rachel a birthday party and she discovers that Ross is in love with her when Chandler accidentally spills the beans, Joey is dating Melanie and decides to “be there for her” while under strict orders from a fertility clinic not to conduct any “personal experiments,” Ross misses Rachel’s party because he has to go to China on a dig, Phoebe gets ahold of a photo of Ross that is meant for Ben and repeatedly uses it to impersonate Ross, and Monica takes over Rachel’s date with Karl when Rachel decides to go to the airport to start looking for Ross as he lands back home after his trip to China.

Chan Man Quip of the Week – [The Setup] The gang is at Monica and Rachel’s apartment and Rachel is opening up her birthday gifts. Ross has already left for China so he is not there but Joey has brought Melanie (the women he is seeing). Rachel grabs a gift and looks at it and informs everyone, “This one’s from Joey.” She looks the present over and continues, “Feels like a book. Thinks it’s a book… feels like a book. And…(as she opens it)…it’s a book!” Phoebe chimes in, “Oh, it’s Dr. Seuss!” Joey, feeling the need to explain, tells Rachel, “That book got me through some tough times.” Melanie, clearly smitten over Joey and their new romance, declares, “There is a little child inside this man!” [The Knockout] Chandler, eager to take Melanie down a peg or two, responds, “Yes, the doctors say if they remove it, he’ll die.”

Next post: President Obama Gives a Eulogy for the Charleston Shooting Victims