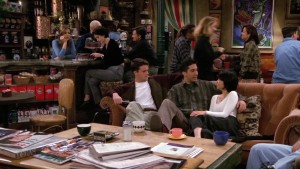 Friends S2:E4 – Howdy, ladies and gents. It’s that time again. That’s right. It’s the time in your week where I methodically give you a refresher on the inner workings of an episode of situational comedy that you first experienced twenty years ago. Every week I ask myself, “is this a necessary exercise?” I know the answer is most certainly no, yet you still flock here in droves week after week to experience Friends in this fresh and exciting way. Your dedication is amazing and gives me the motivation I need to keep trying to spin this ridiculously unnecessary exercise into something meaningful and magical week after week. I’ve been told that you come for the world class analysis of your favorite show but stay for the witty banter. So, thanks. I’m glad that, one way or another, I’m able to entertain you for five to ten minutes each week. Also, in case I don’t say it enough, I appreciate every single one of you (the devoted readers of this blog series). I don’t take your loyalty for granted, so if I’m able to put a smile on your face while we take a few moments to celebrate our favorite television series, then I know I’m doing my job. As long as you keep sending that click count through the roof, I’ll keep breaking my back trying not to let you down by bringing you something new and exciting to chew on each and every week. Deal? Cool.

When we last left our heroes, the Ross-Rachel-Julie love triangle had been momentarily set to the side so the gang could mourn the loss of their beloved neighbor, Mr. Heckles. This week, the Friends writers have returned to their bread and butter, serving up Ross and Rachel drama…buffet style. When Ross confides in Rachel his struggles to get out of his own head and take his relationship with Julie to the next level, Rachel (smelling blood in the water) seizes the opportunity to give Ross some bad advice that could work to her benefit. After discovering that Ross has yet to have sex with Julie, Rachel tries to convince Ross that Julie will find him sexier if he continues to hold out, thus buying herself more time for Ross to rediscover his feelings for her and perhaps end things with Julie before ever taking that plunge. The plan seems a little far fetched but appeared to be working until Ross also sought advice on the situation from Joey. Rachel’s plan is ultimately foiled after she gets Ross all hot and bothered and then watches him jump head first into the deep end of the pool, so to speak. Twice. This development further entrenches Julie into the picture and leaves the audience seemingly further away from finally getting the moment that the show has been building towards for thirteen months: a Ross and Rachel kiss (and no, a daydream sequence kiss doesn’t count).

Recap in the Key of Phoebe – This is the one where Ross seeks Rachel’s advice about his inability to go all the way with Julie, Phoebe finds out her gay husband has recently realized he’s straight and needs a divorce because he is getting remarried, Monica discloses to the gang that Chandler has a third nipple after everyone finds out that her underwear is on the telephone pole from when she was having sex with Fun Bobby on the terrace, Chandler in turn discloses that Joey was in a porno movie to deflect attention away from the embarrassment of talking to the group about his nubbin, and Ross finally seals the deal with Julie…twice.

Chan Man Quip of the Week – [The Setup] Ross and Julie are at Ross’s apartment preparing to have the gang over for dinner. Ross, holds out a bowl to Julie and asks, “Julie, can you hold this for a second, thanks.” When Julie takes the bowl from him, Ross uses his free hands to lean in a give Julie a deep, romantic kiss. In the middle of the kiss, Chandler, Monica, Joey, and Rachel enter Ross’ apartment. Noticing the kiss and sensing the awkwardness of walking into a public display of affection, Chandler decides to confront it directly by saying, “Uh, Julie.” She pulls away from Ross’ kiss and responds, “Yeah?” [The Knockout] Chandler quickly fires back by informing her, “Sorry, you had a paleontologist on your face. But, uh, it’s gone now, you’re alright.”