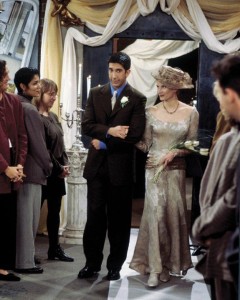 Friends S2:E11 – Greetings, Friends Nation. Happy MLK Day! I hope everyone is enjoying an incredible three-day weekend. After mine started horribly (when I caught a bad case of food poisoning on Friday night), I’ve slowly been able to rally. I was out of commission for most of the past two days, but I had a tremendous time at my local MLK Day parade this morning and my afternoon is proving to be quite lovely as well (especially because I’m getting to spend some of it with you fine people). Some being the operative word. I must admit, our time together this week is shaping up to be quite brief because I’m laser focused on completing this blog post as quickly as possible to clear the way for a much-needed vomit-free relaxing evening. My sincerest apologies, but being that this is my first day back on my feet after being holed up in bed for two days…I’m a little exhausted, not to mention a little loopy. So, now that I’ve served you up a big, steaming bowl of TMI, what do you say we rap about today’s episode of Friends, shall we? Great! We begin with our sad clown Ross who, just when you thought he couldn’t get any sadder, adds some more red lipstick to extend down his frown when he finds out his ex-wife is getting married and is forced to pile that juicy nugget on top of the Jenga puzzle of pain he’s already suffering from because a series of reckless decisions that resulted in him dumping Julie for Rachel but then also losing Rachel. While Ross spends the majority of the episode moping around feeling sorry for himself, he eventually is able to save the day by being there for Carol when her bigoted parents wouldn’t be. He saves the wedding by graciously standing in to give Carol away to Susan, and he saves the reception by balling the roundest and most delicious melons you’d ever want to eat. (On the off chance that you’re reading this without having previously watched the episode, ball the melon is not a euphemism. Get your mind out of the gutter.)

Moving right along…the other significant milestone in this episode occurs when Joey makes his first appearance on Days of Our Lives. As we come to find out later in the series, landing the role of Dr. Drake Ramoray on DOOL will prove to be one of the most pivotal moments of Joey’s acting career. In fact, this gig becomes the gig by which all other gigs are compared. Days of Our Livez (typo intended) becomes the mean that all of Joey’s acting roles regress to, so to speak. From here on out (in Joey’s mind), if he’s acting in anything more prestigious than than a soap opera, his career is on the up-swing and if he’s acting in anything less glamorous than being on day-time television, his career is in the toilet. In other words, this DOOL-ometer (if you will) becomes the mechanism Joey uses to evaluate his career. Now that I think about it, adding the DOOL-ometer as a regular part of this blog series would be a great way to keep tabs on our favorite fictional actor. (Note to Self: Begin measuring Joey’s acting career on the DOOL-ometer for the remaining 201 posts left in the series). And on that note to self, I better wrap this up so I can get on to my much needed holiday weekend relaxation time. Speaking of holiday weekend, I’d be remiss if I didn’t take the opportunity (in observance of Dr. King) to elevate the rhetoric and leave you today with a quote from the great reverend to chew on during the week. Dr. King once said, “It is not possible to be in favor of justice for some people and not be in favor of justice for all people.” With that, have a great rest of your holiday. Talk to you on that next.

Recap in the Key of Phoebe – This is the one where Ross finds out that Carol and Susan are getting married, Rachel’s mom comes to visit and informs Rachel that she’s thinking about leaving her dad, Phoebe is haunted by the spirit of a massage client who died on her table, Joey makes his first appearance on Days of Our Lives, Carol and Susan hire Monica to cater their wedding, Chandler half-heartedly hits on women at the lesbian wedding, and Ross realizes that if he can attend his ex-wife’s wedding and be the one to give her away, he certainly can help to ball the melon.

Ugly Naked Guy Watch – Rachel’s mom notices Ugly Naked Guy playing the cello. In pointing this out to Rachel, she describes him as “an unattractive nude man.”

Chan Man Quip of the Week – [The Setup] The gang and Rachel’s mom are at Monica and Rachel’s apartment. Monica is ordering everyone to help her prepare food for her gig catering Carol and Susan’s wedding. Feeling the pressure of not having enough time to get everything done, Monica bossily barks out, “All right people, we’re in trouble here. We’ve only got 12 hours and 36 minutes left. Move, move, move!” [The Knockout] Chandler grumpily fires back, “Monica, I feel like you should have German subtitles.”