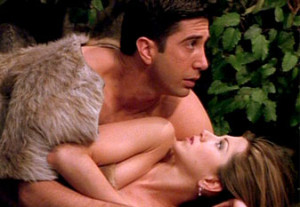 Friends S2:E15 – And the Colorado Rocky Mountain high, I’ve seen it raining fire in the sky.
You can talk to God and listen to the casual reply. Rocky Mountain high, Colorado. Rocky Mountain high? At this point, unfortunately, it’s more like Rocky Mountain Hangover, right Colorado? Nevertheless, how bout them Broncos? Congratulations are in order to all of the football fanatics currently residing in Broncos Country. What an impressive and dominant defensive performance the latter day Orange Crush laid on the Carolina Panthers last night in Super Bowl 50. So if you’re a Broncos fan, welcome and thank you for choosing Friends 20/20 as part of your hangover cure on this beautiful Monday. To everyone else, welcome as well and I hope your post-Super Bowl case of the Mundays isn’t too severe. We’ve got another big episode to cover today, so let’s get right into it. When we last left America’s favorite television couple, Ross and Rachel were making out after having just watched a video the gang had discovered in Monica’s old boxes that showed a Welcome Back, Kotter college version of Ross valiantly trying to save Rachel from being stood up by Chip Mathews for her high school prom. In today’s episode, Ross and Rachel have established themselves as something of an item and are planning out their first official date. Of course, things veer off course when the couple finally gets to the end of said first date. Ross and Rachel arrive back at Rachel’s apartment and start making out, however Rachel begins laughing at Ross when his hands veer down onto her derriere. After that, she cracks up uncontrollably every time he kisses her because she can’t get the image of him grabbing her ass out of her head.

While he is talking to Joey and Chandler about it the next morning, we find out that this unfortunate development has shaken Ross’ confidence that he can be someone who Rachel finds sexy. But, unlike the Carolina Panthers last night, after Rachel apologizes and suggests that they try again, Ross is able to rally on the next date. He devises a brilliant plan at the museum to set an abundantly sexy mood in the planetarium and shows The One After the Super Bowl guest star Chris Isaak a thing or two about wicked games. In other words, Ross seals the deal on all of which he had been dreaming about “since like ninth grade typing.” Rachel and Ross are hilariously woken from their night of passion the next morning by a group of children who are visiting the museum. Predictably, they are naked other than the blankets which they borrowed from Australopithecus. Speaking of our prehistoric ancestor, the magic of Google and Wikipedia tells me that Australopithecus lived in Africa from four million years ago to two millions years ago. They seem like a very interesting species. Ross Geller is lucky to have gotten the opportunity to research them. Also, I recently came across an eye witness account that suggests they were splendid beings. That’s right, boys and girls, according to Larry King, “these guys were very easy to get along with.” BOOM. Nothing like a random cheap shot out of nowhere to get the blood flowing and fight off a day-after-the-super-bowl hangover. So, with that Conan-esque joke about Larry King being old, enjoy your day Broncos Country! Like Cam Newton giving a post-Super Bowl press conference, I’m out.

Recap in the Key of Phoebe – This is the one where Rachel can’t stop laughing at Ross when they’re making out at the end of their first date, Joey splurges on La-Z-Boy chairs and a new TV for him and Chandler after Days of Our Lives picks up his option, Phoebe accuses Monica of being “the smitten kitten” for Dr. Richard Burke (a friend of Monica’s parents) while Phoebe and Monica are catering an event at this house, and Ross and Rachel borrow blankets from Australopithecus while having a magical night together in the museum’s planetarium.

Gandalf Gaffes – Gandalf Gaffes have been few and far between so far in Season Two (trust me, they will begin coming at us fast and furiously as we get further into the series). Despite how much of a scarcity they have been thus far this season, we do have one to discuss in today’s episode. Our gaffe today violates a precedent that, ironically, was established just in S2:E14 (the previous episode). During the prom video, Mr. and Mrs. Geller urge Ross to offer to take Rachel to the prom. After Mr. Geller tells Ross that he has a tuxedo Ross can borrow, Ross protests, “Dad, she won’t want to go with me.” Mr. Geller responds, “Of course she would, you’re a college man.” This interaction between Ross and his father establishing that Ross is in college while Rachel and Monica are attending their high school prom sets the precedent that Ross is ahead of the girls in school. However, in today’s episode, Ross makes a remark to Joey and Chandler that he has had a crush on Rachel since they were in a ninth grade typing class together. In reference to him finally getting to be with Rachel, Ross tells the guys, “I’ve been wanting this since like ninth grade typing.” The insinuation is that Ross and Rachel were in a 9th grade typing class together when Ross first developed a crush on her. Since Ross was in college when Rachel was attending her high school prom, it is clearly a gaffe to suggest that they would have been in a ninth grade typing class together. I supposed one could argue that Ross was alone in the ninth grade typing class but dreaming about an eighth grade Rachel that he happened to have a crush on. To ask the audience to make this leap, however, is a bit of a stretch so we are recording this contradiction as an official gaffe, albeit a level one infraction.

Gandalf Gaffe #7: Ross tells Joey and Chandler that he’s “been wanting this (to be with Rachel) since like ninth grade typing.” The prom video in S2:E14, however, clearly established that Ross is a year ahead of Monica and Rachel in school and would not have been in the same typing class as Rachel.

Chan Man Quip of the Week – [The Setup] The gang is at Joey and Chandler’s apartment. The girls are talking about how sexy Dr. Burke is and Rachel is telling the story of the time he kissed her while Ross is on the phone with someone from his work at the museum. Ross says into the phone, “Woah, woah, woah. Australopithicus isn’t supposed to be in that display. No. No. No. Homo-habilus was erect, australopithicus was never fully erect. [The Knockout] From his seat in the La_Z_Boy and without adjusting his glance (which is fixated on the television), Chandler hypothesizes, “Well, maybe he was nervous.”