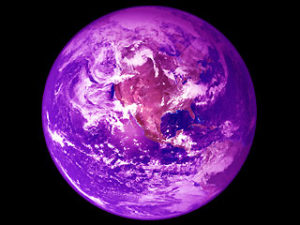 Thieves in the Temple – Friday was Earth Day. One day after the passing of Prince, the world was still blanketing itself in purple showers. A resplendent purple Earth. At least that’s how I imagined our beautiful planet might have looked on Friday from outer space. I spent a fair amount of my day that day thinking about that sort of thing. Thinking about the precious gift that is our natural habitat and how heartbreaking it is that we are destroying it while also thinking about the music of a prince and the color purple. On Friday evening, as I was taking a light rail train to Denver International Aiport during RTD’s grand opening of Train to the Plane, I looked off towards the mountains as the sun was setting to witness some spectacular purples in the sky. Many other passengers on the train were looking over at the sunset as well. Some were taking pictures of it on their phones. There was a communal feel to the moment. On that train we were a group of strangers, yet the desire to discover beauty that is part of our common humanity fortified a bond, admittedly fleeting, but one that gave each of us common inspiration to carry on the airplanes that would leave DIA and disperse us from a singular group of people who had captured a glimpse of beauty together on a train’s passenger car in Denver, Colorado to our varied and unique destinations around the world. Sure, the idea of a purple earth is metaphorical. But to me, the communal experience of discovering beauty with a group of people that then disperse apart and consequently spread the inspiration carried from that shared discovery of beauty across the globe is how and why our planet was purple on Earth Day 2016. We, the passengers of that compartment of that train, took in a little light together while watching the sun rest in purple behind the mountains of the Denver sky and then we traveled into the night to spread our individual flicker of purplish joy around the world.

Around the same time that purple hues were lighting up the Denver sky, the San Antonio Spurs were in Memphis tipping off a game of basketball against the Grizzlies. I must admit, while I was absorbing in the beauty of a magnificent Denver sunset, I was doing so with WatchESPN streaming Game 3 of a certain Western Conference First Round series on the iPhone in my hands. (Hey, just because you’re a deep thinker with a profound appreciation for artistic beauty doesn’t preclude you from having the ability to multitask. Particularly during a Spurs playoff game.) To say I was multitasking on my now infamous RTD voyage to the airport is an understatement. Not only was I taking in the sunset and streaming the game, but I was also reviewing the transcript from a piece of audio collected by one of theLeftAhead’s field reporters earlier on Friday in the Memphis hotel that the Spurs were staying at. Since our resources are very modest here at theLeftAhead, rather than hire a full time sports writer to cover the Spurs playoff run in person, I sent Ken Adams (our Pop Culture writer and currently my only full time employee) to Memphis to cover the series. Ken had to amazing good fortune to somehow get the room right next to Gregg Popovich’s room at the hotel in Memphis where the team was staying. Around 2:00 pm on Friday, Ken also had the amazing good fortune to realize that the walls in this hotel were incredibly thin and he could hear everything that was being said next door in Coach Pop’s room. Being the smart reporter that Ken is, after realizing his good fortune, he immediately hooked up a USB microphone to his computer, put it up against his shared wall with Coach Pop’s room, and started recording audio. The following is a transcript of what he captured on the recording:

Coach Pop: Okay Darryl, yeah I know it would mean a lot to you but no, I’m not going to do it. I don’t care how badly you think you need this. (pause) Trust me, nobody is going to buy a 54 year old making a comeback to pitch in the Majors. If I give you the beans so that you can try to make a comeback with the Mets, our cover will be blown. It’s too big a risk to national security for me to allow it. (pause) Sorry Darryl. (loud banging). Okay Darryl…I’ve got to get off the phone. There’s someone at my door. (pause) Let me know what you find out about the Vladimir Putin operation. (pause) Okay, talk to you later. (pause) Come in.

Kawhi: (again barely audible) I just wanted to let you know that my shot felt really off at shoot around this morning. In fact, this is the worst I’ve ever felt about my shot in my career heading into a playoff game. I know winning this Game 3 is really important so that we can get Timmy, Manu, and Tony some extra rest. I was talking to Danny after shoot around and telling him how my shot felt off and he told me to come and ask you if I could have some magic “irrational confidence” beans?

Coach Pop: Dammit, Kawhi. You’re currently one of the three best basketball players on the [bleeping] planet. There is absolutely nothing about your confidence that is irrational. No, you can’t have any mother [bleeping] beans. Go out there tonight and just let it fly.

Coach Pop: Okay, good. Get the hell out of here.

Kawhi: (you guessed it…barely audible) Hey Coach, why is there a painting of Vladimir Putin hanging in your hotel room?

Kawhi Leonard was red hot on Friday night, shooting 6 for 9 on threes and scoring 32 points (matching his playoff career high) to lead the San Antonio Spurs to a 96-87 victory over the Memphis Grizzlies. When you factor in the 5 blocks and 4 steals that Kawhi registered on the defensive side of the ball, this easily ranks as one of his best playoff performances to date and earns him player of the game honors in the tough nosed, street brawl that was Game 3 of our First Round series. By going into the Grindhouse temple, absorbing haymaker after haymaker from our undermanned opponent, yet still thieving a victory, the #BlackAndSilver now have a commanding 3-0 lead in the series. Today’s game begins in just a few minutes and we can expect the same type of physical, desperate opponent this afternoon that we faced on Friday night. Despite being undermanned, the healthy Grizzlies players still have a great deal of pride and will do everything in their power to avoid having the city of Memphis face the embarrassment of getting swept out of the 2016 playoffs. It is going to take a focused, disciplined effort but if we play Spurs basketball the way we have all season long, in a few hours (like the purple hues behind the mountains of a Denver sunset) we can put this First Round series in the background.