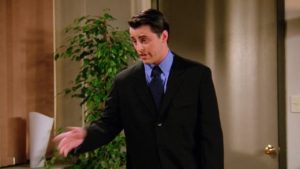 Friends S2:E23 – What it do, Friendsinistas? Hope you’re doing well. We have been keeping mad busy here in the TLA bunker these past few weeks. As loyal readers, you’ve probably noticed that late Spring into early Fall is theLeftAhead’s busy season, so to speak. The reason for that is two of our Feature blog series (Black & Silver and Friends 20/20) start to overlap in late April when the NBA playoffs get going. At least the hard work is paying off. In honor of Charlie Sheen making a cameo in today’s episode of Friends, I’m happy to report that theLeftAhead is WINNING. We’ve been killing it lately with some of the best traffic our little ragtag website has ever seen. It feels good to know the hard work is paying off. Our increase in traffic is thanks in large part to all of you the loyal Friends readers. Also having a bunch of diehard Spurs fans frequenting the site this time of year never hurts. Anyway, just wanted to share the good news. I thought you guys could use a Monday afternoon pick me up (especially if you did your homework in preparation for today’s class). If you watched today’s episode, you might be feeling a little bummed that Phoebe didn’t get to do all the fun stuff she had planned for her and Ryan (the Navy guy played by Charlie Sheen who she apparently hooks up with whenever he’s on leave but who we never ever see again after this episode). When Ross informs everyone (in the Eeyorish way that only Ross can) that Ben has the Chickenpox, Phoebe realizes that she’s also been infected (having never had it) and proceeds to infect Ryan (having also never had it). This ruins all of the plans that Phoebe had for the two weeks Ryan is in town on leave and the two end up spending the whole time hilariously trying to figure out ways to scratch each other’s itches. Even though they are coconspirators in relieving the torture, the discomfort also makes Phoebe and Ryan get on each other’s last nerves. The disastrous rendezvous hits its boiling point when a frustrated Phoebe informs Ryan, “I hope you get a weenie pox.”

Even though we’re all bummed for Phoebe and her predicament in this episode, who doesn’t love the way that Joey turns Chandler’s office into his personal fantasy land? Watching Joseph the Processor Guy brown nose and kiss up to Chandler’s bosses while also unapologetically causing unnecessary problems for Chandler is very pleasing to watch. Better still is when Chandler uses the fictional family that Joey created for Joseph the Processor Guy against him by creating his own fictional character named Chandy. Oh, how the tables have turned? Joey appears completely devastated when Chandler informs him that Chandy is having an affair with Joeseph’s wife Karen. And why wouldn’t he be? It’s pretty easy to predict where Joseph the Processor Guy’s life is headed once he uncovers Karen’s affair with Chandy. Divorce followed by alcoholism followed by getting canned at work followed by homelessness. Meanwhile, Chandy is going to be sitting pretty hanging out with Jeannie (the head of East Coast operations) on his new boat with his new wife Karen. Yep, lucky Chandy will spend his weekends on the ocean watching his adorable step daughters (and getting a kick out of how Brittany copies everything that Ashley does). Then, one day, Chandy, Karen, and the kids will be pulled up to a stop light in Chandy’s BMW when they notice that Joseph the Processor Guy is on the corner pedaling for spare change to buy booze. He appears to be wearing some sort of robe or coat made out of multicolored fabrics that he probably picked up at Good Will. Chandy winks as he holds a $5 bill out the window for Joseph and Joseph swallows his pride and accepts the money (after all, you can buy two forties with a five). Then his biological kids point and laugh at him as they drive off. And, as you have probably guessed, the moral of this story is don’t be the office brown-nosing suck up. Nobody likes that guy. Also, never wear a technicolor dream coat. Unless you’re a hipster in Portland. Then it’s okay.

Recap in the Key of Phoebe – This is the one where Chandler offers to hook Joey up with a job at his company as an entry-level processor, Phoebe’s plans to spend a magical two weeks with Ryan (her Navy guy) while he is on leave from his assignment on a submarine are ruined when she and Ryan contract the Chickenpox, Monica is worried that Richard will get freaked out when he discovers how neurotic she is, Rachel tells Ross that men in uniform turn her on so Ross borrows a sailor outfit, and Chandler attempts to fire Joey after discovering he can’t stand that brown-nosing suck up, Joseph the Processor Guy.

Chan Man Quip of the Week – [The Setup] Joey pops into Chandler’s office on his first day of work at Chandler’s company as an entry-level processor. Chandler asks, “Hey, how’s the first day going?” Joey responds, “Pretty good. It’s like you said. It’s mostly just putting numbers from one column into another column.” Satisfied with Joey’s report, Chandler says, “Well there you go.” Feeling the need to continue, Joey explains, “Hey and everbody is so nice. I just had a good talk with that lady with the red hair, Jeannie.” Caught off guard by this new information, Chandler asks, “Jeannie, the head of east coast operations Jeannie?” Joey answers, “Yeah, turns out our kids go to the same school. Small world huh?” A perplexed Chandler responds, “Weird world. Your kids?” Joey continues, “I figure my character has kids.” An even more perplexed Chandler informs Joey, “You know there isn’t a part of that sentence I don’t need explained.” Joey elaborates, “Well, see when you’re acting you need to think about stuff like that. My character, Joseph the Processor Guy, has two little girls, Ashley and Brittany. Ashley copies everything Brittany does.” Chandler interjects, “Well, invisible kids can be that way sometimes.” Undeterred by Chandler’s sarcasm, Joey continues the fantasy with, “Yeah. Joseph and his wife, Karen, are thinking of having a third kid… Ya know what? Just did.” [The Knockout] Accepting Joey’s premise for his own sarcastic purposes, Chandler hits back with, “Really? Wow. That’s some pretty powerful imaginary sperm you must have there.”