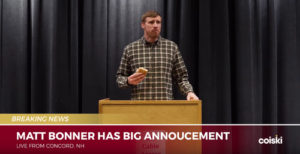 Matt Bonner joined the San Antonio Spurs on June 21, 2006 via trade. The Red Rocket (along with Eric Williams) was traded from the Toronto Raptors for Rašo Nesterović and cash considerations. Despite only averaging 4.9 points in 11.7 minutes during his first season in San Antonio (2006-07), Bonner erupted in his second season to lead the Spurs to their fourth NBA championship, carrying former stars Tim Duncan, Tony Parker, and Manu Ginóbili on his back. His Jordanesque performance in the 2007 NBA Playoffs ushered in a seven year era of superstardom that later inspired Los Angeles Lakers star Kobe Bryant to give Matt the nickname, “Red Mamba.” Bonner’s run of dominance culminated in another legendary playoff run in 2014. Having already carried Duncan, Parker, and Ginóbili for years, the Red Mamba added single-handedly developing the talents of a young Spurs swingman named Kawhi Leonard to his plate while leading the team to their fifth NBA Championship. His legacy now cemented as one of the greatest NBA basketball players of all-time, Bonner receded into the backdrop with the Spurs during his final two seasons while pursuing interests outside of basketball. Most noticeably, Matt Bonner founded and played lead guitar in the critically acclaimed rock band Spuran Spuran. Yesterday, the global basketball community was stunned as Matt Bonner aka The Red Rocket aka The Red Mamba announced his retirement from the game of basketball. As would be expected, it was pandemonium on the scene in Concord, New Hampshire when Bonner delivered the shocking news. Losing a generational superstar such as Matt Bonner has undoubtedly hurt the San Antonio Spurs as they have struggled out of the gate to a 29-7 record in the 2016-17 season. Bonner retires from the NBA with career averages of 5.8 points and 3.0 rebounds. The countdown has begun to the fall of 2022 when Matt Bonner will surely be inducted into the Naismith Basketball Hall of Fame in his first year of eligibility. We can also expect an induction of Spuran Spuran into the Rock and Roll Hall of Fame to be forthcoming, as well, when the band becomes eligible sometime in the 2040’s. In gratitude of the overwhelming support he has received over the years during his legendary basketball career, Matt Bonner released a video to accompany his retirement announcement. The San Antonio Spurs issued the following statement after Bonner’s announcement nearly broke the internet yesterday:

The Red Mamba’s video is posted below. For the banners, for the memories, and most importantly for your sense of humor…thank you, Matt Bonner.