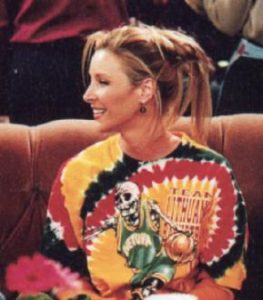 Friends S3:E13 – Greetings, Friendinistas. I hope that day eleven of the resistance finds you well. Let’s start with the good news. On the bright side, we’re still here and, as of today, we’re still free to congregate on these here interwebs to discuss the world’s greatest sitcom. Somebody mark the tape. As soon as I finish writing this post and hit “publish” later this evening, Friends 20/20 will have made its official entrance into Trump’s America. And we’re not just punching the clock to collect a participation trophy. Hell naw. We’re here to Make Making Fun of the President Through Thinly Veiled Pop Culture Blogging Great Again (#MMFOTPTTVPCBGA). Now the bad news. We’re less than two weeks into the presidency of Steve Bannon (err…I mean Donald Trump) and the new administration has already violated the constitution somewhere between a half dozen and two dozen times depending on who’s keeping score. Dear conservatives, first off…how’ve ya been? I haven’t heard a peep from you on social media since Inauguration Day. I wonder why that is? Second, I wanted to personally invite you to Team Sanity. Senators John McCain and Lindsey Graham just joined. In case you’ve been living under a rock and you haven’t noticed, the people are sending the Trump Administration a loud and clear message through the power of collective action. President Trump’s extreme right-wing agenda does not reflect the will of the people and he has no mandate. We, the electorally silenced majority, will not stand idle and watch this band of bush-league misfits shred the Constitution. With all do respect, we resist and will continue to do so until the madness stops. So, once again, my dear conservative friends. Don’t continue to be accounted for on the wrong side of history. Won’t you join us on Team Sanity? There’s plenty of room and I promise we’ll welcome you with open arms. Also, let’s keep it ?. You know you feel a little left out (no pun intended) because our side’s hashtag game is so much stronger than your sides. Come on, give one of ours a try. You know you want to. It will feel so good. #NoBanNoWall

Phew. Now that that is off my chest, what do you say we talk some Friends? After all, I did promise recently to not allow this pop culture blog series to get completely derailed by politics just because we have a reality TV C-list celebrity running the free world. Moving right along, the title for today’s episode comes Straight Outta Star Trek. Chandler and Ross make reference to the science fiction series in response to Phoebe’s dilemma of how to deal with her new beau Robert’s inability to keep his private parts private. For those keeping score, this reference occurs only in the DVD extended-version of the episode (it is omitted from the broadcast-version of the episode). So, if you’re watching along on Netflix as we go and you’re mad that you can’t locate this reference (or numerous others from week to week, for that matter), don’t hate the player…hate the game. Actually, the productive thing to do is to express your dissatisfaction to Friends Executive Producer Kevin S. Bright for making the ridiculous decision to deny devoted fans the extended-version episodes on a streaming platform and instead force us to continue to trot out our tired, grainy DVD copies in order to get the full Friends experience we know, love and deserve to have access to in full HD. Mark my word…at some point in the near future I will launch a campaign to rectify this atrocity but for now, if you don’t have access to the DVD extended-version episodes, you’ll have to play along here. But I digress. Before I went off on a tangent, we were talking about Ross and Chandler’s Star Trek reference describing the no-win situation Phoebe found herself in when she didn’t know whether or not to tell Robert that he’s constantly “showing brain.” This Star Trek term for an impossible situation, boys and girls, is called a Kobayashi Maru. Be sure to write that down because it will be on next week’s test. Also…it makes for a killer blog post title, don’t you think? In the end, Phoebe is relieved of her impossible situation when Gunther, being the hero warrior and sex god that he is, saves the day by demanding Robert “put the mouse back in the house.” Speaking of a Kobayashi Maru, Phoebe’s 1992 Lithuanian Basketball Team t-shirt, tho. Clearly, all of us want to be patriotic Americans (especially during urgent times like these) but how can we choose between love of country and love of the Grateful Dead inspired Lithuanian athletic attire Phoebe is rocking during this episode? Choosing between love of country and love of Lithuanian basketball gear is certainly a no-win scenario if I’ve ever seen one. I mean, I love America but seeing that shirt makes me want to stand up and start spontaneously singing the Lithuanian national anthem. I’m just saying. Finally today, I’ll leave you (as I do from time time) with a juicy topical Friends reference. This one occurred on Conan last week. It involves El Chapo playing the drums and singing I’ll Be There For You. Need I say more? Considering that I’ve probably already set a Friends 20/20 record for clickable links in this post, I’ll do the decent think and embed the video below. Enjoy Coco and El Chapo. Until next week…stay agitated, my friends.

Recap in the Key of Phoebe – This is the one where Phoebe is dating an athletic guy named Robert, Chandler and Ross discover that Robert can’t keep his mouse in the house, Monica and Richard run into each other at the video store and decide to become racquetball buddies, Rachel agrees to read The Shining in exchange for Joey agreeing to read Little Women, and (in the end) Monica and Richard break off their arrangement as racquetball buddies because she still wants kids and he doesn’t which effectively makes their continued relationship a Kobayashi Maru.

Chan Man Quip of the Week – [The Setup] Ross and Chandler are at Central Perk when Phoebe walks in with Robert (her date). Phoebe introduces Robert to the guys and then Chandler, noticing that Robert is wearing shorts in New York during winter, asks him, “So, uh, isn’t a bit cold out for shorts?” Robert responds, “Well, I’m from California.” [The Knockout] Thoroughly unconvinced by Robert’s logic, Chandler fires back, “Right, right. Sometimes you guys just burst into flames.”