What’s a Koondis With You? 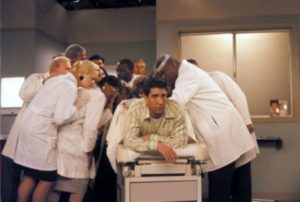 Friends S3:E23 – Hey there, Friendinistas. What’s a koondis with you? Welcome to Week 15 of the resistance. I hope this message finds you well. Our feckless would-be Supreme Leader just celebrated the completion of his first 100 days in office by holding a 2016 campaign rally in Harrisburg, VA at the exact same time he should have been in the audience at the White House Correspondents’ Dinner listening to Hasan Minhaj channel a Michelin Star chef by expertly roasting him like the chicken Ala orange he is, was, and always will be. But enough about our Complainer-In-Chief. We’ll have plenty of time (here at theLeftAhead) to devote to him over the summer after we wrap up the third installment of Friends 20/20 and the fifth installment of Black & Silver. Speaking of Black & Silver and the San Antonio Spurs, our offices have been awfully quiet around here these last couple of weeks as Ted James (your Editor-In-Chief and my boss) has been dutifully blogging away about the 2017 NBA Playoffs from the recesses of his underground bunker rather than writing his Spurs column from here. More power to him but, unfortunately for you, this provides me with a rare opportunity to mail in my assignment this morning, hightail it out of here by noon, and be on a hiking trail somewhere in the foothills of the Rockies by 2:00 pm. Considering that I put a lot of time and effort into the last three posts in the series (or what I’m now dubbing The Chick and The Duck Trilogy), I think I’ve earned the right to half-ass this one. I mean, they can’t all be masterpieces, people. Plus, if you know me (and I think you do) you know that at this time of year I start jonesing hard for my summer vacation. Since this is the third to last post of the third seasons of Friends, I promise I will bring my A game again for the last two and finish up strong. For now, though, I’m off to get in touch with my inner-Guru Saj. In other words, I’m going to go find some weird plants in the mountains, rub them on myself, and see if they give me a rash. And that’s what’s a koondis with me. Also, Go Spurs Go! Catch you next week.

Recap in the Key of Phoebe – This is the one where Ross has a run-of-the mill “third nipple,” Phoebe plays the field dating two guys at once, Joey discovers Pete’s checkbook and tells Monica he wrote a huge check to a ring designer, Monica also finds out Pete has big news to tell her which (coupled with the ring designer discovery) makes her suspect he’s going to ask her to marry him, Rachel thinks Monica should have a money-themed wedding, Chandler gets scolded by Phoebe’s firefighting boyfriend about fire safety, and Guru Saj accidentally slices off Ross’ “third nipple” with his watch and thereby answers the question, “What’s a koondis with you?”

Chan Man Quip of the Week – [The Setup] Joey and Chandler are at home playing with the Chick and the Duck. Ross walks in and asked them to do him a favor by checking out something weird on his body. When Joey and Chandler express hesitation, Ross pleads, “Come on you guys, it’s no big deal!” He starts pulling down his pants and shows something to Joey and Chandler that’s near his derrière. After glancing at it, Chandler makes a “whoa-eeeeeyyy” noise before confusingly muttering, “huh.” Concerned, Ross asks, “Well what is it? Is it a mole?” Joey answers, “No, it’s too wrinkly to be a mole.” Even more freaked out, Ross asks again, “Well, eww. What? Is it a pimple?” This time, Chandler answers, informing him, ” No, it’s… fancier than a pimple. Look Ross, why don’t you just go see a…” At this point Rachel walks in the apartment which startles Chandler and makes him stop mid-sentence. Rachel starts to ask a question but then stops after looking in on the peculiar scene of Ross standing with his pants pulled down while Joey and Chandler are peering over him. She looks perplexed which causes an awkward silence. [The Knockout] Finally, to break the palpable tension in the air, Chandler jokes, “Okay, well, it’s definite, two more weeks of winter.”