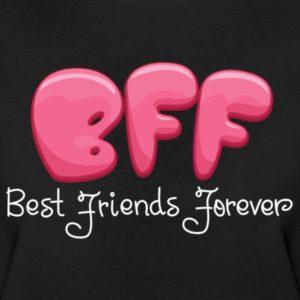 Friends S3:E25 – I’m so excited, and I just can’t hide it. Yo… what is good, Mercedes-Friends. Welcome, welcome, welcome to the Season 3 Finale of Friends 20/20. Considering that these posts are generally three to seven minute reads, you are mere minutes away from our summer vacation. As I mentioned last week, I’m going off the grid somewhere tropical as soon as I hand this column off to my editor. It feels amazing to know that I’m only a few short hours away from being on a beach with an umbrella in my drink. That being the case, I’m ready to get right to it. I thought we’d start today’s festivities by doing something fun. Since I’m writing a season finale titled Best Friends Forever, it got me to thinking about the individual relationships among the main characters on Friends. We know they are a close-knit group but thinking about BFFs begs the question.. Who is the BFF for each of the six main characters on the show? Let’s break it down, shall we? Ladies first. Phoebe’s BFF has got to be Monica. Prior to Rachel entering the group in the pilot, Phoebe and Monica were roommates. Therefore, the fact that Phoebe has known Monica longer gives Monica the edge over Rachel in earning the title Phoebe’s BFF. Of course, once we use that logic to anoint Monica as Phoebe’s BFF, we have to use it to anoint her as Rachel’s as well. Rachel and Monica have been friends since childhood and we just established that Phoebe and Rachel only met for the first time during the Friends pilot. The fact that Rachel has known Monica significantly longer than she’s known Phoebe makes it a safe assumption that Monica is also Rachel’s BFF. Having already earned the title of being both of her best friends’ best friend, the real question here is, Who is Monica’s BFF? Now that’s a real humdinger. While Phoebe and Monica were roommates for a couple of years before the pilot, the fact that Monica has such a history with Rachel dating back to childhood gives Rachel the slight edge. Now for the guys. Joey is pretty easy…Chandler wins this in a landslide over Ross. Don’t get me wrong, Joey and Ross are really good friends but how can that compete with Joey and Chandler being roommates? These two have been close to inseparable during these first few seasons of the show. I mean, come on…they are even raising chicks and ducks together. Moving on to Ross’ BFF, this one is also relatively easy to score based on the logic used to determine the girls’ BFFs. Ross and Chandler were college roommates and have known each other much longer than Ross has known Joey. Based on that, it’s safe to assume that Chandler is Ross’ BFF as well. The fact that Chandler has now joined Monica with having secured the BFF title from both his two best friends means that either Ross or Joey is going to have the dubious distinction of joining Phoebe as the only Friends who are no one’s BFF. While the longevity logic has guided us most of the way through this process, here is where is gets usurped. The roommate bond that Chandler shares with Joey is just too powerful for Ross to overcome with the ammunition that he’s known Chandler longer and was his college roommate. Joey and Chandler are each other’s BFF. It’s not really debatable. You just have to use the eye test to know that, as much as they love their buddy Ross, Chandler and Joey share a next level type of best friendship. For real, this is about more than just jewelry. It’s about the fact that they are best buds. Sorry Ross, maybe you and Phoebe should consider scrapping your previous BFF and becoming each other’s? So to recap…

Wasn’t that a fun game? I knew you’d enjoy it. Much like how you’ll have no idea what tropical island I’m flying off to this afternoon until I reveal it to you when we reconvene in September, Friends: Season 3 ends in a cliff hanger. At the end of our beach episode, Ross needs to choose between staying with Bonnie or pursuing the spark he has going to rekindle his relationship with Rachel. After consulting with Joey and Chandler and making his decision, Ross walks into one of the bedrooms in the beach house to inform the recipient of his heart’s desire that he wants to spend the remainder of the beach trip with her. The only problem is that we, the audience, are not shown who he walks in to be with. We are cruelly left for the summer to wonder if Ross and Rachel are getting back together or not. And this, ladies and gentleman, is how the Friends writers choose to end the most tumultuous season arc of one of the most famous couples in television history. While, obviously frustrating to have to wait, I must admit that these season-ending cliff hangers (that the Friends writers start deploying regularly after successfully pulling off this one) are one of the characteristics of the show that helps set it apart. Having to wait all summer to find out what happens next does wonders for increasing the audiences’ attachment to the characters. There’s a lot for us to learn from Friends‘ brilliant cliff-hanger writing and being that I’m a firm believer in putting knowledge to practice as quickly as possible, it’s time to bid you a fond farewell. I’m on the first thing smoking out to an island that (peering into my crystal ball) may involve a keynote speech delivered by Ross down the road. The name of the island I’m heading to is…[CUT TO CLOSING CREDITS]

Recap in the Key of Phoebe – This is the one where Phoebe invites the gang to go to the beach in Montauk because she is trying to track down a high school friend of her parent’s also named Phoebe, Chandler gets obsessed with convincing Monica that he’s datable, Rachel and Ross start flirting at the beach even though Ross is currently involved with Bonnie, Joey wants everyone to play strip poker and (when Chandler finally gets everyone to play) they all gang up against Joey until he’s stripped of all his clothes, Monica tries to advise Rachel to be careful with Ross, Ross realizes he needs to choose between Bonnie and Rachel after Bonnie shows up at the beach, and Phoebe discovers that her parent’s friend Phoebe is actually her birth mom making them her more than her parent’s BFF.

Chan Man Quip of the Week – [The Setup] The gang is gathering outside of Central Perk when Phoebe arrives in her grandmother’s cab to drive everyone to the beach. After exchanging pleasantries, Phoebe informs Monica, Ross, Joey, and Chandler, “Oh, I am having the best karma this week. First, I find this woman who knew my parents, and then my client with the fuzzy back gives me his beach house.” Suspecting that Phoebe is omitting information, Ross asks, “Yeah? What about uh…that bike messenger you hit?” Phoebe responds matter-of-factly, “Oh, I wasn’t talking about his karma.” Immediately after this, Rachel walks up wearing a ridiculously oversized hat. As she is saying hello to everyone, Joey notices the spectacle and says, “Hey-hey, check out the hat!” [The Knockout] Getting in on the fun, Chandler lampoons Rachel by saying, “What a minute, I know that hat! I was taken aboard that hat! They did experiments on me! I can’t have children!!”