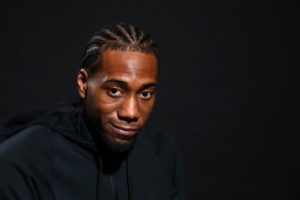 Everyday People – Kawhi Leonard still drives a beat up 1997 Chevy Tahoe that he’s had since high school. Last year, the season after signing a $94,343,126 five-year contract, the All-NBA small forward was asked why he keeps a beater that he once nicknamed Gas Guzzler. His response? “It runs and it’s paid off.” I think it’s safe to say the San Antonio Spurs’ newest franchise cornerstone is as down to earth as our last one. Put another way, he’s an Everyday People superstar. Until disaster struck last Sunday, Kawhi was forcefully (albeit quietly) going about establishing himself as the best basketball player in the world. It’s hard to argue against anointing him the 2017 NBA Playoff MVP. While LeBron James (basketball’s greatest active player) has been putting up similar and arguably better numbers than The Klaw during the 2017 playoffs, Kawhi has been getting his numbers against unquestionably stiffer competition than King James (and in roughly seven fewer minutes per game). As I wrote in Cinco Derrotas, there has been no clearer evidence of Kawhi’s ascension to the top of his craft than the way he was utterly dominating the Golden State Warriors’ four All-Stars during Game 1 of the Western Conference Finals before succumbing to injury in the third quarter. With Kawhi in this series, the Spurs have outscored Dub City 78-55 (+23). Without him, including Tuesday night’s 136-100 Game 2 drubbing, we’ve been outscored by the Warriors 194-133 (-61). I think it’s safe to say that the little Everyday People basketball proletariat that resides in South Texas would be well-served to have our quiet, humble leader back in order to defend our historic River Walk against the gentrification of Silicon Valley’s Golden State basketball bourgeoisie in Game 3 on Saturday night. ?

The player of the game (for the Game 2 massacre) was Jonathon Simmons. Sadly, Juice was the only Spurs starter that brought the proper energy and intensity necessary to compete on Tuesday night. When you’re Everyday People enough to have had to pay a $150 registration fee for a D-League tryout in 2013 (and cashed that opportunity in to the tune of making yourself into a starting small forward in the Western Conference Finals four years later), the proof is in the pudding. You have only one mode: hungry. In an admirable performance filling in for Kawhi, Jonathon put up 22 points (8-18 from the field, 4-5 from deep), three rebounds and three assists in 26 minutes of work. Unfortunately, Juice didn’t get much help from the three former champions (Gasol, Green, Mills) or the five-time All-Star (Aldridge) that joined him in the lineup. As the defacto first option, LaMarcus was particularly disappointing. He finished the contest with only eight points (4-11 from the field) and four rebounds in 27 timid minutes. Immediately after Steph Curry drained a 27 foot three pointer to double up the Spurs 20-10, Coach Pop pulled LA for David Lee having seen no signs of life from his featured scorer in the opening frame. Having the very same player who, five days earlier, had delivered a massive game to close out the Rockets look utterly flustered by the Warriors defensive schemes on Tuesday was too big an issue for the wounded Spurs to overcome. The writing was on the wall. In other words, eight minutes into the game…you could already see the white flag sticking out of Pop’s pocket.

With the second half devolving quickly into an extended garbage time free-for-all, our other noticeable bright spot was the play of Davis Bertans in the latter stages of the game. Once a throw in the infamous Kawhi Leonard for George Hill draft day trade in 2011, the Latvian rookie (who’s previous worldly Everyday People basketball stops include Riga, Union Olimpija, Partizan Belgrade, and Laboral Kutxa Baskonia) shot a perfect 4-4 from the field (3-3 behind the arc) to collect his 13 points in 17 minutes. He collected four rebounds, an assist, a steal, and a block for good measure. I don’t have much else to say about Game 2 except that the result was not surprising. There is a high risk for this type of result – a blowout loss – in the game immediately following a heartbreaking playoff defeat. Considering that we coughed up a 25 point lead in the preceding game to find ourselves in a 0-1 hole and came into Tuesday’s game knowing we would be going to battle without the best player in the world (not to mention our starting point guard, Tony Parker, as well), in the end it was fool’s gold to think Game 2 could be got. Whatever, let it be. Thankfully by the time Game 3 tips tomorrow evening, we will have had four days to regroup and get ready to defend our house and the dignity of Everyday People against the excesses of the Gluttony of More Warriors. I still believe that the #BlackAndSilver are going to win this series if we get Kawhi back healthy. If we don’t get Kawhi back, clearly it’s going to take a few breaks going our way for once in order to win the series but I’ll keep hope alive no matter what the circumstances. (By the way, I believe we’re winning Game 3 whether Kawhi plays or not.) Despite all of the odds that feel stacked against us (just one short week after feeling invincible upon closing out the Rockets), I know one thing. We have more championship heart on our side than the Warriors do on theirs. That can go a very long way to offset a deficiency of talent. Anyone who can turn down the noise coming from the “experts” long enough to understand this also understands the series is far from over. San Antonio does not go down without a fight. Period.

I also can’t help but assume that the Basketball Gods aren’t through weighing in on this series. As I was watching Golden State’s All-Star quartet obnoxiously celebrate on Tuesday night each time they mercilessly battered our wounded heroes with another backdoor cut for a layup or long-range bomb, I couldn’t help but wonder, what is the freaking point of this exercise? Nobody gains anything from it. If Kevin Durant wins an NBA Finals with this Warriors squad, in the minds of many including me, he’s still not a champion. Champions don’t take the path of least resistance to win their first title. Champions pick themselves back up when they’ve been knocked down and persevere. What Kevin Durant did last summer is the basketball equivalent of joining forces with the Russians to get elected president. On the other side of the equation, if the Warriors win another NBA Finals now…they’re no longer the homegrown group of underdogs that developed into champions together only to set their designs on becoming a dynasty. They’re now just a one-time champion that needed to add Kevin Durant in order to make it back to the top. As a basketball historian and purist, I find the whole thing an exercise in futility. If you value the right things like handwork and integrity, the marriage between Durant and Dub City is a no-win. Of course, you may not be surprised to learn that they have different values over there in Silicon Valley. They value things like instant gratification and flashy new toys. You know, the types of things us Everyday People can’t afford to value. Perhaps, in the end, we will discover that the Kawhi Leonard injury was not a curse but actually a gift from the Basketball Gods to further build up our championship pedigree – to further refine our ability to pick ourselves back up and persevere. Perhaps, in the end, the Basketball Gods will also deliver us the greatest gift an organized proletariat can receive: the gift of an overconfident and entitled opponent. The Golden State Warriors haven’t faced one-twentieth of the adversity that the San Antonio Spurs have faced in the 2017 playoffs. As a consequence, we are much better prepared than they for the champion-making trials and tribulations still to come in this series. On Tuesday, we got knocked down once again. Tomorrow, we carry on.