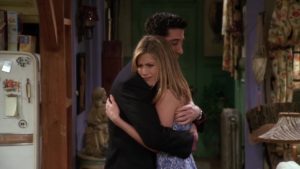 Friends S4:E20 – Hey friendlies, the most amazing thing happened to me earlier on this fine Monday morning. My editor Ted James gave me…actually, let me back up and start at the beginning. Okay, here it goes. On a whim, I stopped and picked up coffee and donuts on my way into theLeftAhead office. Normally, Mr. James barely notices when food is brought into the office but today, for some reason, when I arrived and set everything down on the unusually messy conference room table, he thanked me profusely while grabbing a chocolate eclair and a large coffee. Weird, right? But that’s not even the amazing part. After that, he proceeded to inform me that he’s up against his deadline for the first Black & Silver post for this year’s San Antonio Spurs playoff run and he needs my help. I thought to myself, “WHAT?!?!?!?!?! He needs MY help?” Before I could finish enjoying this unprecedented moment in my head, he proceeded to inform me that he needed my undivided attention on helping him edit and proof his column before lunch because he was going to be tied up in meetings all afternoon and evening before Game 2 of the San Antonio Spurs First Round Playoff series with the defending-champion Golden State Warriors tips tonight at 8:30 pm MDT. You see, Friends 20/20 Nation, Mr. James has a hard and fast rule that his Black & Silver Spurs playoff post for the previous game must be published before tip off for the next game. He has been blogging the Spurs playoff runs since 2013, and not once has he violated this rule. Anyway, I’m burying the lead. I haven’t even gotten to the good part yet. After hearing the desperation in his voice, I thought, “I’m a team player, I suppose I can help my boss out today but then again, it is Monday and I also have to consider the needs of my Friends 20/20 audience. After all, I have a deadline today too. On second thought, I can have some fun with this.” Now with malice on the mind, I politely informed Mr. James that I would love to help him out but I can’t because I have Friends S4:E20 to write and I know how much he hates it when I mail in my column. Okay, you ready for the amazing part? Here it goes…FOR THE FIRST TIME IN FRIENDS 20/20 HISTORY, TED JAMES GAVE ME PERMISSION TO MAIL IN MY POST. Can you believe it? I know the San Antonio Spurs have had a weird season but even I didn’t know it was this weird. After picking my chin up off of the floor, I followed up by asking, “Are you sure you want me to mail in the Friends post?” He responded, “Yes, I really, really need your help today. You have my permission to mail in the post. After you’re done helping me and One Saṃsāra is published, just make sure you identify the most important takeaway from today’s Friends episode, highlight it quickly, and mail that sucker in.” Ladies and gentleman, hell has frozen over. Also, I’m no fool. I’m going to take advantage of this opportunity. It’s currently 11:50 am and Mr. James’ Spurs post has been published and he’s left the office for his afternoon meetings (taking two more donuts with him by the way). Here it goes…after scaring of Joshua, Rachel admits to Monica and Phoebe that she’s struggling with the fact that Ross is getting married to Emily. She reveals that she always assumed that because her and Ross had been on-again, off-again in the past, she always assumed that someday they’d be back on-again. And that, girls and boys, foreshadows some major drama to come as we wind down Season Four. Boom. Important takeaway highlighted. It appears that this authorized MAIL-IN SPECIAL is complete. I’m going to blow the afternoon off and go hit some balls at Topgolf. See you next week.

Recap in the Key of Phoebe – This is the one where Ross checks to make sure Rachel is okay after hearing about his engagement to Emily, Rachel demonstrates she clearly isn’t okay when she proposes to Joshua after three dates, Chandler gets annoyed with Joey’s snoring and demands he visit a sleep clinic, Joey gets a mouthpiece to stop him from snoring and decides to wear it even when he’s not sleeping because it tastes good, Monica picks up Emily’s wedding dress and starts wearing it obsessively, Phoebe joins the fun and starts wearing a wedding dress too, Rachel also joins the fun of wearing a wedding dress and reveals to Monica and Phoebe that she still sees her and Ross as on-again, off-again.

Chan Man Quip of the Week – [The Setup] Monica and Phoebe are hanging out at Central Perk when Chandler arrives. Chandler says, “Hello! Little ones.” Monica and Phoebe both say “hey” and then Monica asks, “So, is Joey gonna stop snoring?” Chandler enthusiastically answers, “Yep! And! A beautiful woman agreed to go out with me.” Monica and Phoebe look shocked but undeterred, Chandler continues, “Joey wanted to ask her out, but uh, she picked me.” Confused, Phoebe asks, “Oh, how’d that happen?” Chandler answers, “Because I’m cooler.” Not buying it, Monica requests, “No, seriously.” Chandler defiantly begins explaining, “Well she’s, she’s the kinda girl…” and then gives up. [The Knockout] Defeated, he admits, “Joey was unconscious.”