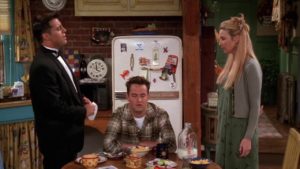 Friends S5:E4 – Hey there. Fancy seeing you here. How goes it, Friendsters? Good to be with you once again on this incogitable Monday afternoon. (That’s right, I went with incogitable.) We have a fine post for you today. Maybe one of our finest posts ever. (The Conan O’Brien tribute that you just participated in was proudly [but unfortunately] brought to you by the abandonment of the hour-long format on Conan ?.) For starters, today’s episode features a disagreement between Phoebe and Joey and, if you haven’t been previously made aware, a Phoebe v. Joey argument is about as hilarious as beef between two of the main characters can get (Chandler v. Ross and Monica v. Rachel also come to mind). Speaking specifically to the Phoebe v. Joey face-off in today’s episode, I think we all know who’s to blame. Thanks a lot, PBS. Because of the trauma you inflicted on poor little grieving-the-death-of-her-mom Phoebe, we all have to bare witness to Joey insisting there is no such thing as a selfless good dead and Phoebe setting out to prove him wrong. On second though, thank you, PBS, for your negligence and abuse of childhood Phoebe. Her quest in pursuit of a selfless good dead is hilarious and quite a treat for us, the viewers. The second reason why we have a fine post today and maybe our finest post ever is because we have a piping hot, delicious age-continuity Gandalf Gaffe to feast upon later in the post. As many of you know, there are few things I find more appetizing than a well-seasoned, mouth-watering age continuity Double G. You can bet your bottom dollar that I’m looking forward to that section of the post. Speaking of appetizing, I part ways with you today by moving right into the third and final reason why we have a fine post today and maybe our finest ever. If you know Friends 20/20 (and I think you do), you’re probably already guessed the last juicy thing that makes this post fine. That’s right, we also have a juicy FRIENDS pop culture reference to discuss this week. Can’t think of what it is? Let me point you towards another one of the most famous comedy shows to air on the very same network as FRIENDS. That network? NBC. The other famous comedy show? Saturday Night Live. That’s right, you got it now. The juiciness I speak of is none other than the FRIENDS reference Seth Meyers pop cultured on the SNL stage during his monologue Saturday night. You will find the video embedded below. And that, boys and girls, is what you call a Fine Post Trifecta. You’re welcome. I’ll be there for you again next week. Until then.

Recap in the Key of Phoebe – This is the one where Phoebe challenges Joey’s motives for taking part in a PBS telethon, Joey (in turn) challenges Phoebe’s motives for having her brother’s triplets, Ross has to decide between cutting Rachel out of his life in order to stay married or keeping Rachel in his life and having to get divorced, Rachel catches Monica in a compromising seductive position in her room, Monica makes up a secret new boyfriend from work to explain away Rachel’s embarrassing discovery, Chandler starts behaving obnoxiously when he finds out that Monica told Rachel her secret new boyfriend is the best sex she’s ever had, and, when Phoebe feels good that her PBS contribution allowed Joey to get on television at the telethon, she is forced to concede once and for all that there is no such thing as a selfless good dead.

Gandalf Gaffes – G…G…Grab your mittens, girls and boys because it’s cold outside and we have a doozy of a Double G to discuss today. As we have already started discovering previously in this section of the blog series, dealing with the FRIENDS character’s ages and birthdays is one of the biggest continuity issues our dear writer’s room consistently liked to serve up for us on the Gandalf Gaffe buffet. And, as we are coming to find out, Ross Geller’s age and birthday is the most problematic of all six of our major characters. Today’s gaffe continues to argue that case. While lamenting the choice that Emily has presented him (he stops seeing Rachel and she moves to New York or he doesn’t stop seeing Rachel and they get divorced), Ross complains to Monica, Phoebe, and Chandler, “Well, I don’t know what else to do. I mean, I either keep my wife and lose one of my-my-my best friends or I keep my friend and get divorced the second time before I’m 30.” Wow, I’m not a scientist like Dr. Geller, but I’m pretty sure that the rules of the space-time continuum that apply to the rest of us also apply to Ross. I’m guessing that this event taking place before Ross turns 30 is a little…I don’t no…IMPOSSIBLE. You see there is a funny thing called facts and one of them is that Ross established his age in The Pilot aka S1:E1 aka Grab a Spoon aka the very first episode of the show by complaining to Joey and Chandler, “I’m divorced! I’m only 26 and I’m divorced!” So, despite Ross’ age being established essentially from the jump, somehow, more than five years later, he still has not reached the age of 30? This is so not possible and I’m about to demonstrate why. In Friends S4:E5 aka I’m Gonna Head, Ross establishes his birthday month when he says in response to Gunther informing Rachel he’s creating a list of people’s birthdays, “Mine’s December…” This means that two months after The Pilot, Ross turned from 26 to 27 years old which, referring back to that space-time continuum thingy, in turn means that in December 1997 Ross turned (ding ding ding ding ding…you guessed it) the big 3-0. Since today’s episode takes place sometime between May 1998 and October 1998 (it’s not exactly clear how many weeks after Ross’s May 1997 wedding in London our story has advanced), there is no possible way that Ross could be complaining about a second divorce before the age of 30. Am I right? Or am I right? Or am I right? Since you all know how much age and birthday continuity issues really tend to stick in my craw, I’m ruling this a level three infraction.

Gandalf Gaffe #21: While seeking advise from Monica, Phoebe, and Chandler on his impending decision to stop seeing Rachel and stay married or keep seeing Rachel and get divorced, Ross complains about the prospect of being twice-divorced before the age of 30. Sorry, not possible, try again. S1:E1 establishes Ross’s age as 26 and S4:E5 establishes his birthday month as December so the point in the series that Ross turned 30 was December 1997 which is clearly prior to the Emily marriage situation as it is playing out in 1998.

Chan Man Quip of the Week – [The Setup] Phoebe, Monica, Ross, and Chandler are at Monica and Rachel’s apartment eating breakfast when Joey enters wearing a tuxedo. He greets everyone saying, “Hey!” Noticing what Joey is wearing, Chandler freaks out declaring, “Oh no-no-no-no-no-no, vomit tux! No-no, vomit tux!” Joey responds, “Don’t worry, I had it dry-cleaned.” Monica begins to inquire and then thinks better of it, asking, “Vomit tux? Who vomited on—y’know what, what you up to Joe?” Joey answers excitedly, “Well, I’m doing this telethon thing on TV and my agent got me a job as co-host!” Monica reacts, “Oh that’s great!” Joey continues, “A little uh, good deed for PBS and a little TV exposure, now that’s the kind of math Joey likes to do!” Raining on his parade, Phoebe chimes in, “Ugh, PBS!” Curious, Monica asks, “What’s wrong with PBS?” Annoyed, Phoebe responds, “Ugh, what’s right with them?” Dutifully following up on Monica’s original questions, Joey asks her, “Why don’t you like PBS, Pheebs?” Finally compelled to give the real answer, Phoebe replies, ” Okay, ’cause right after my mom killed herself, I was just in this really bad place, y’know personally. So, I just thought that it’d make me feel better if I wrote to Sesame Street, ’cause they were so nice when I was a little kid! No one ever wrote back.” [The Knockout] Like Batman breaking through the glass ceiling and parachuting down to confront the Joker, Chandler from out-of-nowhere defends PBS, arguing, ” Well y’know a lot of those Muppets don’t have thumbs.”