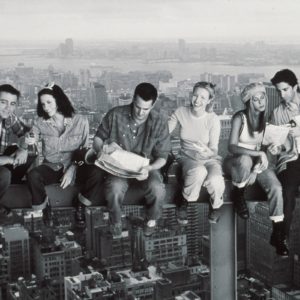 Friends S6:E1 – Yo!!! What is up, Friends Nation? Can you believe it? We’re finally back together once again to embark on our sixth trip around the sun together. I’m feeling relaxed and refreshed from yet another summer break spent on the beaches of my infamous, secret “undisclosed location” tropical island. Having literally just returned home from said location yesterday, I was pleasantly surprised to arrive back at theLeftAhead offices this morning only to discover that my boss, Ted James, is currently on sabbatical while he’s working on recording some new music. I was less pleasantly surprised to discover that he had left a note on my desk that said, “No slacking off while I’m gone, Adams.” The note was accompanied by this photo. Personally, I thought the photo was a little bit uncalled for. I mean, as loyal readers you all know that in five years, I’ve never once been late in meeting a deadline for a Friends 20/20 blog post ? so what’s with the passive-aggressive “welcome back” message? Well, whatever. I’m in a good mood today and I’m not going to let anyone (not even the guy who signs my paychecks) bring me down. After all, when I finish this post today, we will officially be more than halfway through the ten seasons of or impossible journey together. Even better, when you break things down into individual blog posts, after today, we’ll have 118 blog posts in our rearview mirror and only 109 blog posts out on the open road ahead of us. So, yeah, I’m in a good mood today and ain’t nobody gonna rain on my parade. But enough about me, let’s get this FRIENDS: Season 6 party started.

Not only does today mark our first step on the second half of our journey, but yesterday was also the 25th freaking anniversary of FRIENDS. That’s right, kiddos, the pilot episode of the GOAT sitcom first aired on September 22nd, 1994. In other words, FRIENDS is now officially old enough to run for Congress. As you might have guessed, because of FRIEND’s 25th anniversary, there has been a flurry of pop culture coverage and even a few television specials commemorating the anniversary. There’s been so much coverage, in fact, it would be impossible to catalogue it all in an effort to keep with our usual practice of highlighting instances of current pop culture coverage of FRIENDS. Having said that, I do want to make a note of one 25th anniversary commemoration that looks particularly exciting. As part of the 25th anniversary hoopla, Fathom Events is putting Monica, Rachel, Phoebe, Joey, Ross, and Chandler on the big screen with Friends 25th: The One with the Anniversary. That’s right, class. Starting tonight and continuing on Saturday, September 28th as well as Wednesday, October 2nd, FRIENDS will freaking be in theaters! Each night will show four episodes and will include some never-before-seen behind the scenes footage. Want a rundown of which episodes you can check out? Well, Friendsters, you’ve come to the right place. Tonight, you can grab a ticket to see The One Where Monica Gets a Roommate, The One with the Blackout, The One With The Birth, The One Where Ross Finds Out. On Saturday, your lineup includes The One With the Prom Video, The One Where No One’s Ready, The One The Morning After, The One With The Embryos. And finally, next Wednesday you can check out The One With Chandler In A Box, The One With Ross’s Wedding Part 2, The One Where Everyone Finds Out, The One Where Ross Got High. Unfortunately, already scheduled obligations are going to prevent me from attending this awesome FRIENDS event either tonight or on Saturday, but you can bet your bottom dollar that I’m going to do everything in my power to take part in the last and final night of the event next Wednesday. Now that I’ve sufficiently plugged FRIENDS on the big screen, let move right into today’s episode.

Season Six picks up exactly where Season Five’s cliff hanger left off: an utterly hammered Ross and Rachel running out of a Las Vegas chapel immediately after tying the knot. After the newly weds have vacated the chapel, Phoebe and Joey come storming in to commiserate with Chandler and Monica (who conveniently hide the fact that they were also there to get married by pretending that they were also there for the same reason that Joey and Phoebe were: Ross invited them to watch). The next morning, Ross and Rachel wake up in bed together hung over. While they are worried about whether or not they slept together, neither has a recollection of getting married and it takes the rest of the gang questioning them about it at brunch later for the memory to come back. Of course, hilarity ensues has Rachel and particularly Ross (coming to grips with the possibly of a third failed marriage) figure out how to navigate what Rachel calls, “the world’s worst hangover.” Meanwhile, Monica and Chandler (both having second thoughts about rushing into marriage) get back to New York with their girlfriend-boyfriend relationship in tact but, even though they are both relieved to not be tying the knot, Chandler ups the ante when he asks to move in with Monica. A smitten Monica agrees. Finally, Joey ruins his Frenaissance with Phoebe by sleeping for extended periods of time during the car ride home from Vegas back to New York with Phoebe in her grandmother’s cab. When Phoebe forces Joey to drive, he picks up a hitchhiker while Phoebe is asleep and then gets in the backseat with her to sleep some more while he lets the hitchhiker drive. When Phoebe wakes up, she is angry with Joey but quickly realizes that the hitchhiker is harmless. She then decides to play car games with the hitchhiker while shutting Joey (who’s still in the backseat) out of the conversation by closing the cab’s divider. Classic Phoebe. Alright, y’all. With that extensive breakdown, my boss can’t accuse me of slacking off today. Season Six is going to be a doozie. Buckle up. I’ll see you next week.

Recap in the Key of Phoebe – This is the one where Ross and Rachel wake up in bed together so hungover from their night out in Vegas that they don’t remember that they got married, Chandler and Monica keep receiving signs that they should get married even though neither one of them is ready, Joey convinces Phoebe to drive back to New York from Vegas with him and then Phoebe gets mad when Joey sleeps the entire time she is driving, Chandler proposes moving in together as an alternative to getting married and Monica enthusiastically agrees, Ross tries to convince Rachel to stay married because he doesn’t want to become Three Divorce Guy, Rachel refuses and demands that Ross get them an annulment, and Ross admits to Phoebe that he lied to Rachel about the annulment and that (unbeknownst to Rachel) they are still married after Phoebe and Joey gets back to New York from their Frenaissance.
​
Gandalf Gaffes – None. Flawless episode!

Chan Man Quip of the Week – [The Setup] Ross and Rachel have just arrived to join the rest of the gang at the breakfast buffet in Vegas. The newlyweds seem oblivious to the fact that everyone else is staring at them. Finally, after pouring some coffee, Ross notices and asks, “What?” In response, Chandler asks, “Are we gonna talk about what you guys did last night? Or…” Confused, Rachel looks over at Ross and says, “I don’t know.” She then turns to everyone else and timidly says, “What do you mean last night? Nothing, nothing uh, happened last night.” Ross backs Rachel up with, “Yeah.” Phoebe counters with, “Uh-huh! Ross invited us all to watch.” Assuming that Phoebe is suggesting that Ross invited them all to watch her and Ross in bed, Rachel turns to Ross stunned and gives him an angry glare. Monica interjects with, “Rach! We weren’t gonna miss our friends getting married!” Rachel gasps and Ross also looks shocked as Rachel asks, “Who got married?!” Realizing that Ross and Rachel are probably experiencing memory loss from last night’s drunken bender, Chandler gently answers, “You did.” Ross fires off a reactionary and defensive response, claiming “What?! Hello! We didn’t get married.” Piling on, Rachel joins in with “No, we didn’t get married! That’s ridiculous!” After the initial reaction dusts settles, Ross and Rachel turn to look at each other and after a moment, both gasp as they start remembering in unison. Ross admits, “We-we-we—I remember being in a chapel.” Also gaining clarity, Rachel cries out, “Oh my God.” Continuing to struggle between denial and acceptance, Ross declares, “I—They would not let us get married when we were that drunk!” Rachel agrees, “No!” Ironically, the voice of reason, Joey counters, “They let you get married when you’re drunk! Most people who get married in Vegas are drunk!” Offering hilarious TMI, Phoebe says, “Hell, I’m drunk right now!” After everyone turns to look at her, she defensively continues, “What? I can’t have a mimosa with breakfast?! I’m on vacation!” Redirecting the conversation back to Ross and Rachel, Monica asks, “What are you guys gonna do?” Looking at Ross, Rachel answers, “Well, I guess we just find a divorce lawyer?” [The Knockout] Unable to resist the opportunity to level a friend with his already loaded quip canon, Chandler fires off, “Well, I think, I think, Ross already has one. Now, this one’s free, right? Because you paid for the first two, so the third one’s free.”
​
#TheChickAndTheDuck