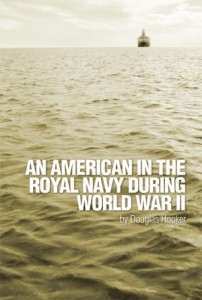 Fifty-six years after World War II ended, the wartime story of a Southwestern University professor is finally being published.

Douglas Hooker served as a psychology professor at Southwestern from 1961 to 2004.

Among his former students was Jake B. Schrum, who is now president of Southwestern. Before Hooker died in 2006, Schrum encouraged him to share his life’s story, which included two years of service on a British destroyer in World War II. The result is a 117-page book titled An American in the Royal Navy During World War II.

Hooker was born in Michigan in 1925 to British parents who had immigrated to the United States. The family moved to England when he was five. Hooker enlisted in the Royal Navy on June 14, 1943, after having worked at a clerical job at the Admiralty.

On Oct. 27, 1943, Hooker joined the crew of a new destroyer called the HMS Virago. That December, the Virago joined a group of ships sailing toward the Arctic to protect convoys carrying war materials and supplies for the Soviet Union. This service was cold, dangerous, and only a few convoys got through to Murmansk without losing some ships to German submarines. On one of its voyages during this period, the Virago participated in the sinking of the German battleship Scharnhorst.

Later Hooker’s destroyer participated in the D-Day invasion of France. After completing its role in the invasion, it steamed through the Mediterranean Sea and the Suez Canal to participate in the final naval actions of the war in the Indian Ocean to defeat Japan. The Virago sailed 91,240 nautical miles during the two years Hooker served on it. Only one other ship in the Royal Navy saw more action during the last two years of World War II.

After being discharged from the Royal Navy in 1946, Hooker came to stay with relatives in the United States and attended Wofford College with the help of the GI Bill. He later earned a master’s degree in clinical psychology from Wayne State University and a Ph.D. in educational psychology from The University of Texas at Austin. His experience at Wofford convinced him that he wanted a career teaching at a small liberal arts college, and he joined the Southwestern faculty after a brief stint at East Texas State University (now Texas A&M University-Commerce). Hooker was very popular with the students at Southwestern and is credited with starting the Psychology Department’s internship program in 1966. He received the William Carrington Finch Award in 1996 and was honored by the alumni association as “Mr. Homecoming” in 1982.

At Homecoming in 1996, Southwestern announced the creation of the William Douglas Hooker Scholarship Fund. The fund was designed to provide financial assistance to psychology majors who want to enroll in internships the summer after their junior year. Two students a year are selected to receive the scholarship. “Psychology internships are rarely, if ever, paid, so this scholarship makes a big difference in making internships affordable,” said Jacqueline Muir-Broaddus, chair of the Psychology Department.

Hooker worked on the book during two sabbaticals, the first of which was spent in England doing research. Although he loved to write, Hooker never used computers. The book was written entirely by hand and typed by former faculty secretary Kathy Buchhorn.

Because Hooker died before he had a chance to edit and proof the manuscript for printing, William B. Jones, Hooker’s friend and a retired member of the History Department, participated in the final editing and proofing.

“Many of us who experienced one of his courses were truly transformed by the way he taught and the way he engaged his students,” President Schrum wrote in an introduction to the book. “This book will allow others to learn the life lessons that those of us who knew Doug were privileged to learn during his lifetime.”

AN AMERICAN IN THE ROYAL NAVY DURING WORLD WAR II