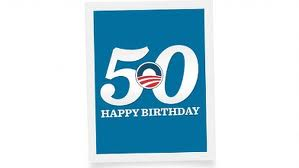 Happy 50th Birthday! I am on this journey because I am still fighting for change and I know that despite all of the unbelievable challenges we face, you are the right leader to inspire the American people to achieve it. I remember the first time that I heard of you. I was in Chicago training to organize in Detroit for the 2004 election in a Democratic Campaign Management program run by Bob Creamer. Incidentally, I met my wife, Jenn, during this training and I remember us talking enthusiastically after we were told about an exciting candidate named Barack Obama. Rep. Jan Schakowsky told a funny story about when she had worn your Senate campaign button in a meeting with President Bush and that he kept looking at it, until she told him “Obama not Osama.” Over the coming months, we became very interested in your Senatorial campaign and we were so inspired by your 2004 speech at the convention. After that speech, we knew that you should become President.

I returned to Texas, after the 2004 election, and I read your book, “Dreams from My Father.” I was so touched by your writing that I wanted to share it with my own father. My dad was a World War II veteran and had been a professor of humanistic psychology for 43 years. He was in the early stages of Alzheimer’s disease when I gave him your book. At the time he was working to complete the manuscript on his own book about his experiences in World War II and he had asked me to help him with editing it. It was a special time for me and sharing your book with my dad while helping him with his book is something I will always cherish. I remember him talking about how impressed he was by you and how he thoroughly enjoyed your book. His disease progressed rapidly and “Dreams from My Father” ultimately was the last book that he ever finished reading. Your commitment to expanding federal funding for stem-cell research is a reason that I’m on this journey.

Since returning to Texas, I have been working in the labor movement. At a book signing tour event for “The Audacity of Hope” in Austin, my mom told you that I am a union organizer and that I would work on your campaign if you decided to run for President. She tells me that your ears perked up when she shared that her son was an organizer and I’m happy to have kept her word by working on your presidential campaign. In fact, not only did Jenn and I volunteer for your campaign here in Texas, my mom, who is a lifelong educator, was so inspired by your candidacy that she actually used her vacation time to fly up to New Hampshire and volunteer for you during the primary. We worked tirelessly to help get you elected and we were proud to have been early supporters who had been a part of the movement from its inception. As elated as we were when you were elected, we have continued to fight for change and have been extremely disappointed that for many people, the movement was only about getting you elected. So many supporters disengaged from the fight believing the work was done when you were sworn in. I’m on this journey because I believe in engaging in the consistent and unyielding movement for change.

As a public sector union organizer, I see the real struggles of the American working class on a daily basis. I speak to countless workers who are struggling to make it month to month with stagnant wages and continuous benefit cuts. Furthermore, massive layoffs and cuts to government services are hurting most citizens. We need a substantial jobs program, we need to invest in infrastructure, and we need to end tax breaks for millionaires, billionaires, and corporations. But more than anything, we need a vocally pro-union president. I am fundamentally convinced that the single most important thing that we can do to rebuild the American middle class is to strengthen the labor movement. I know that you are in support of the Employee Free Choice Act and that is another reason why I am on this journey. I urge you to speak out forcefully against the demonization of unions and do whatever it takes to educate the public about the necessity of the Employee Free Choice Act so that you can eventually sign it into law. If we can create a level playing field, we can begin the rebuild the middle class by giving workers back their right to organize and to collectively bargain.

Finally, Mr. President, I am on this journey to achieve the same opportunity at the American dream for my generation and my children’s generation that previous generations have had before us. My wife and I bought our first home in 2008, three months before the market collapsed in the great recession. We are current on our mortgage, but we are so far underwater on our home value that we feel trapped. My wife was laid off from her job at the end of 2009 and has gone back to school to get her master’s degree. We are elated that she is furthering her education but are nervous about how much better the job market will be when she graduates. We, like many of the workers that I organize, are struggling to make it right now. I know that the obstacles that you face in enacting meaningful change for middle and working class families are numerous and complex. I know that the forces invested in defeating your agenda are mobilized and extremely entrenched and powerful. I also know that the American people are on your side. My advice is that you get back to inspiring the American people about the change that is possible. Mobilize your supporters to reengage in the fight through your vision for recovery. Now that the debt limit crisis is over, forget about compromising with the other side on ideas that will not work and mobilize the American people behind the ideas that will. I am on this journey, Mr. President, because no matter how tired we are and no matter how long we have been fighting, we have always only just begun the hard work of enacting change. I am fired up and ready to go. So Happy Birthday President Obama, may your 50th year be your best one yet.

Subscribe to this author's posts feed via RSS
In category: Politics
Tags:Barack Obama