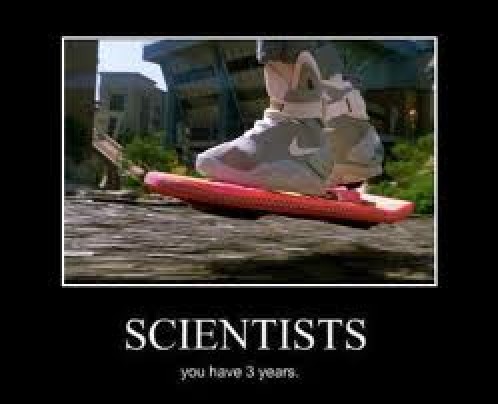 If recent announcements coming out of camp Google are any indication, they have a scientist on the case to make the invention of hover boarding portrayed in the Back to the Future Trilogy

‘s fictional 2015 a reality in the next three years. I’m being facetious but in the last two weeks, Google has released a couple of videos on its YouTube channel that have really caught my attention. The first was released on March 27th. It is a video displaying an early user of Google’s infamous self-driving car technology. The “passenger” sitting in the driver’s seat during the presentation is Steve Mahan, who is visually impaired. It shows the Google powered car taking him from his home, through a fast food drive through, to his dry cleaners, and then safely back home. While I had known about Google’s self-driving car project for quite some time, this video piqued my interest because it moved the idea of a self-driving car from imaginable to tangible. I really enjoyed the glimpse into a future where computer technology and transportation come together in a rather meaningful way.

Sure, the innovations in hybrid and electric engines that are rapidly moving into the market are a step forward in the transportation sector, but the self-driving car is a game changer. As I watch the joy on Steve Mahan’s face during this video, I’m inspired thinking about the impact that this would have on persons with disabilities and the elderly. They would experience a transformation of independence and self-reliance by having a self-driving car. I’ve seen, within my own family, the strenuous journey that a family endures while coping with the effects of disease and aging. I know, helping my loved ones, that the realization that you no longer have the independence to drive a car on your own is one of the most difficult points in a already painstaking process. The self-driving car radically shifts the relationship between transportation and independence for our most vulnerable citizens. Should Google be the first company to bring a technology to market that would restore so much hope and dignity, I will applaud the company’s commitment to advancing a better future.

One prevailing question, however, is whether Google will indeed win the race to bring the self-driving car to market? Another is whether or not Google genuinely has a commitment to advancing a better future? I consider myself a technology enthusiast, but tech is far from my discipline of expertise. I do enjoy contemplating the endless possibilities of technological impact on the future, so I often find myself reading tech news and blogs. A recurring criticism I have read about Google is that they are too overextended, meaning they have their hand in anything and everything tech related. The question seems to be whether Google is committed to excelling at any of their current ventures or if instead they are determined to be adequate at everything in hopes to eventually dominate everything. I recently finished reading Steve Jobs

by Walter Isaacson and I specifically remember the advice that Steve Jobs gave to Google CEO Larry Page, “Figure out what Google wants to be when it grows up. It’s now all over the map.” Jobs advised that Page decide “what are the five products you want to focus on? Get rid of the rest, because they’re dragging you down. They’re turning you into Microsoft. They’re causing you to to turn out products that are adequate but not great.”

Google obviously has their hand in quite a few ventures. This is evident just by going to the Google search page and clicking on More and then scrolling down to Even more and opening the page displaying all of their products. Google seems to be competing on so many different tech fronts it is puzzling to see what their long-term strategy is unless that strategy is using adequacy on multiple fronts in hopes of future domination of the technological marketplace. And if their strategy is domination of the marketplace, are they remaining consistent with their corporate motto, Don’t Be Evil? From the likes of it, Google knows what it wants to be when it grows up. The company seems well on its way to aspiring to become the real life incarnation of the fictional Skynet from The Terminator

series. Ironically, if you google Is Google Skynet? this is hardly a unique observation.

This brings us to the second video released on Google’s YouTube channel that caught my attention. By the way, it is worth mentioning that Google bought and now owns YouTube, but I digress. The second video was released on April 4th and gives insight into Google’s Project Glass, which is a venture to bring augmented reality glasses to market.

While I am fascinated by the prospect of Google creating a technology that takes mobile computing out from the palm of our hands and conveniently places it in front of our eyes, I am also somewhat terrified about the inevitable next step. Computing has moved from our desks, to our laps, to our palms, to potentially in front of our eyes. The next step is to implant mobile computing technology directly into our bodies. When we arrive at this point, we will be rapidly approaching the technological singularity described in The Singularity Is Near

by Ray Kurzweil. The technological singularity is a theoretical point in the future when artificial intelligence surpasses human intelligence. I will not go into great detail about it in this post because I plan on devoting a blog post to that concept down the road, but one of the key predictions that Ray Kurzweil makes about the technological singularity is that human beings will begin to merge with our computer technology. Augmented reality glasses seem rather close to me to being one of the last technological steps before humans begin to merge with our computer technology. Call me crazy, but I don’t see a great many other places to take mobile computing after that except to say, “screw it, lets just implant it directly into our bodies.”

This begs the question, why is Google developing augmented reality glasses? Are they doing it for good or evil? Clearly the video demonstrates that these glasses are going to make Google+ and Google Maps super wicked cool. This brings us back to the theory that Google has their hands in being adequate at so many different technological ventures right now so they can dominate the marketplace in the future. Google’s announcements over the last couple weeks suggest that they are comfortable informing the public that they are heavily invested in the technologies of tomorrow. If one of the technologies of the future is integrating social media into augmented reality, then Google is investing in Google+ now so that they can edge out Facebook and Twitter down the road. This strategy makes sense if the motivation is technological domination. From the looks of it, Google is not only competing with Apple, Microsoft, Facebook, and Twitter, but also Ray-Ban, Oakley, Ford, and General Motors. But why compete with everyone on every aspect of technology when your company motto is Don’t Be Evil? The visuals generated by the Google Project Glass glasses are awfully similar to the visuals generated by the artificial computer eyes of Skynet’s terminator android. And Google’s mobile operating system is called Android. I’m just saying.

There is a lot to be excited as well as a lot to be cautious about technology’s impact on the future of the human race. My mind was racing for weeks after reading The Singularity Is Near

. So much so, that I had to completely detach myself from thinking about technology for several months afterward. I don’t personally think that the heads of Google are concocting a sinister plot to achieve global domination which could put the survival of the human race at risk. I do believe they are competing at an alarmingly fast and exponentially increasing pace to be the most valuable company on the planet. There is inherently an exponentially increasing risk associated with putting the speed at which technology is developing under the market pressure of needing to be the first one to develop it in order to succeed. I believe it is important for not only Google, but all technology companies to balance the pressures of competing with the commitment to create technology that helps make people’s lives better, richer, and fuller. Not just easier, funner, and faster. Perfecting a self-driving car that helps persons with disabilities and the elderly achieve a greater sense of independence is an example of creating a better future through technology. Perfecting augmented reality glasses that will literally keep the teenagers of tomorrow connected to their televisions, Facebook accounts, mobile phones, and mp3 players twenty four hours a day perhaps is not. Come on Google, don’t be evil. And oh yeah, how long until I can get a pair of those glasses?