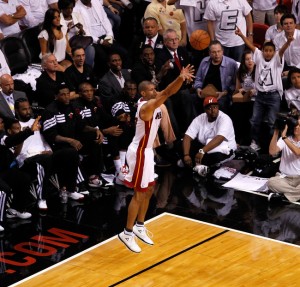 All of the Lights – Shane Battier put a three up from 25 feet out with 18 seconds left in the game (5 seconds left on the shot clock) and with the Miami Heat ahead of the San Antonio Spurs by 18 points. Battier would probably say, if asked, that his motivation was simply to try to put up one more attempt to see if he could get himself out of a terrible shooting slump. But deep down, being of Duke pedigree, he probably knows that it was ill advised because fans of the opponent could perceive it as an attempt to run up the score and deem it bad sportsmanship. Further eroding the soundness of the decision to put the three up, Battier has inadvertently given Tim, Tony, and Manu a tiny little present to store away in their vast reservoirs that normal human beings call memory banks. And even though these reservoirs overflow with countless disrespectfully premature celebrations by would be conquering rivals, they always seem to have room for one more juicy nugget. The proper play for Battier in that situation, the one that Mike Krzyzewski surely taught his Blue Devils, would have been to hold the ball for the remaining 5 seconds and then hoist a halfhearted attempt as the shot clock expired. Another acceptable option, and the classy choice I would have expected out of a former Dukee, would have been to simply hold the ball and then hand it to the referee after taking the 24 second violation so that San Antonio could run out the remainder of the game clock. There must be something in the water down there on South Beach because Shane Battier is one of the last players that I would have guessed would try to embarrass an opponent by running up the score. That’s okay, the San Antonio Spurs always take these sorts of matters in stride. More often than not, San Antonio is able to draw back upon these seemingly benign little slights and use them as a little extra shot of fuel to help us persevere and ensure that in the end we are the last ones laughing. The difference is, we do our laughing behind closed doors. If you believe in basketball karma, which I do, then you could argue that Battier has tempted the basketball gods to frown down ever so slightly every time a Miami three point attempt is in the air at the AT&T Center over the coming week. Furthermore, if you put stock in the law of averages (which I also do) and observe the entire series as a singular statistical sample (i.e. the number of threes Miami can make in the series is finite), then you could argue that Battier has wasted a precious made three point basket on tomfoolery in a blow out victory that Miami might come to desperately need later in the series if it remains close. Win by 19 or win by 4, Miami and San Antonio are now tied at one victory a piece after the Heat averted disaster by defeating the Spurs last night 103-91 in their gym. Nonetheless, the two teams are now heading to Texas after San Antonio has already done enough in Florida to earn an opportunity to show that we are better at protecting our home court than the defending champions. If the #BlackAndSilver are successful, then that disrespectful “turd sandwich” of a three pointer that Shane Battier launched in garbage time of Game 2 will be the last Heat points at American Airlines Arena this season.

The Spurs will have to play 144 minutes of focused and determined basketball at home in order to accomplish the arduous task of preventing Gloria Estefan, Rick Ross, Flo Rida, Justin Bieber, David Beckham, and Jimmy Buffett from having plans for a week from tomorrow on South Beach. I mentioned in Thirteen Down that the only way that the Heat will win this series comfortably is if the Spurs commit the cardinal sin of repeatedly turning the ball over, especially in ways that ignite the Miami fast break. The Miami break is too dangerous of a weapon to tempt into action not only because LeBron James and company finish like maniacs at the rim but also because the confidence level of every single player on that squad, one through thirteen, is transformed by the team getting a couple of easy, highlight worthy baskets in transition. Miami’s pedestrian role players are transformed into sharp shooting savants and Wade and James get an extra spring in their step when a moment of swarming defensive pressure ignites the most devastating up-tempo offense in the league. It was clearly evident last night that once those flood gates were opened, there was no shutting them off. The most frustrating part of Game 2 was that those proverbial flood gates were so close to never opening in the first place. San Antonio was only down two with 3 minutes left in the third quarter of a grind-it-out, heavy weight slug fest which seemed like a replay of Game 1 when disaster struck. A nightmare that we had been waiting to haunt our small, humble community throughout the duration of this playoff run finally came seeping through the cracks in our living room window sills to spoil our dreams of watching the Spurs steal another close game on the road. That’s right, Joey Crawford swallowed his whistle at a pivotal moment to the detriment of the Spurs. Remember Joey Crawford? You guessed it, Joey (Expletive Deleted) Crawford has struck again. With a little under 3 minutes left in the third quarter and the Spurs down two, Manu Ginobili drove the ball to the basket, got raked across the arm, the ball popped loose, Joey Crawford (the closest official to the play) held his whistle, Miami stole the ball, LeBron spotted Mario Chalmers in the left corner in transition, Chalmers kicked to a wide open Ray Allen for an elbow three. Bucket, 5 point swing, Miami is off to the races, ball game. In fairness, the Spurs had been undefeated this postseason with Joey Crawford working the game but part of me wonders if the reason for that is that he had just been patiently biding his time so he would have an opportunity to stick his finger in our eyes during the NBA Finals. Of course, I know it is unreasonable to argue that one blown call towards the end of the third quarter cost a team a ball game that they lost by 19. But then again, if the foul call is made and Manu earns two free throws, he potentially reties the game. Miami is then forced to run a half court set on their next possession, the run never gets started, this never happens, and perhaps Tony Parker has an opportunity to work his fourth quarter magic once again. I concede that, based on the law of averages, the probability was such that Miami would have taken Game 2 even without their huge run. After all, Tim, Tony, and Manu were a combined 10 for 33 from the field and their Spurs committed 16 turnovers, four times as many as we did in Game 1. So hats off to the champs, they played an excellent ball game and deserved the victory. The player of the game was Danny Green which was a pleasant surprise. I assumed that in every road game during the NBA Finals that it would be either Duncan, Parker, or Ginobili that would earn this honor. Clearly, none of them were worthy last night but Danny was spectacular going 6-6 from the field (5-5 from downtown) for 17 points. Danny is now 9-14 from the arc in the series and if he can keep shooting lights out coming home to the AT&T Center, San Antonio will likely put ourselves in a position to return the favor and win at least one of the next three games in blow out fashion. Given the evenness of the match up, I anticipate that the other two home games will be gut wrenching contests of will and execution similar to Game 1. The Spurs will have to play our best basketball of the season over the course of the next week to have a chance at hoisting a trophy on our home court. Despite the fact that Miami has likely gained confidence from the decisiveness of last night’s victory, the Spurs won’t be rattled and we are capable of a resounding response. We have recovered from bigger beat downs than this to win the NBA championship. Even though the task at hand is unquestionably difficult, San Antonio is still in the drivers seat in this series. We went down to Florida and accomplished everything that was reasonably realistic, we forced the defending champions to relinquish home court advantage in the series. Now we must defend it with everything that we’ve got. It starts tomorrow night. The city must come together and cheer louder and harder than we did when we were in this position for the first time while our players execute more brilliantly on offense and lock down more aggressively on defense than we did in our most dominating championship run. Tomorrow night, we’ve gotta party like it’s 1999.