When the Laughter Stops 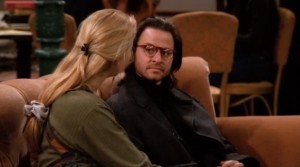 Friends S1:E13 – Happy MLK Day, engaged citizens of the internet! I know that all of us have chosen to occupy a large portion of our day doing something constructive to honor the legacy of Dr. Martin Luther King, Jr. However, even on a day of reflection, everyone needs to sprinkle in a little downtime, so thank you for choosing to spend a few minutes of yours with me. In the spirit of devoting most of our attention on this holiday to matters much more important than pop culture, I will keep this post short and to the point. In today’s episode, we begin with Chandler accidentally seeing Rachel naked which sets into motion a chain reaction of revenge peeping that, unfortunately for Monica, concludes with her getting to know Joey’s dad rather intimately. One of the major plot lines of the episode is centered around Joey discovering that his dad is having an affair, which (besides giving Monica nightmares) allows the audience to observe the dynamics at work within the Tribbiani family. This goes a long way in expanding our knowledge of Joey’s upbringing and family as we see him interacting with his parents in an attempt to make peace with his discovery. Add Phoebe’s eccentric new boyfriend (Roger the Shrink) into the equation and the writers have put together a fertile environment for hijinks and hilarity to win the day in this episode. So, if you’re following along at home, enjoy re-watching this Friends classic and have a fruitful remainder of your holiday. Oh, and since I was lucky enough to grab a few minutes of your attention, I’d be remiss if I didn’t leave you with a quote from the historic civil rights leader that we are spending today celebrating. To quote Dr. King, “Life’s most persistent and urgent question is, ‘What are you doing for others?'” It never hurts to keep that in the back of your mind as a little food for thought as you are navigating this beautiful planet that we are all so privileged to share. See you next week.

Recap in the Key of Phoebe – This is the one where Phoebe is smitten with her new boyfriend (Roger the Shrink), Ross gets jealous of Chandler when he discovers that Chandler accidentally saw Rachel naked by being in Monica and Rachel’s apartment uninvited just as Rachel was walking out of the bathroom after taking a shower, Joey discovers that his dad is having an affair, Rachel (trying to get back at Chandler) walks in on Joey naked in the shower who in turn walks in on Monica naked who in turn walks in on Joey’s dad naked, and Phoebe dumps Roger after she realizes that she “hates that guy” when the laughter stops.

Chan Man Quip of the Week – [The Setup] The gang is sitting around Monica and Rachel’s apartment talking about Joey’s dad’s affair when Rachel notices Chandler is staring at her chest. Bewildered, Rachel asks, “Why can’t you stop staring at my breasts?” Playing dumb, Chandler shoots back, “What? What?” Rachel responds sarcastically, “Did you not get a good enough look the other day?” Still unhappy with Chandler, Ross interjects, “Alright, alright. We’re all adults here, there’s only one way to resolve this. Since you saw her boobies, I think, uh, you’re gonna have to show her your peepee.” Chandler quickly attempts to nip that idea in the bud, “You know, I don’t see that happening.” Rachel, however, visibly excited agrees with Ross, “Come on, he’s right. Tit for tat.” [The Knockout] Chandler, having none of it, dismisses the notion with “Well I’m not showing you my ‘tat.'”