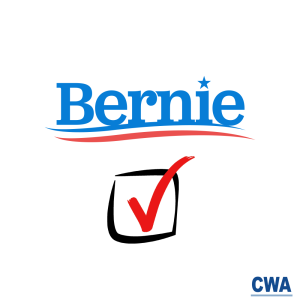 On Thursday, December 17th, my union, the Communications Workers of America, endorsed Bernie Sanders for President of the United States. As a public supporter of Bernie 2016, needless to say, I could not have been more thrilled with my union’s endorsement. In fact, ever since the endorsement was announced two weeks ago, I’ve been bursting with so much excitement about the political statement my union delivered by supporting Bernie that I’ve been needing to channel my enthusiasm (and the frantic energy associated with it) into action. To that end, and since writing is never a bad place to start, I’ve decided to use a few of the remaining hours of 2015 and the modest platform that this blog affords me to explain my reasoning for endorsing my union’s endorsement. First, I’m a strong proponent of (small d) democratic institutions. Therefore, while I am happy about the decision that my union came to, it is the process rather than the outcome that I am most excited about concerning our endorsement. This decision was made through a three month long democratic process in which 700,000 members were given an opportunity to voice our opinion on whether CWA should endorse a candidate in the primary and if so, who. I’m proud of the leadership of my union for enlisting the membership in a democratic process as the vehicle for making this decision.

Intuitively, you might imagine this to be an ordinary occurrence for a labor union. After all, the American labor movement is one of the loudest institutions in our society advocating for ordinary Americans to have a voice through collective action. Unfortunately, most labor unions operate in stark contrast to our ideals when it comes to political endorsements. The democratic process that CWA used for determining our endorsement is in fact extraordinary given that the leadership of many other prominent labor unions in America did not offer their membership a voice in their endorsement decisions and instead made unilateral, top down endorsements. Already this primary season, American Federations of Teachers (AFT), Service Employees International Union (SEIU), National Education Association (NEA), American Federation of State, County, and Municipal Employees (AFSCME), American Federation of Government Employees (AFGE), among others have all endorsed Hillary Clinton for President of the United States. Ladies and gentleman, with the exception of CWA, the umbrella of the AFL-CIO, and The Teamsters (who have yet to make an endorsement), this is a who’s who of the power players in the American labor movement. To the best of my knowledge, all of the unions who made the decision to endorse Hillary did so at the executive board level and none of them made the decision by allowing their memberships to choose democratically. So, given the enthusiasm for Bernie Sanders’ populist message among rank and file union members across this country, why have virtually all of the biggest national unions endorsed Hillary? Presumably, the executive boards of these unions are making the cold political calculation that Bernie Sanders can’t win the general election and coupling that calculation with the fact that it is absolutely imperative to the vitality of organized labor for a Democrat to retain the White House in 2016. In my opinion, if indeed this is the primary motivation for the love fest between organized labor and the Clinton campaign, it is incredibly short sighted to quell the grassroots enthusiasm of millions of rank and file union members across this country in order to make the safe bet.

As unions, are we or are we not in the business of mobilizing millions of ordinary American to stand up for progressive change? Are we or are we not on the frontline in the fight for social and economic justice in the United State of America? Taking the wind out of the sails of the enthusiasm that millions of rank and file union members have for Bernie Sanders’ message an entire year before America votes seems to me like a horrible blunder on the path to achieving our longterm goals as a movement. This is not to say that Hillary Clinton can’t also be a candidate for progressive change. It’s simply to say there is no disputing that, to date, Bernie Sanders has captured most of the populist energy and enthusiasm in the Democratic Party primary electorate and he has done it by advocating positions central to the values of the American labor movement. To not only fail to harness this populist energy in favor of pragmatism, but to also ignore it completely by making unilateral, top down endorsements of an establishment candidate, a great many of America’s great unions are serving as their own worst enemies and are also impeding the larger movement, in my opinion.

On Saturday, December 19th during the third Democratic Party debate held at St. Anselm College in Goffstown, NH, Bernie Sanders said, “CEOs of large multinationals may like Hillary, but they ain’t gonna like me. And Wall Street is gonna like me even less.” I’m very proud of my union and its membership for using this endorsement opportunity to put our money where our mouths are when it comes to fighting for social and economic justice. It is my estimation that there is little hope that our government will have the capability to address the systemic economic issues facing our country by electing an establishment democrat to succeed President Obama in the White House. The reason I say this is because I do not believe that an establishment candidate will have the ability to mobilize the millions upon millions of citizens whose undivided engagement in our government is required in order to fix systemic problems like wealth inequality, campaign finance, and global warming, to name a few. I believe that Hillary Clinton is a fine public servant and (unlike many of the candidates in the Republican field) she is qualified to hold the office that she seeks. I further believe that if elected, she would do a good job as commander-in-chief and would be an adequate steward of the American economy. Hillary Clinton is a vastly superior choice to be our next president than any candidate running for the GOP’s nomination. However, it was not necessary for many of the major players in the American labor movement to shoot themselves and the movement in the foot in order to demonstrate this point. Had these unions chosen to either make a democratic endorsement (like CWA) or simply waited to endorse Secretary Clinton until the general election if indeed she were able to secure the nomination, their thirst for pragmatism could have been quenched without squandering an opportunity to use the populist enthusiasm of Bernie Sanders supporters to build our movement. Should Hillary win the Democratic Party nomination, she will have my support and I will devote time and energy during the general election cycle to help ensure she gets elected. However, as much as I respect Secretary Clinton, I do not believe she is capable of mobilizing the millions upon millions of citizens necessary to take our democracy back from the rich and powerful interests who have hijacked it. It’s not too late for the labor movement to follow CWA’s lead and shift course. Each of the large national unions who endorsed Hillary Clinton early out of expediency could write a statement embracing Bernie Sander’s message and giving their rank and file members permission to devote time and energy to helping build the movement to restore democracy that is the Bernie Sanders campaign. We need a political revolution in this country. Bernie Sanders is the only candidate in the field who is trying to lead one. With the full-throated support of the labor movement, he just might.