WRITER’S NOTE: This piece was written in December of 2003 and presented to my dad as a birthday gift on January 3, 2004.

I have never lived in Detroit. I have never even been there on vacation.. I’m sure that within my lifetime I will more than likely take that vacation, hopefully for the first time with my dad. But should I never make the trip, that will be okay because I already know the place well. I’ve been there many times. I love it in Detroit. I consider it a home away from home.

Everything I have learned about Detroit is intoxicating. The industrial smell. The way the smog mixes with the cold northern air is refreshing. At least that’s the way I picture it in my head. Of course, smog is generally regarded as an offensive contributor to a place’s smell. But there is something different about the smog in Detroit. It is not like the smog in, say, Los Angeles or New York City. The smog in these cities has a stench to it. It is the stench of consumption. The stench of American greed and self-involvement. These cities are polluted by their smog. Not Detroit. In Detroit the air runs thick with the aroma of American virtue. You can smell the blue collar work ethic as far as you can drive it. The dark gray skies which blanket the city exude a fragrance with character. The smog in Detroit smells of the pride of the American worker, the integrity of a hard days work, the pursuit of the American dream. Even though the automobile companies have done their best to sabotage the cities smell by closing factories and moving jobs overseas, it remains pure. The smog in Detroit lingers on to remind me how refreshing hard work and loyalty smell, even after they have been betrayed.

Even though I have never vacationed in Detroit, I have been visiting there since I was a little boy. I go there through conversations with my dad, who spent his early childhood there as well as some of his adult life. One of my fondest memories of my own childhood is spending countless hours with my dad in Detroit. While we are there we sometimes visit family. I have many relatives whom I only know through my visits to Detroit with my dad. They are all wonderful people and every time that my dad and I pop in to say hello to them, I like them even more.

Sometimes my dad and I will go to Detroit to do some sight-seeing. Dad has driven me around the city, showed me how to get around on my own. He’s shown me the geographical implications of 8 Mile and 10 Mile Roads. He’s driven me through the industrial areas to show me the car factories. He’s taken me out to the suburbs like Auburn Hills. He’s taken me downtown to look out over the water in the dead cold of winter. And he’s taken me to see Tiger Stadium. 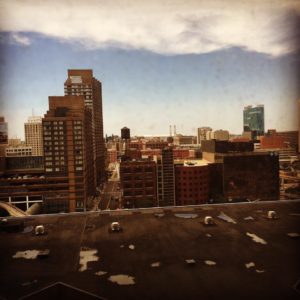 This invariably brings me to the main reason that I visit Detroit so much with my dad. For the sports. I could, quite possibly, be the biggest fan of Detroit’s professional sports teams that has never set foot in the state of Michigan. I love the Tigers, the Lions, and the Pistons. I would love the Red Wings, too, but they play hockey. And being that I live in and have spent the majority of my life in Texas exempts me from having to follow hockey. I guess I’m just lucky. But if I did follow it, my team would be the Red Wings. I have watched the Detroit teams with my dad for as long as I can remember. And for as long as I can remember, I don’t remember much winning. Of course there was the Tigers in the World Series in 1984, but I was too young then to remember much of that. Also, there was the Pistons winning back-to-back NBA championships in 1989 and 1990. This I do remember and cherish. But other than that, it has been a long, grueling journey of perpetual heartache. I remember about five years ago, I asked my dad when the Tigers were going to turn around their losing ways. He told me to just wait, with the bright young pitching that the team was developing at the time, they would be contending within the next five years. Now, five years later, the Detroit Tigers are coming off of the second worst season in Major League Baseball history. When I ask my dad about this, he insists that next year will be better. This time he might be right, there is no where to go but up. And when the Tigers do win the World Series again in 2068, I don’t want anyone to try and accuse me of being a bandwagon fan.

I love watching the Detroit teams with my dad. Even though they usually lose, there are no better teams to support with someone you love. I get to watch the Lions every Thanksgiving with my dad and I get to go and watch the Pistons with my dad when they come to play the San Antonio Spurs every year. Ever since I was in middle school, these have been some of my favorite traditions. These times are special to me because they take me on journeys to Detroit with my dad. I used to love watching my dad watch Barry Sanders run for the Lions, or watch my dad watch Grant Hill drive the ball to the basket for the Pistons. When I experienced these things, to me it was as good as being at Tiger Stadium with my dad when he used to watch Ted Williams drive the ball into right field and drive Tiger fans crazy.

Right now I’m in Detroit. The smell of smog is warming my heart. It’s a little cold outside, but that is okay. I’ll just shift a little closer to the man next to me to keep warm. We are sitting in seats at Tiger Stadium, third base side. The Tigers are down six runs in the eighth inning. Not much you can do about that, except grin and bear it. Maybe next year. I love it just being here in Detroit with the man next to me. I guess that is because that man is my dad. I know my dad loves Detroit deeply, because of all the things that you can smell in the air. As the final out of the ninth inning is made, and the Tigers limp off the field, my dad turns and tells me that it is time to ago home. But as I grin to myself, the only thing I am thinking is that I’m in Detroit with my dad. I’m already home.