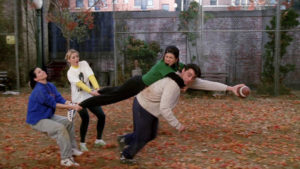 Friends S3:E9 – Well it’s Monday night, a new week has begun. I turn my TV on for some pigskin fun. Click over to that one network with ESP, the lamest game each week is their specialty. You know I gotta get ready, make everything right. ‘Cause all my rowdy friends are coming over tonight. So, are you ready? I mean, are you ready? Are you ready, ready? Are you ready for some football? A Monday night party. This is Kenny “The Jet” Adams, I’m bout to get this thang started. Yo. What it do, Friendinistas? How’s every one doing now that we’ve had a fortnight to process that Donald Trump (a man who just paid $25 million to settle a lawsuit in which he is accused of defrauding 6,000 college students [many of whom were United States military veterans] through his undeniably predatory fake Trump University) will be our next President? I’ve obviously been better. Nonetheless, as much of a self-inflicted authoritarian calamity as America has brought upon ourselves, the sun is still shining each and every day when I wake up (partially because as a writer who works an average of three hours a week, I usually sleep until noon). The birds are still chirping each and every day when I wake up. And, for Pete’s sake, Friends reruns are still streaming on Netflix each and every day when I wake up. Don’t get me wrong. We must all be vigilant about peacefully but purposefully resisting Donald Trump’s administration and every thing it represents each and every day from the moment we wake up to the moment we go to sleep, but that being said…it is also important to remember that life goes on. On that note, we have one of my all-time favorite Friends episodes on the docket to break down during our time together today. What do you say we just jump right into it? Cool, I knew we would be on the same page.

Today’s episode, The One With All the Football, is an indisputable classic. The Friends writing staff is notorious for bringing their A game each year for the Thanksgiving episodes. Season 3 was, of course, no exception as we have a great deal of infamous material to unpack. For starters, Chandler Bing was on fire during this episode with his one-liners or Chan Man Quips as they are endearingly referred to here. I counted at least seven different instances of Chandler delivering a one-liner that was worthy of the bottom section of our blog post. I can’t remember ever writing about an episode thus far where there were so many different one-liners to choose from to select our Chan Man Quip of the Week. The exceptional bar of sarcasm that Chandler sets in this episode resulted from a spectacular collaboration between the writer’s and Mathew Perry. Could the jokes have been more crisply written or sharply delivered? The answer is obviously no. Secondly, the sibling rivalry interplay between Monica and Ross was a hilarious new development for the series. It had already been established earlier in the series that Monica is competitive, but we now find out that Ross is just as competitive. Apparently being ridiculously competitive is a trait that runs in the Geller family. Watching the two reminisce about their childhood football games and then resort back to adolescent behavior in handling their compulsive need to beat one another now as adults was quite enjoyable. This interplay also sets the writing staff up nicely to explore this dynamic between the siblings in the future, as well.

Next, we have another newly established dynamic to discuss in today’s episode. For the first time in the series, Chandler and Joey compete directly for the affection of the same woman. Watching the two roommates and best friends attempt to insult and embarrass each other in an attempt to impress Margha (an onlooker in the park from the Nederlands who is watching our friends play football) is pure unadulterated comic gold. It’s also pleasing to watch Chandler temporarily win the competition but then loose out on dating Margha in the end because he couldn’t resist the compulsion to gloat to Joey about how “the dutch girl chose me.” This dynamic of Chandler and Joey competing for the affection of the same women is also foreshadowing for future story lines to come, particularly an interesting story line next season. Finally, I think it’s important that we point out how spectacular the park set was that the gang played football on. Apparently, according to the commentary for this episode on the DVD box set, this was an indoor set created on a vacant sound stage adjacent to the regular Friends set at Warner Bros. Studios in Burbank, CA. The autumn colors on the leaves are stunning and the set designer did an incredible job of making the stage appear to be an authentic outdoor park. The extras who are enjoying time in the park (particularly the women in apartment window who watches the entire football game) are a nice touch that works in adding to the ambiance. So yeah, game recognize game. I just wanted to shout out the spectacular job that was done by the Friends crew in putting together this set for the today’s episode. Well kids, I think that’s about all I have for today. I just want to take a brief moment to wish everyone out there a particularly happy Thanksgiving. I know, after all we’ve already been through this month, we can use it. Also, if you’re spending time with extended family on Thursday (and that family includes members who supported Donald Trump) don’t be afraid to speak out against hate and on behalf of decency in the United States of America. The election of Donald Trump and everything that it represents is one of the saddest moments in our nation’s history and nobody should be allowed to be comfortable with it (much less celebrate it) for even one moment this Thanksgiving in the presence of decent Americans. That being said, to you and yours, sincerely, Happy Thanksgiving! Catch you in December.

Recap in the Key of Phoebe – This is the one where Joey decides to organize a three-on-three football game in the park, Monica and Ross aren’t sure if they should join in because their mom had once forbid them from playing football, Phoebe starts gossiping about Chandler during her first ever huddle, Rachel is upset that she’s the last one picked for the game and is never thrown the ball, Chandler and Joey compete for the affection of an onlooker named Margha from the Nederlands, and Monica and Ross both try to claim victory and secure the Geller Cup even after they had agreed to call the game a tie.

Chan Man Quip of the Week – [The Setup] Throughout the football game, Chandler and Joey have been competing for the affections of Margha (an attractive woman from the Nederlands who has been watching them play from a park bench). It began when, after Joey agreed to let Chandler go after Margha unimpeded in order to help him get over Janice, Joey infuriated Chandler by suggesting he wouldn’t stand a chance at winning Margha’s affection if they competed for her because he (Joey) is better with the ladies and he (Chandler) is better with “numbers and stuff.” Chandler was so offended that he insisted that they compete head to head for her affection. From then on, throughout the football game, both Chandler and Joey kept upping the ante on trying to embarrass the other one in front of Margha. All of this leads to a play where Ross pitches the ball to Chandler. Chandler then starts running up field when Joey knocks the ball loose and yells, “Fumble!” Joey picks the ball up and starts to return the fumble. Chandler reacts by chasing him and then grabbing his jersey from behind and ripping it into two pieces. Joey stops, turns, and angrily asks Chandler, “What the hell’s the matter with you?! This is my favorite jersey.” [The Knockout] Returning the anger in kind and adding in some snark for good measure, Chandler responds, “Well now you have two. Hey, I am good at math.”

Next post: A Tribe Called Quest – We the People….