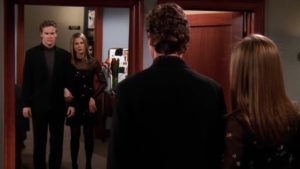 Friends S4:E13 – You say you want a piece of me? Well Baby, take a big bite.. Oh, hey. Sorry, I didn’t see you come in, girls and boys. I was, umm…yeah. I was just singing a little Pantera which is kind of weird because I don’t really listen to Pantera. (It’s almost as if I have an ulterior motive for singing 80’s glam medal ?) Anywho…how’s it going this prodigious Monday afternoon, mis amigos? I hope everyone had a splendid week off last week. I know I sure did. I used the reprieve from the blog series last Monday as an opportunity to work on other projects. What? No, Johnny, I didn’t jet off to a resort. I stayed on my grind. No, Johnny, not like the president. Ha ha, I get it. The president always jets off to a resort to stay on his grind. Touché, Johnny, touché. Anyway, yeah…rather than use my week off to find a beach, I used it to be a productive pop culture writer for theLeftAhead. Keep your eyes glued to the site over the coming weeks and you might figure out what I’ve been up to. Then again, maybe you won’t.

So, now that Johnny has gotten in his crack of the day, with our time today class, I want to talk about the frustrating turn the Chandler and Kathy storyline took in this episode. When last we left them, Chathy were cruising down Love Bird Highway heading towards a destination of Happily Ever After. Or so we thought. After all that Chandler put his friendship with Joey through in order to be with Kathy in the first place, could the way things play out between the two lovers in this episode be any more ridiculous? Man, this was frustrating to watch all those years ago and remains frustrating to watch over and over again in the Friends Vortex to this very day. Come on, Chan Man. You’re really going to get insanely jealous over what your girlfriend does in a play? We’re talking about acting here, bro. I mean, seriously. We’re talking about acting. Hey, don’t you go nodding your head in agreement with my over there, Kathy. Sure, Chandler got irrationally jealous but really? You’re going to get in a fight with your boyfriend where he accuses you of cheating with your co-star and then immediately turn around and do exactly what he was accusing you of? REALLY? I understand that you’re both upset but if anybody has the right to be upset, it’s Joey. I mean, he almost lost his best friend over the two of you having this magical connection only to find out that the antidote to the magical connection was the next actor to come along? Like, literally five episodes later? I mean, Joey has cartons of milk that Chandler has left in his refrigerator that he’s had longer relationships with, for Pete’s sake (and when I say Pete…yes, I mean wannabe Ultimate Fighting Champion Pete Becker). I mean, seriously. Joey’s acting career has more stability than the Kathandler relationship. Sorry, Joey. Also…sorry, Joey. Just know that the audience is with you on this one. Clearly, the thinking that Chandler did in the box during Thanksgiving wasn’t as good as we originally thought.

On that note, I’m going to dismiss you all a little early today, class. Studies indicate that it’s extremely hard to learn when your teacher is angry and I’m clearly not going to get over this Chandler and Kathy fiasco quickly enough to get any more production out of the day. Also, did I mention at the top that I’m a little under the weather? I caught a cold last week when a winter storm found it’s way to Colorado’s Front Range. While I’m pretty sure it’s not the flu (thank goodness), a little extra rest this afternoon couldn’t hurt, right? So, enjoy the rest of your day and week. I’ll see you bright and early next Monday when hopefully the streets of Philly will be LIT AF but more likely, Tom Brady and Bill Belichick will once again be celebrating with a nice, quite brunch among friends at the offices of the National Football League Referees Association. Be well and Fly Eagles Fly!

Recap in the Key of Phoebe – This is the one where Chandler gets irrationally jealous about Kathy simulating sex in a play with a really attractive guy named Nick and uses a “hot and heavy” test to try to determine if she’s cheating on him, Ross serves as Chandler’s support system by repeatedly going with him to watch his girlfriend simulate sex in a play, Rachel meets and develops a crush on a Bloomingdales client named Joshua (after initially being frustrated with being stuck in the Personal Shopping department after her department was eliminated), Joey makes pancakes and adjusts to his new role hosting the gang in his new apartment, Monica becomes frustrated that she’s no longer the hostess, Phoebe asks to use Monica’s old high school clothes as maternity clothes, and Chandler confronts Kathy about Nick which causes a fight that eventually leads to Kathy cheating on him with Nick and effectively ending the debate over testing what it means to be “hot and heavy” on stage.

Chan Man Quip of the Week – [The Setup] Phoebe and Joey are chilling at Central Perk when Ross and Chandler arrive from watching Kathy’s play. They all exchange heys before Phoebe asks, “Ooh! How was Kathy’s play?” Ross responds, “Well, Kathy gets half-naked and simulates sex with a real good lookin’ guy.” [The Knockout] An exacerbated Chandler follows up by revealing, “Yeah, it’s like someone literally wrote down my worst nightmare and then charged me $32 to see it!”