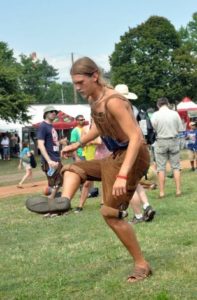 Friends S6:E8 – I’d been running this scam for two years now and up until this point, it had been working beautifully. I’ve gotten two administrative assistants, one accountant, and half a dozen random visitors in the office to sleep with me by pretending to be a a big shot here at Ralph Lauren. The scam is always different, that’s part of the beauty in it. I’ll tell one woman I’m a designer, another I’m an Executive Vice President, another I’m a trust fund baby that sits on the Board of Directors. Hell, I even bedded Kim, that high level executive last year by pretending to be Ralph Lauren’s nephew working in the mail room on a summer internship between semesters at Harvard. Woman are so naive it doesn’t really matter what you tell them as long as you project a combination of power, privilege and wealth. I knew it was a risk but the minute Rachel’s friend walked into the copy room, she was just so blonde and I could just sense she was extremely gullible that on an impulse I just decided to go for it. Maybe it was the thrill I was getting from the boldness of the play or maybe it was just me letting my resentment that I was never able to add Rachel herself to my list of conquests (Rachel is soooo hot, by the way) but for whatever reason, I decided to introduce myself to Rachel’s friend Phoebe as Ralph Lauren, himself. Of course, my instincts were correct. She bought it hook, line, and sinker. Within minutes of introducing myself to her as Ralph Lauren, we were making out right there in the copy room. After our make out session, I got her number so we could meet up later to take things to the next level. When I called Phoebe to hook up, she wanted to see the penthouse apartment I pretended to have (ya know, since she thought I was Ralph Lauren). Obviously I couldn’t invite her over to the tiny studio apartment that I actually have (and share with two roommates) so I told her my penthouse was being renovated. She bought it and invited me over to her place. We sealed the deal that night (which was amazing, by the way…Phoebe is a firecracker in bed). After the encounter, I left and went home. I was walking on cloud nine thinking that this was my most-impressive scam to date. Unfortunately, when I went to work the next day, things started to unravel. I found out through the gossip chain that Rachel had told Kim that her friend Phoebe had made out with Ralph Lauren in the copy room and I started to panic. After all, Ralph Lauren is a married man and if this got back to him and in defending himself against the accusation he linked the rumor back to me, I would be almost certainly fired. Luckily, I made it through that entire day back at work without being forced to face the music. The next day, though, it got worse. Apparently, Rachel went back to Kim and pointed the finger at me having figured out (because of my long hair and the lucky hacky sack I carry with me everywhere I go) that it was me that made out with Phoebe and not Mr. Big Boss. I was officially in panic mode until I found out that because of sexual tension on the elevator between Ralph and Rachel, Kim didn’t believe her! She actually believed that Rachel made up the second story about me because she thought Rachel was hooking up with Ralph to get promoted into Kim’s job! Thank God Kim is so paranoid about Rachel’s career ambitions. Bro, I think I’m in the clear! I gotta say, though. That was too close a call for comfort. Maybe it’s time I change my ways? Yeah, I can’t keep running these scams, I really need this job. So it’s settled. From now on, no more trying to bed women I meet at work. Then again, on second thought… I wonder if I can convince Phoebe to convince Rachel to have a three-way with me?

What is good, Friendsters? I hope you’ve enjoyed our quick dip of the toes into the world of Kenny the Copy Guy. What a tool that guy is, right? He’s lucky he was operating in the late-1990s and not today. That guy is a royal Me Too monster. Hopefully, he eventually got what he and his hacky sack had coming to them. Any who, we otherwise just have some quick business to follow up and then we’re off to the races heading into Thanksgiving week where next Monday, we’ll be covering probably the greatest FRIENDS Thanksgiving episode of all-time. But before we get you off in the fast lane to Turkey Town, that little business we need to take care of…I’m excited to announce that I’ve graded everyone’s homework assignments and the Ross Geller: Overrated, Underrated, or Properly Rated results are in. Please see them below and otherwise, have a great week!

Overrated:
33 percent of the vote

Underrated:
34 percent of the vote

Properly Rated:
32 percent of the vote

Recap in the Key of Phoebe – This is the one where Phoebe tells Rachel that she fooled around with Ralph Lauren while making copies at Rachel’s work, Rachel tells her boss the Ralph Lauren gossip to curry favor, Ross whitens his teeth to impress Hillary (Monica’s assistant chef) on their first date, Chandler complains to Joey that Janine is making Joey’s apartment too feminine, Monica makes Chandler do a bunch of “girlie” activities while he’s lecturing Joey about standing up to Janine, Joey learns not to eat potpourri while getting in touch with his feminine side, and Rachel finds out that (just like Phoebe) her boss had a thing with Kenny the Copy Guy.

Chan Man Quip of the Week – [The Setup] Chandler is walking across the hall to Joey and Janine’s to try to spend some “guy” time with Joey after having spent a pretty “girlie” day with Monica. When he walks in, Joey and Janine are sitting at the kitchen counter also engaged in a “girlie” activity. Joey looks up at Chandler and says, “Hey Chandler. Come on in. We’re knitting pot holders.” [The Knockout] Chandler (who is already irritated by the feminine changes that Janine has made to Joey’s apartment) glares at them and snaps, “No thanks, Josephine.” He promptly turns and leaves Joey and Janine’s apartment.
​
#TheChickAndTheDuck