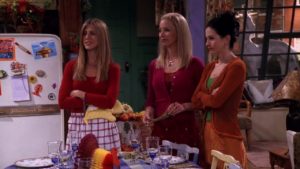 Friends S6:E9 – Romans, countrymen, FRIENDS, lend me your ears. For alas, it is the time of year when the giving of thanks is near. Happy Turkey Day eve eve eve, Phoebes and Phoebos! After all I’d be remiss if I didn’t point out that the holiday season is upon us, hmm. Today, we have the distinct privilege of recapping not only one of the funniest Thanksgiving FRIENDS episodes but, in my humble opinion, probably one of the funniest FRIENDS episodes, period. The steal from a prior FRIENDS Thanksgiving episode, the reasons today’s episode are hilarious are three-fold. 1) Rachel’s shepherd’s pie trifle fiasco 2) The whole Ross got high thing 3) The escalating declarations of Truth Day.

Taking these in order, we’ll start by discussing Rachel’s shepherd’s pie trifle. Rachel, a notoriously bad cook, for some unexplained reason, decides to volunteer to make Thanksgiving dessert and Monica, a notorious control freak, for some unexplained reason, decides to allow Rachel to make Thanksgiving dessert. Perhaps it was the guilt of just recently kicking her out of the apartment so that Chandler could move in? Who knows what compelled Monica to let Rachel make dessert but knowing a) Monica is a control freak and b) she is trying to host a perfect Thanksgiving in order to get her parents to like Chandler, it seemed to be on a borderline Gandalf Gaffe-worthy level of implausibility but whatevs… I’ll let that one slide. At any rate, Rachel is following a recipe from a magazine and when Ross notices that the reason she is putting “beef sautéed with peas and onions” in the trifle is because the pages of the magazine were stuck together he sets Joey up for an epic laugh-out-loud moment when Joey’s knee jerk reaction to hearing pages stuck together is to yell out, “Chandler.” And since Ross and Joey want to show Janine and her dancer friends what if means to be hot in the new world, they can’t afford to wait around for Rachel to restart the dessert so they decide not to tell her she did it wrong. They then convince everyone to go along with pretending they like it which is also hilarious. Everyone else besides Joey and Ross scatters to not have to eat the dessert (Chandler even frames a bird for why his landed on the street while he was enjoying it on the balcony). But the funniest moment of all has to be that while everyone else is horrified by having to eat shepherd’s pie trifle, Joey actually likes it and eventually eats everyone else’s. “What’s not to like? Custard? Good. Jam? Good. Meat? Gooooood.” Can’t argue with that logic.

Moving on to the whole Ross got high thing, my first observation (having now lived in Colorado the last five years) is that the whole premise that Ross would be too scared to admit to his parents that he used to smoke marijuana in college seems really dated in 2019. I mean, I think it’s pretty universal nowadays that the stigma no longer exists. Ross smoked wee in college? Oh no, look out for that crazy guy. Did he (gasp) drink a beer before he turned 21 too? (I think you get my point.) Having acknowledged that, the fact that he randomly decided to frame Chandler when his parents caught him smoking in college and that is the foundation for why Monica’s parent’s don’t like her boyfriend years later is pretty damn funny. I imagery of Ross melting his dad’s records because evidently, he wasn’t good at handling his high is pure comedic gold. (There’s a reason why the people have spoken and last week unequivocally declared once and for all… Ross Geller: Underrated.) Add in what we already know about the Welcome Back, Kotter Ross used to sport in his college days and the image of him smoking doobies in his room at his parent’s house, getting caught, panicking, and then explaining that Chandler was smoking and then jumped out of the window…it’s just so good.

Finally, we have the escalating declarations of Truth Day. FRIENDS has these moments of mutually assured destruction disclosures from time to time and they make for hilarious television. This one begins with a blood match between Monica and Ross. Monica strikes first by telling Jack and Judy that Ross smoked the pot then adds for good measure that Ross (not the mail man) stole Jack’s playboys. Ross claps back by informing them that Monica (not Hurricane Gloria) broke the porch swing. Monica, already in the lead by a mile, piles on by telling her parents that Ross hasn’t worked at the museum for a year. Ross then attempts to rally by saying the one thing Monica wasn’t ready to tell…that she and Chandler are living together. Finally tasting her own medicine and realizing it is bitter, Monica goes for the jugular by telling her parents that Ross and Rachel got married in Vegas and that Ross got divorced…again! Game. Set. Match…Monica Geller. Of course Phoebe, Rachel, and Joey chime in for good measure to set up Judy Geller’s legendary response. Oh my. The escalating declarations of Truth Day makes a strong case for being one of the single most brilliant moments of the entire series run. My comedy heart and belly are full just writing about it. So full, in fact…I better call it a day. After all, Thanksgiving 2019 is in three days and I don’t want to spoil my appetite for turkey, gravy, stuffing, mashed potatoes, peas, and best of all…pumpkin pie. Man, oh man I can’t wait. Also, if someone could make some righteous mac and cheese in case a boy who doesn’t like Thanksgiving comes over (err.Chandler) that would be great. Gobble gobble. See you in December for a trip down the millennial moment memory lane. Adams out.

Recap in the Key of Phoebe – This is the one where Jack and Judy Geller don’t like Chandler because Ross got caught by his parents during college smoking weed in his room and blamed Chandler (claiming he had jumped out of the window), Joey (and Ross) would like to show Janine and her dancer friends what it’s like to be hot in the new world, Monica doesn’t want to tell Judy and Jack that she and Chandler are living together because they don’t like Chandler, Chandler tries to impress Jack and Judy during Thanksgiving, Phoebe has a crush on Jack, Rachel gets the pages of a magazine stuck while making Thanksgiving dessert and ends up making a trifle with a layer of shepherd’s pie, and the air is cleared between Monica’s parents and her boyfriend when Ross is forced to own up to “being tricked” into smoking marijuana in his bedroom during college because evidently Thanksgiving is in fact Truth Day.

Chan Man Quip of the Week – [The Setup] The gang plus Jack and Judy Geller are at Monica and Chandler’s apartment celebrating Thanksgiving. Frustrated because Ross had stalled on correcting the record with his parents about framing Chandler for smoking weed, Monica has just informed her parents of such and sparked a chain reaction of truth telling from the entire gang sans Chandler. After processing the information she’s just received, Judy says, “That’s alot of information to get in in thirty seconds! Alright Joey, if wanna leave, just leave. Rachel, no you weren’t supposed to put beef in the trifle. It did not taste good. Phoebe, I’m sorry, but I think Jacques Cousteau is dead. Monica, why you felt you had to hide the fact that you were in an important relationship is beyond me.” Before she can continue, Jack interjects, “And we kinda figured about the porch swing.” Turning to Ross, Judy remorsefully asks, “Ross, drugs? Divorced? Again?” Jack piles on with, “What happened son?” Hoping to salvage a shred of dignity, Ross explains himself with, “I-I uh, I got tricked into all those things!” Turning away from her disappointment of a son, Judy walks over to Chandler and says, “Chandler! You’ve been Ross’s best friend all these years, stuck by him during the drug problems. And now you’ve taken on Monica as well. Well, I don’t know what to say. You’re a wonderful human being.” Shocked at the turning of the tables, Chandler delightedly responds with a resounding, “Thank you!” Jack moves in to hug Chandler while saying, “No! Thank you!” After the embrace, Jack turns to his kids and says, “Monica, and Ross! I don’t know what I’m gonna do about the two of you!” [The Knockout] Beaming from ear to ear, Chandler tells Judy and Jack in a parent-like tone, “I’ll talk to them!”
​
#TheChickAndTheDuck