I’m Gonna Have a Baby 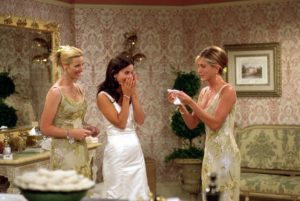 Friends S8:E1 – What is good, Friends 20/20 Nation? It is so weird to back in class but also kind of cool. How was everyone’s summer? I know the summer started with so much promise with the vaccine roll out and a short-period where it felt like things were getting back to normal. I remember how exciting it was back in May (as we were just wrapping up Season Seven) to finally be vaccinated and getting to experience things like hanging out with friends and visiting restaurants again. The way the summer started was such a breath of fresh air. But, of course, here in America we just can’t seem to have nice things. As the summer rolled on and the Delta variant started to rage due to so many science-rejecting anti-vaxxer morons living amongst us…it started to become clear that the good times earlier this summer were just a fleeting moment in time and unfortunately not the beginning of the end of the pandemic. So here we are bracing ourselves for more pandemic pain this fall but on the bright side, at least we’re in a better place than we were last fall with the pandemic. And while this summer didn’t ultimately fulfill all of the promise that it started with, there was still a lot of positives to reflect back on and be thankful about. For instance, I was able to make it down to my undisclosed beach location during my summer break before concerns of the Delta variant started to dissuade travel. I can also report on behalf of theLeftAhead that my editor Ted James both dropped a new track and also thread the needle on safely and successfully booking and taking an international trip to Scotland this summer before the Delta variant reared its ugly head. Finally, and most relevant to our purposes here…the long-rumored and COVID-delayed Friends: The Reunion was finally released on May 27th on HBO Max! Since our last convening as a class for Season 7 was ten days earlier on May 17th, 2021, incredibly, this is our first opportunity to discuss the reunion (aka the biggest Friends pop culture event to occur during the seven years we’ve been doing Friends 20/20) as a group. I thought the reunion was excellent, so well put together and such a heart-warming trip down memory lane. There is so much to dissect from the reunion special that, rather than try to dive all the way in today, I thought we could better give it the attention it deserves by discussing it weekly throughout our semester this fall by weaving it into our ongoing discussion of Season 8. Does that sound good with everyone? Alright, great…then it’s settled. More about the reunion special next week and throughout the fall.

For now, let’s turn our attention to the aftermath of the big reveal from the Season Seven cliff hanger: Rachel is pregnant. If you remember, we as an audience were filled into the news as the camera zoomed in on Rachel at the end of the Season 7 finale. Now, as we begin Season 8 at the bridal party photo session at Monica and Chandler’s reception, we get to enjoy watching Phoebe and then Monica learn the news that we had just spent an entire summer digesting. After Monica denies being pregnant, Phoebe realizes that Rachel is and tries to cover for her by suggesting she is the one that is pregnant and that James Brolin is the father. This ruse doesn’t last long. Monica quickly figures it out that Rachel is pregnant when she observes Rachel spitting champagne back into her glass. After Phoebe suggests that Rachel should take a second test to be sure that she is in fact pregnant (and not a mistake), Monica insist that Rachel take the test right away at the reception as a wedding gift to her. After Rachel agrees and takes the test, Phoebe reports that the test is negative which elicits a strong emotional reaction of disappointment in Rachel. We quickly learn that Phoebe was playing a “risky little game” by lying to Rachel about the negative result in order to figure out how Rachel really feels about being pregnant. Knowing now that Rachel really wants to have the baby and is in fact pregnant sets up one of the sweetest moments in series history as Monica and Phoebe share in Rachel’s joy. Of course the question Monica and Phoebe along with us in the audience are dying to know is, “Who is the father?” And that, class, is a reveal to be left for another day. For now, no better way to rap up than to bask in the joy of that moment between Rachel, Monica, and Phoebe. It’s good to be back and also to have Friends: The Reunion to chew on this fall but as you know, I’m the type of professor that likes to ease back in to a new semester. That being the case, class is now dismissed for today. See you next week.

Recap in the Key of Phoebe – This is the one where everyone thinks Monica is pregnant on her and Chandler’s wedding day until Phoebe realizes that Rachel is pregnant but isn’t ready to admit it yet so Phoebe claims that she is pregnant and makes up that James Brolin is the father, Chandler can’t show off the new dance moves he wanted to surprise Monica with because his shoes are too slippery on the dance floor, Ross dances with all of the little girls at the wedding to impress Mona from Monica’s restaurant, Joey gives a bizarre toast designed to demonstrate his range as an actor in order to impress Chandler’s Mom’s date Dennis Phillips with hopes of being cast in his new Broadway production, Monica discovers Rachel is the one that is pregnant when Rachel spits out champagne and asks Rachel to take another pregnancy test as her wedding gift, and when Rachel finds out that the test confirms that she is pregnant (after Phoebe plays a risky little game lying that the test was negative), Rachel declares, “I’m gonna have a baby.”

Gandalf Gaffes – I went back and forth about adding this one to the list but in the end, I decided it needed to be documented even though it might seem a little nit picky. A size seven shoe is an unusually small shoe size for a grown adult male of Joey’s height and weight. The idea that Joey actually had feet that unusually small and none of the friends (particularly Chandler) had ever noticed this about Joey seven full years into the series seems so preposterous, it needs to be documented as a Double G. Clearly the writer’s were just adding this detail to the story line for this particular episode as an easy way to generate some jokes but all the same, it would have been impossible for Joey’s friends to just be noticing this about him now at Monica and Chandler’s wedding. (What? Is his identical foot guy a ten-year-old kid?) Furthermore, Matt LeBlanc’s feet are visibly the normal size for an adult male of his height and weight further making it unreasonable to suggest that Joey’s feet are that unusually small. Given that I’ve already acknowledged that this a a nit picky Gandalf Gaffe, this is a simple, minor a level one infraction.

Gandalf Gaffe #28: Joey admits to Chandler that he has freakishly small feet (size 7) when Chandler discovers how small Joey’s feet are during his and Monica’s wedding. It would have been impossible for Joey to have had feet that small for an adult male of his size and feet and for none of his friends to notice for the first seven years of the series. This silly detail is also contradicted by video evidence throughout the series of the “normal” size of Matt LeBlanc’s feet.

Chan Man Quip of the Week – [The Setup] Joey finds Chandler in the hallway of his and Monica’s wedding reception practicing his dance moves on a floor where his shoes have traction. Right before Joey finds him, Chandler says to himself while finishing his dance moves, “And the world will never know.” When Joey finds Chandler, he says, “hey” and then asks, “Did you talk to Dennis about me yet?” Chandler responds, “Yes, I told him how talented you were. I told him all about Days Of Our Lives.” Panicking, Joey protests, ” No, no! No! No! You don’t tell a Broadway guy that! Now he just thinks I’m a soap actor.” [The Knockout] Clearly sensing an opportunity to pounce on what he had discovered about Joey earlier in the reception, Chandler unloads the sarcasm with, “But you’re not just a soap actor. You are a soap actor with freakishly tiny feet.”
​
#TheChickAndTheDuck