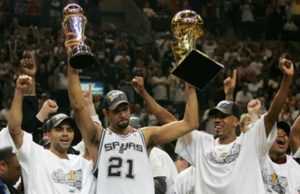 Evaluating the Greatest NBA Players in the Post-Jordan Era

With the news last week of Shaquille O’Neal’s retirement from the Boston Celtics and in the mist of an entertaining NBA Finals, I thought this would be an appropriate time to open up a debate here at theLeftAhead.com about the best NBA player in the post-Michael Jordan era. I don’t mean since 2003, when Jordan limped off of the court as a Washington Wizard. I mean the true Post-Jordan era, since his retirement from the Chicago Bulls in 1998.

As we speak, Dirk Nowitzki and LeBron James are doing battle trying to seize an opportunity to erase their names from the list of best NBA players to never win a championship. But the question at hand is who has been the greatest player in the NBA since 1998. For the purpose of being thorough, I will open up the debate by ranking every player worthy of consideration from this era. Needless to say there are only three players on this list that someone could make a legitimate argument for being the greatest. They are, in no particuliar order, Shaquille O’Neal, Kobe Bryant, and Tim Duncan. So please, do not come on theLeftAhead.com and make an argument that any player besides these three is the greatest of the era because we will be forced to put you in the penalty box for two weeks.

Let me begin by saying that my list is not subjective. It is based on a simple mathematical formula for determining NBA greatness. For the sake of keeping things entertaining, I will unveil my list first and then present the mathematical formula that determined it afterward. Let the blood boiling begin.

Before you start typing your profanity laced responses about me being an idiot, let me lay out a couple of clarifications. First, this is a ranking of the “greatest” players of the era, not necessarily a ranking of the “best” players of the era. Obviously, a ranking of the “best” players of the era would have LeBron James much higher than Tony Parker, for example. I define greatness by winning championships and so my mathematical formula is heavily weighted towards players who have won rings. Secondly, whether my formula skews Chauncey Billups ahead of Dirk Nowitzki, for example, is irrelevant to the task at hand. As I stated before, there are really only three players in the conversation and I think that my formula gives a good perspective on how to determine between the true great players of the era. Consequently, I will show later that my formula puts Michael Jordan vastly ahead of all three great players from this era which should add some levity to the debate and perhaps muffle those of you who are foolish enough to argue Bryant is better than Jordan. So without further adieu, let me present my mathematical formula for determining NBA greatness. The complexity of this formula wll shock you.

According to the formula,

18th – Jason Kidd = 0 points (I put Kidd on the list because he was the only player I could think of in the era that should be on the list of greatest players but has not earned any points according to the formula. Perhaps that will change in the next week.)

Here are a couple more notes about my ranking system. First, I did not include ranking role players, so that is why Derrick Fischer, Bruce Bowen, Robert Horry, Lamar Odom, ect. are not on the list. Every championship team of the era (with the exception of the 2004 Detroit Pistons) has had either two or three “great” players, so those are the players I ranked. Secondly, players with tie scores I made subjective determinations about their resumes to decide who I ranked higher. For example, in my opinion Shaq is second and Kobe is third because Shaq was the dominant player for three championships and a side kick on only one whereas Kobe was the dominant player on only two championships and the sidekick on three.

By the way, for that perspective I alluded to earlier. Shaq is now retired with his 15 points under this formula. Tim and Kobe have a long way to go to try and get in the Michael Jordan conversation of greatness. Here is an evaluation of Michael Jordan based on this formula.

Hence, the phrase the post-Jordan era.

Previous post: The JLOA – Superman Needed His Union Too

Next post: Ted James – Save Our State (feat. Jennifer James)