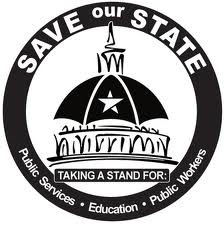 This is not a losing fight, we can push back, we are right
We can rally, we have might, they cannot defend this type
Of short-sighted budget gripe, that infiltrates the workers rights
That instigates tuition hikes, that decimates our equal slice
Of choices had for futures bright, our voices won’t be silenced like
Wisconsin, we are here, unite, we’re launching banners, chants recite
“3.2 just won’t do”
It’s raining in this state, that money’s long over due
They’re draining investments in our kids which only benefits the few
Maintaining current spending levels keeps the teachers in our schools
Which gives society the tools to innovate, recessions cool
But the values we orate should legislate the people’s view.