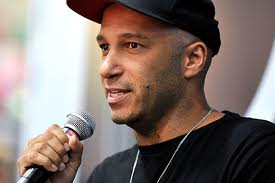 Tom Morello: ‘Paul Ryan Is the Embodiment of the Machine Our Music Rages Against’
Rage Against the Machine’s guitarist blasts Romney’s VP pick and unlikely Rage fan

Last week, Mitt Romney picked Paul Ryan, the Republican architect of Congress’s radical right-wing budget plan, as his running mate. Ryan has previously cited Rage Against the Machine as one of his favorite bands. Rage guitarist Tom Morello responds in this exclusive op-ed.

Paul Ryan’s love of Rage Against the Machine is amusing, because he is the embodiment of the machine that our music has been raging against for two decades. Charles Manson loved the Beatles but didn’t understand them. Governor Chris Christie loves Bruce Springsteen but doesn’t understand him. And Paul Ryan is clueless about his favorite band, Rage Against the Machine.