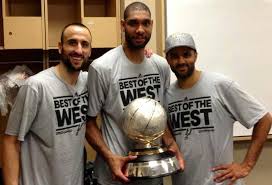 Same As It Ever Was – Patience is a critical attribute for people of faith. Without the fortitude to believe with steadfast patience, people are likely to lose faith sooner or later. A prolonged void from seeing hope manifested with one’s own two eyes does not bode well for keeping faith over the convenience of instant gratification, especially in today’s culture of lighting fast information and perpetual distraction. Without patience, this world will eventually use logic, science, probability, misinformation, fear, or whatever else it needs to to convince you that what you believe in your heart to be true actually is false and that you are better off abandoning your faith. For all of the San Antonio Spurs fans who have had the fortitude to continue to believe in our hearts for six long years that this core group still had the ability to make a run to the NBA Finals, our patience was rewarded on Monday night as the #BlackAndSilver swept the Memphis Grizzlies out of the Western Conference Finals by winning Game 4 at FedExForum 93 to 86.

Tony Parker made about as emphatic a case for player of the game honors as anyone could imagine pouring in 37 points on 15-21 shooting from the field and 6-6 from the free throw line. Tony also dished out 6 assists and scrapped together 4 rebounds for good measure. After getting poked in the eye (apparently not that eye, Drake and Chris Brown) in the middle of the fourth quarter by Marc Gasol, Tony returned down the stretch to hit two clutch jump shots that sealed the victory for the Spurs. The first, a three pointer with two defenders (one of them Gasol) leaping towards him and the second a classic Tony pull-up jumper off of the screen-and-roll. Just as he had done against Golden State, Tony Parker used what was once considered his liability as a player (his jumper) to ice a playoff series. I think that it is time for NBA writers and pundits to end the ridiculous exercise of merely allowing Tony to be in the conversation of best point guards in the league and give this man his due. If I hear the names Chris Paul, Russell Westbrook, Stephen Curry, or Derrick Rose mentioned in the same breath as Tony Parker during these upcoming NBA Finals, I might start to become suspicious that ESPN’s NBA analysts are currently auditioning for a more lucrative opportunity to cover President Obama’s Benghazi “scandal” for Fox News. Tony Parker is currently the best point guard on the face of the planet, period. There is absolutely no reason for there not to be a consensus on this matter. If NBA pundits are simply incapable of avoiding the monotony of having these conversations for the sake of having these conversations, then please start putting Tony in the proper one. Parker should be in the conversation with LeBron James and Kevin Durant for best basketball player in the world. He truly has become that great.

On Monday night, Tony’s greatness was the biggest factor in determining an outcome that affirmed the faith of the Spurs fans who were patient enough to continue to believe in our hearts that Tony, along with Manu, Timmy, and Coach Pop would eventually get us back to where we are right now despite an intimidating mountain of evidence to the contrary. The world sure did its best over the last two years to shake the faith loose from as many Spurs fans as it could pick off. With the best record in the NBA, San Antonio was knocked out of the 2011 NBA Playoffs in a shocking first round upset at the hands of these Memphis Grizzlies. Undefeated in the postseason, riding a 20 game winning streak, and up 2-0 in the Western Conference Finals, San Antonio collapsed against the Oklahoma City Thunder losing four straight games to find ourselves eliminated from the 2012 NBA Playoff in what seemed like the blink of an eye. The San Antonio Spurs, as an organization, clearly never lost faith. The fact that Tim Duncan and Greg Popovich will be entering into their fifth NBA Finals 14 years after their first is a testament to the extraordinary faith and resolve of the finest professional sports franchise in North America. In the post-game press conference after Game 4, Coach Popovich commented extensively on this remarkable and irrational run to his fifth NBA Finals. He said, “I’m sure that we’ve been a team that’s probably been written off, like they’ve had their day, and it seems logical…I would probably have said the same thing if I was a fan from the outside looking in but it doesn’t show the way these guys compete.” Pop went on to say, “I think a lot of people think that the grass is greener on the other side…and if we change this coach or trade these guys it’s all going to be nirvana after that. But I think that if you stay the course and you’ve got leaders who are quality character people, you follow them for as long as you can. I’ve been hanging on Timmy’s coattails for a long time.”

Now, after a coach, an organization, and a city have ridden Tim Duncan’s remarkable coattails for fifteen years, a return trip to the NBA Finals has manifested itself in 2013. As to be expected, there are literally millions of Spurs fans around the planet that will tell you that they never lost faith. On the surface, it is understandable that every Spurs fan would feel this way right now. It is a special time to be a Spurs fan and also a special time to be a San Antonian. Everybody that would like to be should get to be a part of the experience. And it is not lip service to suggest that a “the more, the merrier” mentality runs deeply into the cultural fabric of our city. But the deepest rewards are reserved for the purest of heart. Asking oneself, did I truly have the patience to remain vigilant against the onslaught of evidence to the contrary? This is a question that can only be answered by peering deep into depths of one’s own soul. The logic, science, probability, misinformation, and fear that the Spurs’ core players were too old to get back to the NBA Finals had become awfully compelling over the past couple of years. The world had mounted a rather seductive case to convince Spurs fans to abandon our faith. Whether a true believer or whether returning to the flock after losing one’s way, we should be glad for every single person who has decided to be a part of the congregation at this special moment in time. The ability to have one’s faith renewed is a wonderful characteristic of the human condition in its own right. So, welcome home all ye prodigal sons and daughters. We have missed you and we’re glad you’re back. We are going to need every ounce of your enthusiasm, spirit, and commitment because we, as Spurs fans, have absolutely nothing to celebrate yet. Sure, the opportunity to see Timmy, Manu, and Tony compete in the NBA Finals again is a great validation for Spurs fans who have kept faith over the last six years and an exciting opportunity to be baptized into faith for those new or returning to the flock. But we don’t celebrate conference titles around these parts and the next step in our long and weary journey is by far the hardest one. In San Antonio, we don’t celebrate until the Larry O’Brien trophy is in the dutiful hands of Tim Duncan and being hoisted towards the heavens. In San Antonio, we celebrate championships. While this moment in time might seem celestial, there is more work to be done. We are merely knockin’ on heaven’s door.