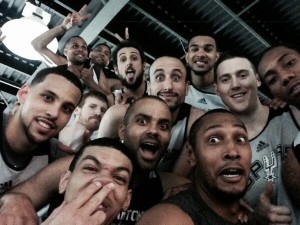 Zambony – On Wednesday night, the Dallas Mavericks came back to the AT&T Center to challenge the San Antonio Spurs to another game of basketball. Unfortunately, the Spurs players came to the arena expecting to play Dallas in ice hockey. San Antonio might have actually fared better had we sent the Rampage players out on to the court because it appeared that, to a man sans Manu Ginobili, the Spurs had no interest in being out there. The zamboni parked deep in the bowels of the AT&T Center had more of a sense of urgency about Wednesday night’s contest than the team with the best regular season record in the NBA. If you had told me Wednesday morning that we were going to get blown out in Game 2 on our home floor, 113-92, I would have assumed that it would of been because Dirk Nowitzki was going to have a monster throwback MVP level performance. This, however, was not the reason that the Spurs were dismantled by our neighbors to the north. Dirk struggled through another pedestrian 16 points on 7-19 shooting but the Mavericks, as a team, played with intensity and moved the basketball as if to put on a clinic to embarrass the alleged ‘best passing’ team in the league. And embarrassed we should have been. The Spurs mustered up only 17 assists on 34 made field goals and turned the ball over an uncharacteristic 22 times to the Mavericks postseason ready 7 turnovers.

Note to the City of San Antonio: I know that Fiesta began early this year, which probably threw off our rhythm as a community because the weekend of Oyster Bake did not coincide with the first weekend of the playoffs, but regardless of the unintended consequence of extending Fiesta to three weeks which probably made San Antonio less festive than usual by the time this past Wednesday rolled around, we need to hurry up and find our Fiesta swagger as a city. The Spurs now have a series on our hands and we need to do our part to make sure that the team goes up to Dallas and handles our business in front of those overconfident Mavericks fans. On another side note, isn’t it funny that after one victory in the series, every single Mavericks fan that you know comes out of the woodworks to let you know that they won as if you weren’t watching the game? Oh Dallas fans, there you go again beating your chest way before it is warranted (and giving your team bad karma in the process). I guess you’ll never learn, but on the other hand, that is part of what makes you so endearing. I love you, Dallas fans.

While Spurs fans can do our part to show that we are playoff ready by getting our Fiesta swagger back, the ball club itself needs to arrive in Dallas for tomorrow’s game angry and focused. The time for HEB Commercials, Frogging, and Team Selfies, albeit totally awesome for the regular season, should be over now. Every player, one through thirteen, needs to match the level of play that player of the game, Manu Ginobili, brought on Wednesday with his 5-6 on three pointers and 27 points and fresh off of celebrating the birth of his third son, Luca. Congratulations, Manu. I’m sure that 2013-14 NBA Coach of the Year, Gregg Popovich, will put together a game plan to counter the things that Dallas was doing effectively to punish us in Game 2. The #BlackAndSilver just need to be locked in and ready to execute from the minute that we step foot in the American Airline Center and we will be just fine in Game 3. Today is the Battle of Flowers parade here in San Antonio. Tomorrow, the San Antonio Spurs need to be ready for battle as soon as the pregame warm ups pause for the singing of The National Anthem. We have not played Spurs basketball yet in this series. Tomorrow, we need to get one right. ¡Viva la fiesta!