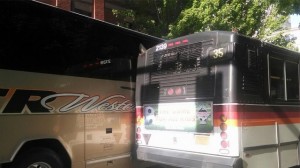 Santeria – It was just one of those things. On the way to the Moda Center for Game 4 of the Western Conference Semifinals, a Portland TriMet bus came out of no where to inappropriately violate the space of one of the Spurs’ team buses. Or maybe the driver of the Spurs’ bus simply swerved after seeing that a snake was suspiciously slivering right smack dab down the center of the road. Either way, a minor accident caused a delay in the arrival of some of the Spurs players to the arena. While we have no way to substantiate it, it has been brought to our attention that the following conversation was overheard between Danny Green and Kawhi Leonard on the bus during the delay as they attempted to kill time waiting to arrive for the game.

Danny: Hey Whi, this is crazy. I can’t believe we’re stuck here just waiting to get to the game. I’m bored. What are you reading?”

Danny: Nice. I love reading that Black & Silver, our team gets mad karma when people share those blog posts online. Someone should start sharing the Black & Silver blog series on the Spurs’ reddit page and we will mos def get the karma we need to close out the Blazers tonight.

Kawhi: I don’t know, D. The good people that are over there running our page on that website seem to care way more about “karma” points than they care about real karma for our squad.

Danny: That’s too bad. Hopefully that type of nonsense doesn’t mess up our karma tonight and we can still go out there and get this sweep.

After finally arriving at the arena, the San Antonio Spurs gave away a magnificent opportunity to punch our ticket to the Western Conference Finals last night by allowing the Portland Trail Blazers to get loose for a massive third quarter. The Blazers outscored the Spurs 35-20 in the third which provided them with the cushion that they needed to keep our reserves at bay in the fourth and defeat the Spurs by a final score of 103-92 in Game 4 of this Western Conference Semifinal series. Player of the game, Boris Diaw, had 12 points on 6-8 shooting but that was the one bright spot for a Spurs squad who collectively had an abysmal shooting night, going 39-88 from the field including 3-18 from downtown while also balancing out Game 3’s perfect free throw shooting performance by shooting an inadequate 11-19 last night. While LaMarcus Aldridge and Damian Lillard clearly looked more comfortable and had their best combined shooting night of the series thus far as a duo (a combined 19-37 from the field), it was an all-around team effort by the Blazers that made Spurs fans’ hopes for a sweep fall apart quicker than a Donald Sterling damage control interview. The Blazers supporting cast combined for 59 points and were instrumental in turning a close ballgame into a blowout during the third quarter. While the floodgates opened when Nicolas Batum converted a four point play that doubled the Blazer lead from four to eight, the overall second half catalyst for the Blazers was little-used Will Barton who filled the Moe Williams’ role of Spur-killer who comes off the bench to torch our squad. With Williams out for the second straight game due to injury, Barton scored 17 points on 7-13 shooting and capped off his night by beating on his chest while hanging on the rim after converting an alley-oop dunk against the Spurs’ third stringers in garbage time. While there is certainly no need to panic yet down here in South Texas, the #BlackAndSilver need to regroup after a bad shooting night and come out refocused and re-energized so that we can play Game 5 back here at home tomorrow night as if it were another Game 7 and we are facing elimination again. Portland will be itching to capitalize on their newly found rhythm and, with nothing to lose, they will be ready to hoop free and loose at the AT&T Center; and playing with that type of swagger is potentially when they are at their most dangerous. The longer that this series drags out, the more confident the young Blazers will become and the last thing that we need is to have to scratch and claw our way into the conference finals. We need our sharp shooters to get back to being comfortable so that we can get the Portland defense back on their heals and in a constant bob and weave as they scramble to defend our three point bombs over Broadway. If the Spurs get back to playing our game, we can and should turn the lights out on a fine Portland Trail Blazers season tomorrow.

Danny: Man, Whi. Now we have to go back home and try to close out the Blazers on Wednesday night. You really got me thinking about this Black & Silver blog before the game and how much karma our team gets when people show love and share the Black & Silver series in pursuit of the greater goal of working together as a community to try to win this chip.

Kawhi: It is good.