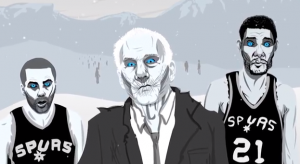 Around the Block – Legend has it that there is a gunslinger who resides out west with a draw that is so fast that it defies the physical laws of time and space. They say that he is so quick that he can do what takes the fastest of shooters almost a second to do (namely catch, TURN, and shoot) in just a fraction of that time. Yes, rumor has it that this man is so speedy that he stopped training with Usain Bolt during his off-season in the summer because he was tired of being held up. This gunslinger, who spent the better part of the last decade searching for precious metals out in California, is so freaking speed of light shattering velocious that he has already had the iPhone 6 for a month but has decided to stop using it because he finds its processing speed too cumbersome to keep up with the Tianhe-2 velocity that his fingers type text message responses like “No Kobe, I still think you’re better than Kevin” or “Hey Phil, I’m sorry but it’s over…It’s not you, it’s me.” By around 2011, people were starting to think that tales of this mythical gunslinger might just be made-up fables that parents in Los Angeles have their nannies tell their children as bedtime stories at night while they are out on the town networking to land their next reality television audition. But then a couple of years ago, as if out of nowhere, Derick Fisher turned up down in Oklahoma. Apparently, Kobe Bryant’s coattails had just become so worn and tattered that he thought he might give Kevin Durant’s a try. Last night, ‘Point Four’ Fisher returned to Texas and the AT&T Center, the scene of his most infamous robbery, to once again face the San Antonio Spurs in the Western Conference playoffs.

The old gunslinger came out firing in Game 1 of the Western Conference Finals, scoring 16 points on 4-6 shooting (all three point attempts) and helped keep his Oklahoma City Thunder within striking distance during the first half of a game that could have very easily gotten away from them early. Fisher, seemingly was the only player that was able to remain calm and help Kevin Durant and Russell Westbrook attempt to deal with the dangerous proposition that the Spurs are coming. The grizzled veteran was OKC’s third leading scorer on the night but, in the end, it was an exercise in futility as the Spurs indeed were coming and coming in waves. Tim Duncan, on his way to player of the game honors, led 5 Spurs players in double figures with 27 points on 11-19 shooting and was able to score at will in the paint in the absence of Serge Ibaka. As a team, San Antonio shot 31-43 down in the interior (72.1 percent) for 62 points in the paint. While league MVP, Kevin Durant, and his all-star teammate, Russel Westbrook, played well in stretches, Danny Green and Kawhi Leonard led the Spurs’ perimeter defense to contain the electric duo to a manageable 53 points on 19-40 shooting. Oh, Kawhi also did this last night.

Considering that OKC’s superstars received next to no help on the offensive end, other than Fisher and Reggie Jackson (who chipped in 13 points), they were hard-pressed to have a realistic chance to keep pace with the Spurs offense (and the easy shots it was creating) for 48 minutes. The Thunder were forced to experiment with unconventional lineups and were never able to get into a sustained offensive rhythm as a team. In the end, the San Antonio Spurs defeated the Oklahoma City Thunder 122-105 last night to strike first in the 2014 Western Conference Finals. While the victory seemed to come almost as easily as we have been generating wins since Game 7 of the series with the Mavericks, Spurs fans should continue to remain cautiously optimistic. As long as Durant and Westbrook are on the court, no lead in a game or in the series is ever secure and we need to continue to bring the same focused teamwork tomorrow night for Game 2 that we had last night in order to beat them again. And even if we are able to win tomorrow and protect home court advantage, the KD led Oklahoma City Thunder are one of only two teams that have forced the Spurs to surrender a 2-0 advantage in a seven game series during the Tim Duncan era (2012 Western Conference Finals). The 2004 Los Angeles Lakers were the other team to force the Spurs to blow a 2-0 series lead and Derick Fisher was one of the biggest contributors to that comeback series win. While I will go to my grave believing that if it is impossible to catch and shoot in three tenths of a second, then it must also be impossible to catch, TURN, and shoot in four tenths of a second, the Spurs have plenty to be focused on in the here and now. The Oklahoma City Thunder, even without Ibaka, are one of the most dangerous opponents that the Spurs have faced in recent playoff runs and we must be locked in for 48 minutes in order to beat them. The old gunslinger, Derick Fisher, will be trying to round up a posse that can keep the game close tomorrow night and put him in the position to have a shot to rob the AT&T Center blind one last time. But as long as the #BlackAndSilver play as a team and look out for each other by keeping our eyes on the fastest draw in the west from all along the watchtower, San Antonio will put ourselves in a position to show Oklahoma City how insurmountable a 2-0 series lead might be in 2014.