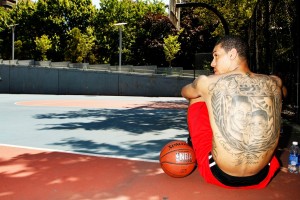 All Along The Watchtower – There are two things that you need to know about Danny Green. The first is that Danny Green loves animals. And the second? Danny Green lives downtown and apparently his property is conveniently located near a KFC with a great lunch special because if you give him an ounce of daylight, Danny Green gets buckets. The Oklahoma City Thunder are quickly learning that the San Antonio Spurs’ high powered offensive attack is extremely potent and in order to take something away, you are going to be forced to give something else up. Right now, Danny has his three point jumper locked in which means that his is not a poison that you want to pick. Green obliterated OKC’s undermanned roster on Wednesday night dropping three point dagger after three point dagger over the Thunder’s scrambling perimeter defenders. When it was all said and done, he had put a brutally efficient 21 points on the scoreboard on 7-10 from downtown. Through the first two games of the Western Conference Finals, Danny Green is now 11-15 from the arc and is currently making Scottie Brooks’ already difficult task of disarming weapons in San Antonio’s offensive arsenal virtually impossible. Oh my goodness, my apologies. There is actually one more thing that you need to know about Danny Green. Besides loving animals and living downtown, Danny also enjoys dabbling in public relations during his free time. His passion for the sanctity of the written word was undeniable earlier this week because Danny, who earned player of the game honors, was able to find some time in his busy schedule to serve as the head writer of the emphatic 112-72 Game 2 statement that the Spurs authored Wednesday at the AT&T Center.

If the 2-0 cushion that the Spurs have laid out for ourselves in the 2014 WCF seems familiar, that is because we have now put ourselves in this position for the third straight season. If this familiarity somehow seems eery this time around, it is probably because we blew the first of these 2-0 WCF leads two years ago against this very same franchise. However, while the skeletons of that terrible collapse (the Spurs lost 4 straight to relinquish the 2012 Western Conference championship to the Thunder) are souring what is otherwise quite a joyous time to be a Spurs fan, it is important to remember that while this is the same franchise that turned the tables on us two years ago, it is not the same team. James Harden is not walking through the door to lace ’em up for OKC alongside Russell Westbrook and Kevin Durant tomorrow night at Chesapeake Energy Arena. Serge Ibaka is not walking through the door to lace ’em up for OKC alongside…wait (Jon Stewart Daily Show-esque pause to listen to the voice in my earpiece)…I’m being told that Serge Ibaka is probably walking through that door. In a stunning development that could also be labeled as the least surprising news to come out of the 2014 NBA playoffs, the Oklahoma City Thunder have announced that Ibaka’s status has been upgraded from ‘out for the remainder of the playoffs’ to ‘day-to-day.’ While the return of Serge Ibaka will certainly galvanize a Thunder team that needs just such a jolt to rebound from the shellacking they took in San Antonio, we should also keep it in mind that Gregg Popovich and the San Antonio Spurs are carrying the same skeletons from the 2012 series (which are currently clouding over the Alamo City’s otherwise jubilant demeanor) up to Oklahoma City with the team this weekend. The Spurs will arrive up there ready to play basketball with the ‘appropriate fear.’ The core unit of the team that blew that 2-0 series lead in 2012 is walking into Chesapeake Energy Arena tomorrow night, not only playing as a superior unit to the 2012 squad, but also focused on not repeating the mistakes of the past. So, yes, this Spurs fan hopes that the Thunder are at full strength for tomorrow night’s contest and that Serge Ibaka is able to add something to that team that was clearly missing here in San Antonio. I am confident that even with the defensive presence of Ibaka on the other side of the basketball, the Spurs will show the Thunder that their trouble in keeping pace with us has had less to do with their injury woes and more to do with the fact that we are simply too hot. If the #BlackAndSilver continue to play our game, our good neighbors to the north will receive the press release soon enough that there is a man from San Antonio who lives downtown, loves animals, and gets buckets.